75 years ago, the world celebrated the end of World War II in Europe and one of the most important events of that days was the Berlin Victory Parade. In honor of the Victory anniversary, Gaijin Entertainment has created a virtual reenactment of the Berlin Victory Parade of 1945 inside War Thunder – an online game featuring hundreds of historically accurate military vehicles from that era and beyond. The video will be available on War Thunder’s YouTube channel today at 22:01 (UTC), precisely 75 years after the World War II in Europe ended.

The historical Berlin Victory Parade saw thousands of soldiers and officers from USSR, United States, United Kingdom and France marching together in the presence of Marshal of the Soviet Union Georgy Zhukov, General George S. Patton, General Brian Robertson and General Marie-Pierre Kœnig. It was one of the few moments in history when almost all of humanity stood united. 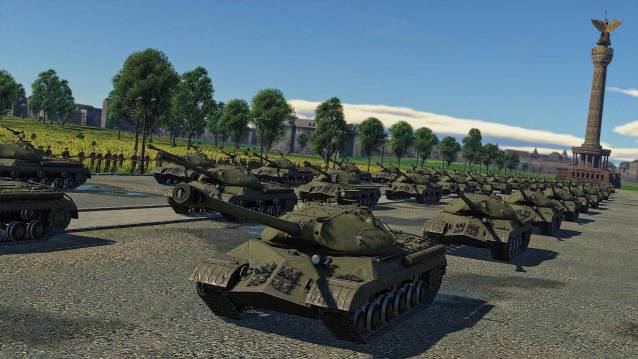 “75 years ago the whole world came together to celebrate defeating the ultimate evil. It’s important to remember this moment because nowadays the world needs to come together again to defeat a new common enemy that is attacking us all,” said Anton Yudintsev, founder of Gaijin Entertainment.

War Thunder version of the parade was made as close to the original as possible, with all military vehicles looking exactly as they were at that moment. The only major change is the air component of the parade that was absent at the real parade 75 years ago and was added to the virtual one in order to honor the pilots of Mustangs, Spitfires and Yak-9s who served in World War II.

War Thunder is a free-to-play, cross-platform, massively multiplayer military masterpiece with millions of fans worldwide, that allows players on PC, PlayStation®4, Xbox One, Mac and Linux to fight their way across air, land, and sea in the same battlefield. War Thunderoffers 1,500+ playable aircraft, armored vehicles and ships from the early 1930s to the 2000s. The US, Soviet, British, German, Italian, Japanese, Chinese and French military vehicles represented in game are carefully researched, historically accurate recreations of their real world counterparts. Fans can expect hundreds more added as Gaijin Entertainment commits to ongoing development via regular updates. Official website: War Thunder