Planetside 2: The Good & The Bad

Planetside 2: The Good & The Bad

Planetside 2 is a fast paced faction based FPS where the New Conglomerate , Terran Republic and Vanu Sovereignty go up against each other in a 3 way battle for the planet of Auraxis in a constant territory battle. Play as different class types, drive ground vehicles and fly aircraft in this infantry vs armor vs air PVP focused war.

6 Interchangeable Classes - Switch between Light Infantry, Heavy Infantry, Combat Medic, Max , Infiltrator and Engineer classes, each of which has their own gear, skills, play style and ways to contribute to the battle.

3 Factions - Choose from the Terran Republic, New Conglomerate or the Vanu Sovereignty as all fight for their own faction trying to take control of different point capture territories and controlling entire continents.

Infantry vs Air vs Armor - Players can switch freely between the different infantry classes, various ground vehicles such as tanks and APCs, and air vehicles from carriers to fighters all of which are able to fight with each other on the same maps.

Construction - It is now possible to focus on harvesting resources to enable your faction to build mobile bases complete with turrets, walls, barracks and more.

Highly Customizable - Each unit can be customized with their own certifications that allow you to unlock new gear, attachments, equipment and more for infantry classes and all vehicles.

Epic Environments - With the different continents of Auraxis players will battle across arctic tundra, jungles , deserts and forests with various bases and strongholds to attack and defend.

Mass Combat and Skirmishes - Literally hundreds of players can be fighting together at the same time creating an awesome war-torn conflict feel or players can take smaller groups to take smaller facilities in more skirmish-like battles.

Player Balancing - All players are thrown into the same battles regardless of their gear and levels, which can mean more than a few one shot deaths and a new player simply can't go one on one with a higher Battle Rank player.

Bad Drivers - Some people need to pass their in game driving license because getting run over and killed by hapless tank drivers is far... far... too common place.

Very Team Reliant - Unless you are with a large group of players it is nearly impossible to get anything done and can feel quite boring when you're in anything other than the larger firefights at peak times.

A Little Repetitive - The game is essentially an endless three way team based point capture (just on multiple huge maps with multiple points to capture); after a while battles can all kind of feel the same and some different FPS game modes within the game would add a lot of variety.

Earning Certs Takes a Long Time - The game is free to play, and players earn Certs and XP by completing objectives, capturing or defending bases, and getting kills; however, it takes an extremely long time to earn enough certs to feel competitively kitted out.

Off Peak Times - During out of peak hours the game world is just far too big for the size of the population and it feels completely empty with players spread out over four huge continents. 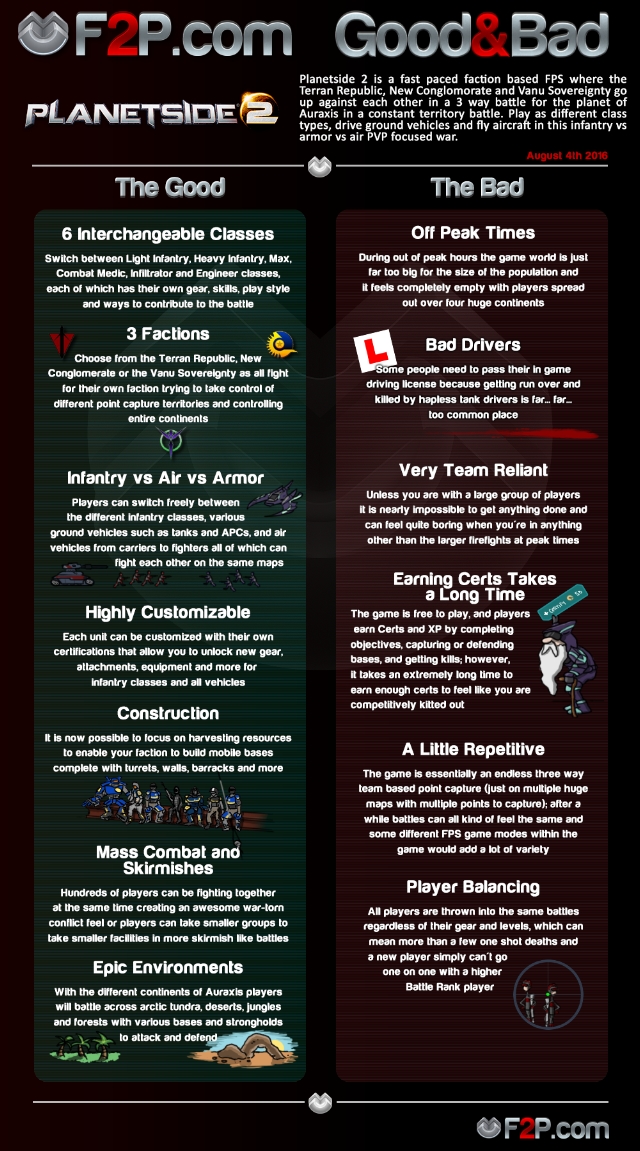