Heroes & Generals: The Good & The Bad

Heroes & Generals: The Good & The Bad

Heroes & Generals is a combined World War 2 FPS and RTS where players can take on the role of Generals who manage resources trying to dominate a campaign map for their faction, whilst other players battle over each territory in FPS battles. The game has a lot to offer and definitely a unique gameplay, but there are still a few things that hold this title back from being truly great...

Cause and Effect - Generals can distribute soldiers around the campaign map which determines how many lives the team has in their Hero battle. Real time cause and effect allows Generals to push resources around the map that benefit the players, and the players victories will give the Generals more resources to play with.

Victory Conditions - The game can actually be won, broken down into a War phase lasting around three weeks if players manage to dominate the campaign map for their faction then they will win and the game is reset.

Walk Before You Run - As each player plays an important part in the game, with each death taking from the teams pool of Lives, players are required to reach Level 5 before they can join the war campaign so that new players don't use up General resources by dying whilst they are still learning the game

Spotting System - Players can really utilize terrain cover and camouflage in battles as they are not highlighted until they take a hit from an enemy or fire, meaning players can use stealth and even setup ambushes against the enemy.

Vehicles -There are lots of vehicles that can be used in combat with tanks and planes, turret mounted jeeps that can carry players around the map and even bicycles for infantry to quickly move around.

Slow Upgrades - The speed that money comes in is extremely slow in comparison to how quickly it goes back out, meaning paying for upgrades takes a very long time and feels quite grindy.

Repair/Consumables Costs - All gear takes damage meaning players have to spend even more in game cash to actually play with ongoing maintenance costs; similarly players have to purchase consumables such as grenades or rockets; meaning every kill has a price tag.

Limited Maps - Whilst the campaign map is large with lots of territories, it is a lot of the same recycled maps over and over and new maps aren't added at a particularly fast rate.

Can't Switch Characters - You're stuck with the character you chose when you enter a battle; as some battles can last a really long time if Generals are pushing in resources, but if your team composition is bad then you're stuck in a losing game unable to change to a character that might be able to actually help. 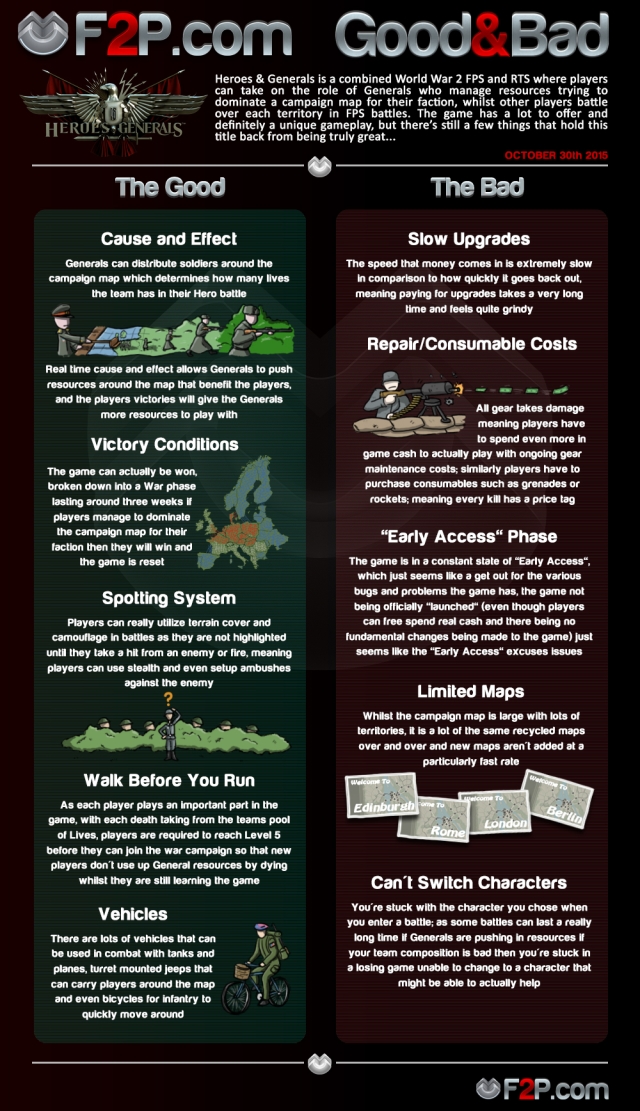