Propelled into an unknown part of the galaxy the battle between Cylons and Humans continues to rage on. In Battlestar Galactica Online player get to swear their allegiance to one of these two mighty factions embroiled in war and battle it out in galaxy wide PVE and PVP combat. A free to play MMO adaptation from the award winning sci-fi TV show, let’s find out the best and worst about the game...

It's Battlestar Galactica! - Fight alongside the Colonials or the Cylons in the battle for territory, resources and survival in an unknown part of space; interact with and get missions from key characters seen in the TV show

Full 3D Space Movement - Control your ship and fly through full 3D space in 360 movement; combined with good graphics the game holds up well for an older browser title and does well creating player immersion

Tactical Combat - With the 360 degree space simulator movement and various personal customization options, the combat players have in the game is fast, fun and fairly strategic allowing for some awesome dogfights

Mining System - As a conflict focused theme we're fine that BSGO doesn't focus too much on crafting, so the mining system where players can blast asteroids with cannons or place down Industrial Mines that flag up on the system map for all enemies to try and capture leading to a defensive battle!

PVP Oriented - Battlestar Galactica is about... well... battles, so thankfully the main focus of the game is about the conflict between the Cylons and Humans, which adds some PVE missions but heavily focuses on the PVP conflict between player factions

Too Much Freedom Too Soon - After the very heavily story driven and mission focuses tutorial players are kind of thrown out into the open space with not much direction on what to do next or how to do it, which is a little unfriendly and unintuitive for new players to the game

Heavy Cash Shop Implementation - Players can buy practically everything from the cash shop, including ships, upgrades, weapons, special ammo and more; with some items being exclusive to premium currency, providing a very pay to win system that imbalances PVP

No Trading - Lacking a facility to trade with one another or buy and sell through auctions and public markets, the game heavily restricts individual progression through other players helping them with currency, materials or gear, so it's even harder to catch up without relying on the Cash Shop

Dead Space - More so in certain sectors of space, and undoubtedly due to the diminishing playerbase and slowed rate of new player signups, the explorable space can feel very empty of players that, whilst an apt reflection on reality, is a little dull for an action MMO

Windows Only Client Switch - Whilst initially a browser game accessible to everyone the developers took a step backwards in limiting its cross platform access by switching to a client based game only supported by Windows, meaning Mac players who had invested time and money into the game over the years were left out... 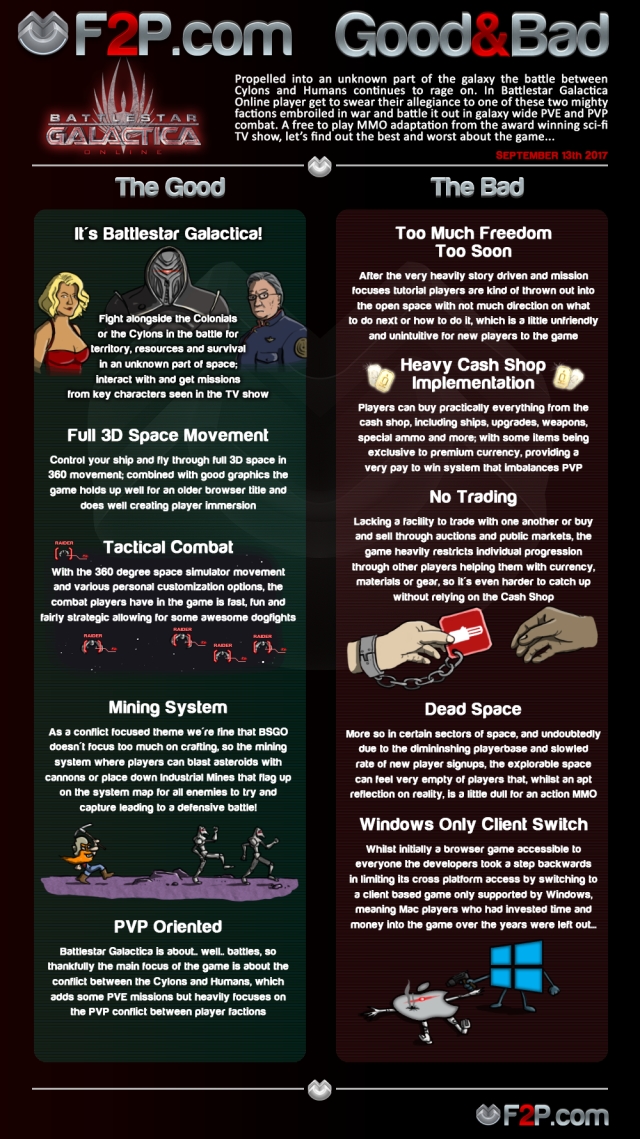 
One Comment - "Battlestar Galactica Online: The Good & The Bad"