Loyal to the Battlestar Galactica franchise | Dogfights are fun

Lack of direction | It can feel a little empty

If you are a sci-fi addict or if you just like good TV series’, chances are that you have already heard the name Battlestar Galactica, a sci-fi show from 1978 which was rebooted back in 2004 becoming a huge hit and bringing the franchise to a way wider audience. In 2011 Bigpoint decided it was time to make all the Battlestar Galactica fans happy by launching the open beta of a new browser-based MMO based on this popular franchise: Battlestar Galactica Online.

Being fans of the show ourselves and feeling a little nostalgic lately, we jumped into the game to check it out, hoping to feel again the atmosphere and the magic of the TV series.

As is typical nowadays, the registration process was quick and painless, and all we had to do was to click on the “login with facebook” button. The first thing we had to do was to choose our faction: Colonials or Cylons; for those of you that know nothing about the show (go and watch it, seriously, is frakking good!), the first are humans, who are fleeing from the Cylons while trying to reach the promised land after the destruction of their colonies, while the Cylons (A.K.A. Toasters) are robots created by humans to be servants, who turned against their masters and disappeared into deep space after a huge war and now are back to take their revenge and destroy mankind. We wanted to meet once more with Commander Adama, Starbuck, Chief Tyrol and all the other characters from the series, and we also wanted to pilote a viper really badly, so we chose the humans and were taken to the character creation screen; this is very simple, giving you access to a limited choice of preset faces, hairstyles, clothes etc. to customize your character. However, from what we’ve seen in the game, your character’s appearance is only a mere “roleplaying” element, as you won’t see him/her again with the exception of the Pilot Log (character’s info screen).

We were then welcomed by a chain of simple story missions that work as a tutorial, aimed to help you to learn the ropes of movement, combat and asteroid mining. The game’s controls and combat systems are an interesting mix of action and tab-target. Basically you see your ship from a classic third person view, using the mouse wheel you regulate your speed, holding the right mouse button and moving the cursor around you will make your ship turn in that direction, with the left click you can select your target and interact with the UI, the WASD keys are used to shift your ship up, down, left and right, and the space bar activate your boosters; there are also other keyboard shortcuts but these are the basic controls. At the center of your screen there is a reticule and when you are aiming at an enemy with it and the target is at range, your standard weapons will fire automatically. The whole thing is a little tricky to get used to and sometimes feels slow and unresponsive; of course it could be that we were totally noob and we needed practice, but e.g. Star Conflict use a similar control system and it’s way more intuitive and easier to grasp.

After the tutorial we docked to the Galactica (even if you only manage to see the bridge )and met some of the most famous characters from the show: Commander Adama, Starbuck, Apollo and Chief Tyrol. They are the key NPCs and offer you story missions, daily missions, the possibility to repair your ship, use the DREDIS (a sort of mini-game that will reward you with items and currency) and access to other services. 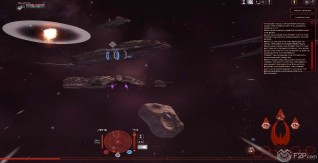 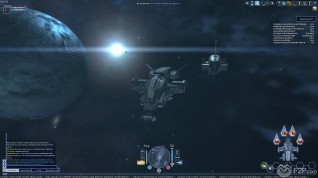 Basically the core of the game is a mix of mission based gameplay and free exploration around the sectors to fight cylons, gather new resources and earn money to improve your current ship, buy more and better ships and learn new skills by spending money and real time (more or less EVE style). A very frustrating thing is that after the initial – and very basic - tutorial about movement, fighting and mining, you are given very little direction. We didn’t know how to use the several menus, how to decipher the complex weapon and items stats pages, how to customize and upgrade our ship, how to join PvP, what we were able to do and so we felt totally lost. Sure, there is a complete guide to read if you click shift+h, but going through tons of pages just to learn what you can do when you have just arrived in the game and want to shoot things is not exactly fun. So we went on with the story missions assigned by Commander Adama and faced several Cylons, escorted colonial ships, gathered resources and so on, until he told us that we needed to be more “experienced” to have acces to the next mission. At this point we tried a little of exploration, jumping around safe and more dangerous sectors, fighting against the occasional enemy drones and joining some kind of “dynamic events” where we had to protect colonial ships that were being attacked by enemy forces (we don’t know if there are other kind of events or if this is the only one available…). During our journey we didnt’t meet a single other player, only NPCs, and the whole world felt a little empty and boring after a while.

The graphics, fully 3D and powered by the Unity engine, are quite nice but are starting to show their age if compared with the latest Unity games. However, the engine is light and stable, and allows for spectacular space battle. The characters’ model aren’t detailed and as polished as the ships and asteroids/planetoids ones, but you’ll be flying your ship most of the time anyway, so it’s not a big deal.

Battlestar Galactica Online is a fun and unique browser game which offers fast paced dogfights in space and enjoyable 3D graphics. Based on the popular Battlestar Galactica franchise, the game is aimed to the fans of the series and the sci-fi lovers in general. However, the game suffers from a couple of flaws that prevent it from shining, such as a general feeling of emptiness and a total lack of direction after the initial basic tutorial, which could drive new or casual players away.

If you want to know more about Battlestar Galactica Online, check out our first look gameplay commentary video and visit our profile by clicking on the info button below.