The West: The Good & The Bad

The West is a free to play browser MMO strategy of daring cowboys and menacing bandits in the Wild West. Build up your own desperado and wander from town to town across a huge open world and seek out adventure and duels against real world players. Let’s take a look at both the Good & Bad of InnoGames’ cowboy strategy...

Balanced Currencies - Whilst the game does allow a premium currency that can be bought with cash, typically used for buying various RNG chests, some shops and certain item purchases only use play to earn currencies

Build a Town - Players are able to build up their own town, or join other players and work collaboratively to build one; putting in money to improve buildings and services and also provide players with some home turf bonuses in PVP

Tactical Combat Aiming - Players can choose the points that their character will aim at in each round of combat (e.g. head, arm) as well as the direction they will move in to try and dodge their enemies` target

Lots of Waiting - For such an exciting theme the general gameplay can be quite boring and revolves around constantly sitting waiting to travel to an area, or waiting for a job to be completed, neither of which have any player interaction once initiated

The Old West - The game is pretty old now and with that comes the typical things you would expect of an aging title; dated graphics, low player population and clunky mechanics that hold less appeal for modern MMOs

Un-Heroic Story - Playing the part of the grizzled desperado wandering from town to town, seeking out enemies and challenging other cowboys to showdowns is overshadowed by the amount of menial tasks you have to do like picking cotton and shovelling out pig stys in order to make a living…

Repetitive Grind - It taking a long time to complete content is one thing, the fact that it's the same kind of content repeated over and over just makes it worse; the same jobs, fighting NPCs for the sake of it, there's little direction and so gameplay revolves around constantly grinding quests until you need to move to the next area

Adventure System Matchmaking - Due to limited low level players, even though level 10 players can join the PVP mode they can still end up in teams with and against max level 150 players, which makes their usefulness in the battle extremely limited and forces them to hide a lot, which isn't particularly fun... 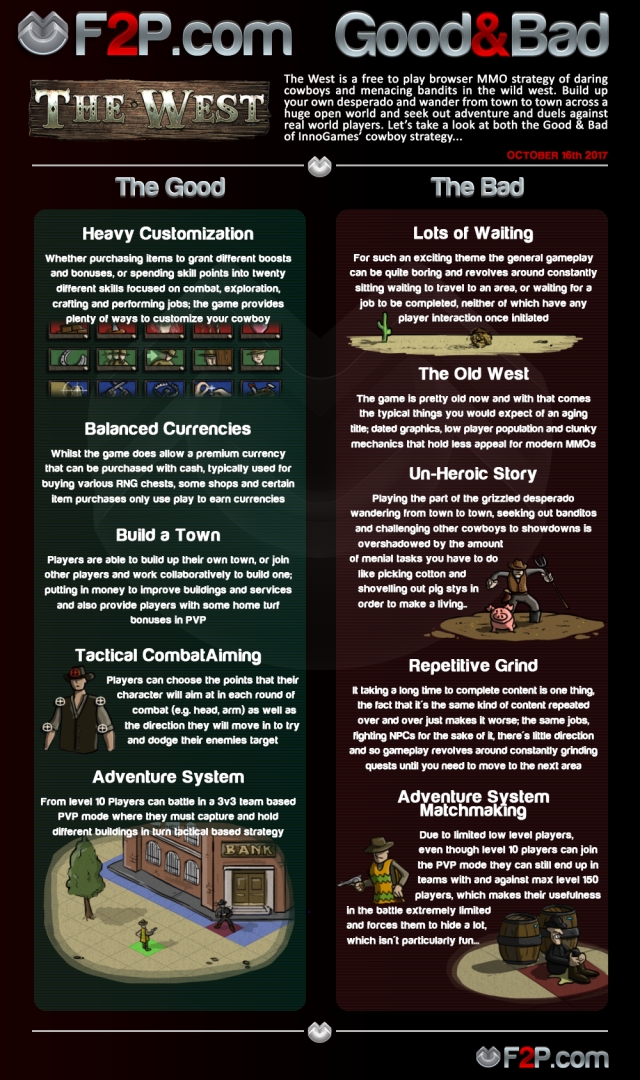