Warface: The Good & The Bad

Warface: The Good & The Bad

Warface is a free to play modern day first person shooter where players can battle through multiple maps and modes as different soldier classes; featuring PVE and PVP and fast paced combat. In our Good & Bad we’ll take a look at what we think the pros and cons are of the game.

CryEngine Graphics - There is no doubt that the thing that stands out the most about Warface is the stunningly realistic graphics and physics, from environments, models to effects, all developed on CryEngine

Awesome Coop Mode - Co-op is a fun PVE experience where players have to work well together, covering different classes and facing tons of enemies and some pretty powerful boss characters, battling them through various difficulty settings

Team Support Actions - Teammates are able to use unique abilities such as helping each other climb walls with a quick leg up or pulling someone onto a ledge; it adds a more realistic sense of squad based teamwork

In-Match Customization - There are a variety of mods and tweaks to alter your weapon on the fly during a match, shaping it to the circumstances at hand with various under barrel scopes, grenade launchers and more

Sliding - A small but extremely fun feature allows you to slide along the ground mid-run, useful for getting under gaps in walls, quickly dodging incoming fire or doing an slide attack granting extra XP for a kill

F2P Version of Popular FPS Games - Warface is similar in many ways to many popular PC/Console First Person Shooters such as the Call of Duty and Battlefield franchises, offering a similar playstyle, but is available to play for free

Pay 2 Win - You can purchase RNG Weapon boxes with real cash that offer items far better than free ones; and whilst skill is still important it is enough to tip the balance at high ranked play

Unlocking PVP Modes - You have to level up to gain access to new PVP modes, which is an unfortunate restriction that puts these new modes in the "Professionals" tier

Unsupported Regions - The game only allows you to join servers where your ping isn't too high as to cause a problem for other players and keeping you to your region servers; unfortunately Oceania and Asia don't have servers and they get kicked from the other region's servers for high ping!

Only 4 Classes - With only a Sniper, Medic, Engineer or Rifleman in the game, four fairly generic classes as seen in practically every modern day shooter of this type; very uninspiring and unimaginative

Gear Maintenance Costs vs Slow Income - With armor and a primary and secondary weapon the exorbitant costs of maintenance repairs on your gear makes it increasingly more expensive to keep using them; players are constantly forced to spend their earned currency to repair instead of upgrade and buy new items 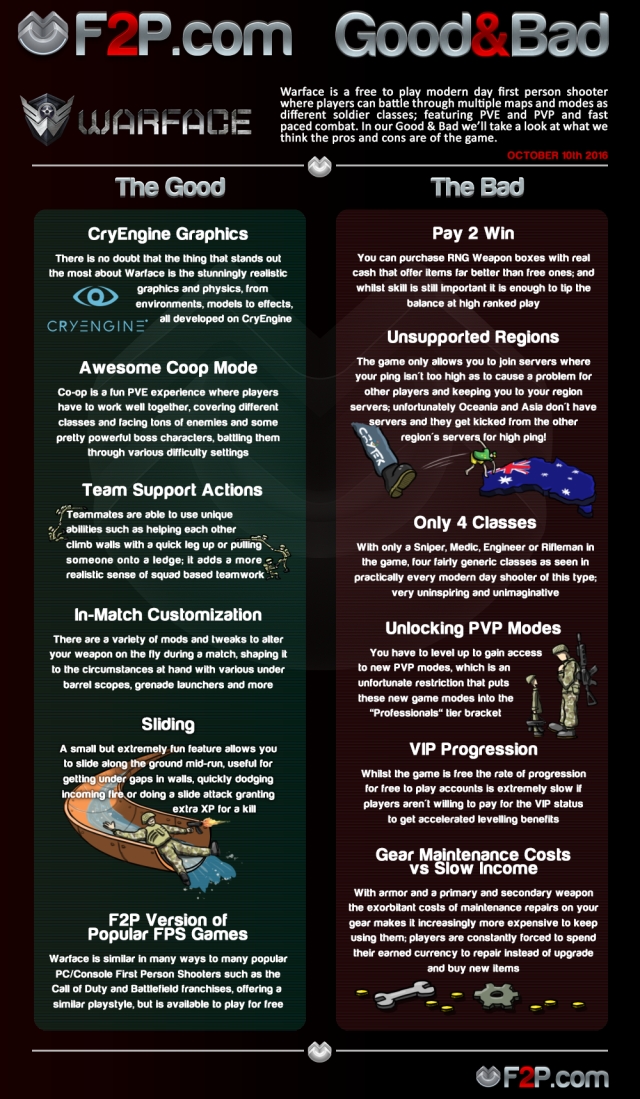