In our latest F2Peer Review we hand Triad Wars (United Front Games) over to our frequent community members to give us their feedback, now that the game has been opened up for anyone to download and play we thought we’d put it through its paces. Set in Hong Kong prior to the events of single player game Sleeping Dogs, Triad Wars sees your own personal character rise with aspirations of making a name for themselves among their chosen Triad faction. Featuring open world sandbox content, a variety of missions, explosive and dynamic graphics and a personalized Turf system to build up your own rackets, the game has a lot of potential and in our eyes is a winner, but what did our players think? 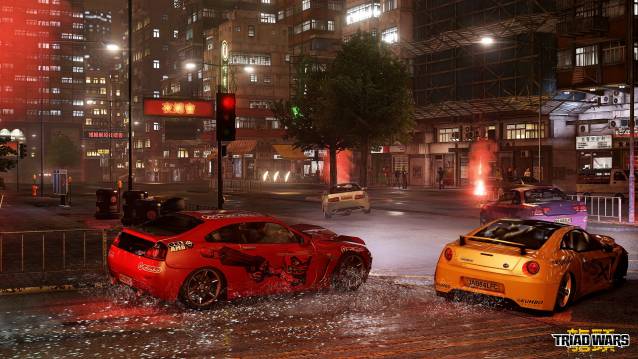 The only real competitiveness to Triad Wars is the attacking of other players turf, which is pretty fun, but it doesn’t quite have the feel of PVP, neither in the combat sense or the idea that you’re beating another player as you’re solo and fighting against AI all the time. It’s enjoyable enough but I’d love to see some sort of option where you can maybe only attack other players Turf when they’re online and they get notified, so they’re able to jump in and take over their own Enforcer bot to have some real PVP. Whilst the inclusion of Favor cards could imbalance that, such as a player turning up decked out with higher health, if you got notification your turf was being attacked and you could instantly spawn into the safe house you’d still have time to switch to a defensive deck. That would be really cool.

As someone who loves Grand Theft Auto I really enjoyed Triad Wars, the open sandbox world allows me to just drift around and go kill crazy without worrying too much about levelling up to be competitive, I can enjoy the game regardless of my level. There is a little bit of repetitiveness to the game sometimes, so I think playing casually is actually a benefit to me as I don’t get bored of the similar missions and content and enjoy the game each time I load it up and the turf wars feature is pretty simple and doesn’t require too much micro-managing.

I really like the Favor system and being able to rack up cards by completing quests was a pretty cool feature, being able to collect them and edit your character on the fly depending on the situation was very interesting and opened up a lot of options. I love stealing cars and driving around the city, making note of where the really cool ones were; I found quite a few but couldn’t find a way to add them to the garage, which is a shame; having the ability to try and collect Fire Trucks and Riot Vans would be a pretty cool implementation. 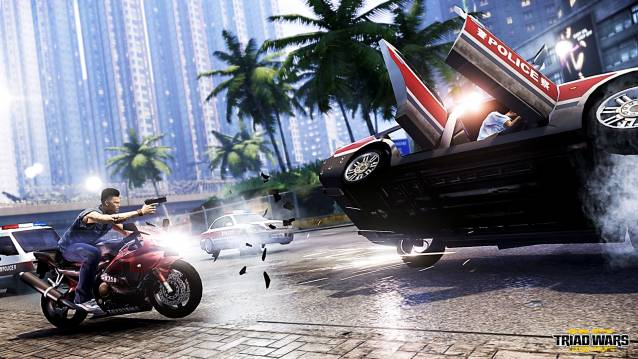 You can’t fight other people. You can’t group with other people. You can’t chat with other people. What was even the point of making this game an online game (though I noted they were careful to not use and variation of “MMO” which online games general default to, so at least they know that there’s no Massively element). Whilst the Turf system brings an element of competitiveness it doesn’t add to the multiplayer aspect of the game as it’s all AI controlled and is only useful for having a p***ing contest to see who has the best Turf… not really multiplayer is it?

The world is pretty impressive; whilst a lot of the time you find yourself in the main streets and back alleys, that can all look relatively similar, occasionally you come across a really cool location you didn’t expect like a big park with a pond and a bridge and lots of people sat down outside a café. Smashing through the park in a car and watching the chaos ensue is pretty fun and the brutality of the game really makes no bones about it that you are a bad guy. The gore and blood splashes when you shoot people, the ragdoll effects as they bounce around inside their vehicle as you unload a clip into it… it’s surprisingly realistic and really makes you feel like you’ve just done something pretty awful. Very fun!

The game looks and plays great, the ragdoll physics are impressive (though we wish headshots were insta kills instead of just a hit zone that deals more damage) and the cinematics in car chases when you blow out a pursuing vehicles wheels and make them flip is like something out of a John Woo movie. The biggest problem is that the quests are fun the first few times, but things do start to repeat themselves quite quickly, though the quests do change up a little, the core of the game is a bit of a cycle and I think it will appeal more to a casual crowd.

For a free to play game Triad Wars is pretty fun, definitely a great way to blow off some steam and vent your anger on innocent civilians or the police and go on mad rampages. Unfortunately as good as the game is I think it will always be compared to, and overshadowed by, Grand Theft Auto, which has so much more that you can do in it and has a true Multiplayer/MMO element where you can work with other players. Every element of Triad Wars feels like a single player experience, which isn’t what I want from a multiplayer game, again, if I want a single player dominated experience where I’m stealing cars, killing people and being a tough guy… I’d shell out a few bucks to play Grand Theft Auto.

So that’s what our players think, but what about you? Do you play Triad Wars? If not then why not? What do you like or hate about it, and what do you think about our players’ opinions? Let us know in the comments!