RIFT: The Good & The Bad

RIFT: The Good & The Bad

RIFT is a free to play fantasy MMORPG set in a world of magic and monsters. Players can choose from a variety of races and dozens of different character class types, engage in multiple PVP and PVE features and enjoy all the staples of a traditional quest based MMORPG. Released in 2011 the game has many great and poor qualities that it has accrued over the years.

6 Playable Races - There are six customizable races including those original to the world of Telara, each race has its own unique racial traits for extra boosts.

5 Callings with 46 Souls - There are five core classes to the game (Mage, Cleric, Warrior, Rogue and Primalist) and between them 46 unique specializations that give different abilities that define the souls playstyle.

Chronicles - Raid-style dungeons that can be completed by one or two players, making end game epic story content available to everyone and every character feeling like a true hero.

Zone Invasions - When a rift opens and the enemies pour from it players will have to react and defeat them otherwise they destroy strongholds and NPCs if left to run rampant.

Dimensions -Player and guild owned instances where players can craft their own environments and locations from items and building blocks that they have acquired.

End Game Grind - Whether doing the same daily and weekly quests and the same dungeons to get Marks or gear, the content is very repetitive and needs to be done A LOT in order to get what you want; very tedious.

Pay-2-Play Elements - Ranging from a paid for earing slot and locked equipment (even for Patron subscribers) the game isn't so subtle about the paid advantages and subsequent devastating grind for F2P players.

Uninspiring - The game feels very generic, whilst everything it does, from features, graphics and environments it does fairly well, there's very little that stands up and feels truly innovative.

Imbalanced PVP - Some Souls are way too overpowered, particularly ranged classes due to being weaker in PVE and buffed, making playing melee spec fairly pointless.

Pre-requisites - There are too many hoops to jump through before you can use top gear; different currencies, faction notoriety, resources/materials as well as needing them in abundance. 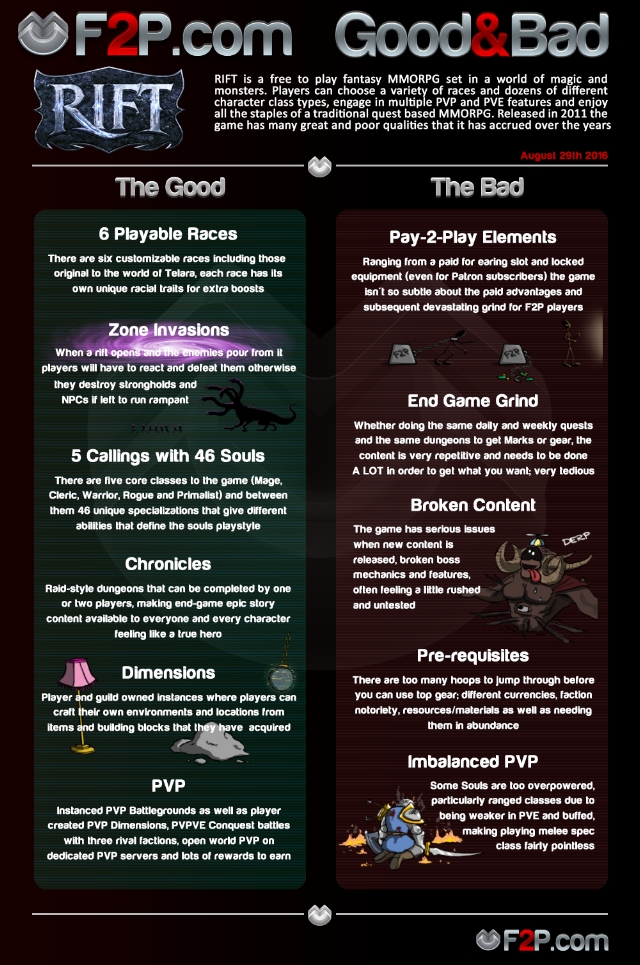