Developed by Reto-Moto, Heroes & Generals is an ambitious project which aims to bring a real WWII experience directly in your browser. This interesting MMO is actually two games in one, as you can choose to jump in the heat of the battle and play as a soldier in a massive FPS experience, or take the role of the general who devises the grand strategy. The two parts of the game are two sides of the same medal, as players will play together, interacting with each other in the same huge campaign, trying to bring their faction to the victory. Impressive concept, right? Let's see together if the actual game lives up to the expectation. 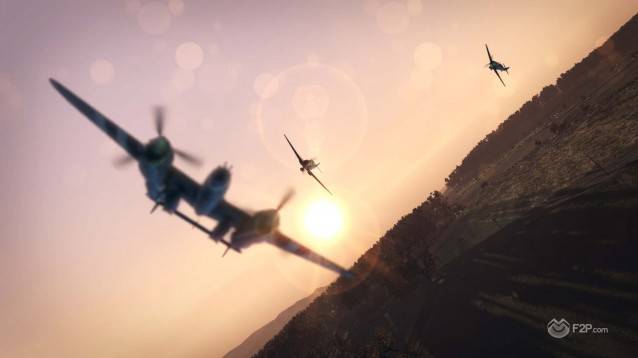 Sadly, we weren't able to try the strategy game as you need to unlock your first troop of soldiers first, and you do that by spending one of the three currencies of the game; too bad that the price is so high that you need to grind a bit or purchase the premium currency with real money. We didn't manage to reach that point, but even without playing we had the chance to take a look at the huge real time map, that showed us an intricate web of connections between the points of interest of the two factions and the currently active battles on the contested territories, which are being played in that moment in the action game (the FPS part of the game). You can move troops, conquer territories and help by creating supply-lines. This part of the game seems to be really cool and our hands were itching for the desire to try it out. Oh, well... maybe in the future, after playing a little bit more.

But let's talk about the real star of our experience in Heroes and Generals: the action game, A.K.A. Saving Private Ryan goes full FPS. The first thing to do is to choose your faction and join a war campaign; for that campaign you will be locked with the chosen faction. A campaign lasts a bunch of weeks (real time) and after its conclusion you can choose again which faction you want to play for the next one. We chose the Allies, as killing Nazis never gets old, and were welcomed by a very quick tutorial which shows you the basic controls. Nothing that you wouldn't get by yourself in a few seconds if you have ever played an FPS in your life: WASD + mouse to move around and shoot, shift to run, mouse wheel to change weapon, you know the drill. However, the tutorial lets you also try a couple of tricks, such as destroying a jeep with grenades, using an anti tank weapon and gives you the opportunity to try the joy of destroying an enemy plane with an antiaircraft turret. Cool. 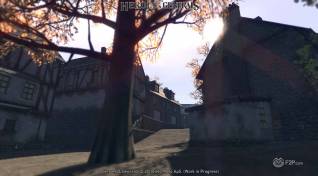 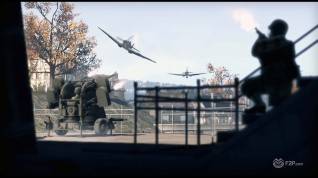 The tutorial left us excited and ready to shoot at Nazis so, without hesitation, we queued for a random game; however, you can also manually select the match you want to jump in through a list of currently available matches. The game modes are usually focused around capturing neutral points of interests and enemy bases on the map, defend them and pushing through the enemy territory.

The first thing we noticed during the first match is how well the developers managed to recreate the WWII atmosphere. A lot of modern days shooters only focus on the "shooting part" of the experience, considering the atmosphere of the game as a secondary elements. However, this is not the case of Heroes & Generals, as the game features a perfect mix of graphics, sounds and gameplay choices that make you truly feel as though you are a soldier crawling on the dangerous battlefields of WWII with his comrades. The maps are huge and diversified, offering different scenarios and elements like woods, open spaces, ruins, rivers with bridges and narrow passages, which truly affect your gameplay experience and the tactical possibilities. 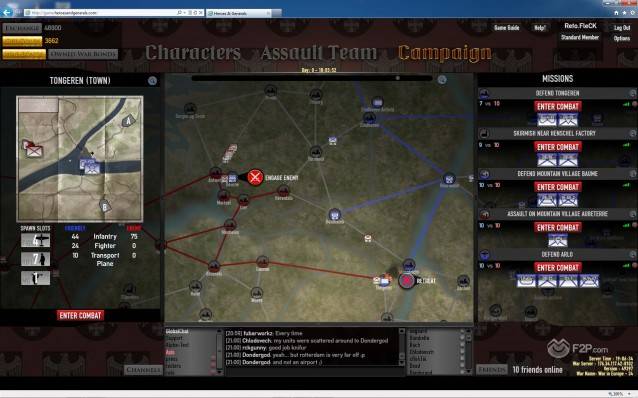 The controls are usually responsive enough, but they can feel a little inaccurate or laggy in certain occasions, like when you repeatedly do short sprints or try to interact with objects such as ladders or vehicles. We also encountered some gameplay bugs; for example one time we were humming in our jeep through a nice country road and we've suddenly been launched 300 meters in the sky out of the blue, without any reason at all, dying because of the fall.

One thing that we really liked is the sense of realism that the game gives you. It's really easy to hide in the vegetation, on the ground, between the rocks on a hill, and there aren't big flashy names on the heads of your enemies if you accidentally hover your crosshair over them. The lights and shadows effects help with that, so it's totally possible to pass next to an enemy without seeing it or setting up ambushes. Moreover, it usually takes two or three shots to kill someone, but the weapons are quite precise so usually it's a lot better to stay calm behind cover and try to aim at the head for an headshot than jump around with a "spray and pray" style.

Another important element of gameplay is the vehicles. On the first beginner maps there are tanks, jeeps and even bicycles. You can drive each vehicle and even carry your teammates with you on the available seat or weapons. Later on you will also be able to unlock aircrafts, but we can assure you that there is nothing funnier than rushing in the battle on an old bicycle with your friend on the luggage rack while ringing the bicycle's bell. Hilarious.

By playing matches you will earn XP to increase your grade and unlock career paths, new weapons and modifications and currency to buy them. You can customize your weapon with new sights, barrels, ammo types, springs and a lot of other features, but in our opinion the prices are a little high - maybe to push you to use the premium currency to buy them - and you need to play a lot before being able to buy more weapons or the best modifications.

The graphics are nice and smooth, the style is in line with the setting, but they lack in details and feel a little dated if compared with Warface, another FPS playable through browser. Still, Heroes & Generals's graphic engine is lighter and it's still absolutely impressive considering that we're speaking about a browser based title. We encountered some bugs during our sessions, such as the sniper rifle's crosshair not displaying while zooming, but the game is still in open beta so the developers should be able to fix them before the release.

The sounds feature some really nice touches of class, such as tinkling sounds when you change your magazine and the sounds of shots and explosions that become more muffled with the distance.

Heroes & Generals is a very fun online FPS, playable through browser, aimed at casual and hardcore players who are looking for a little more tactic and realistic approach to the genre, and to the WWII enthusiastic crowd as well. The graphics are light and sleek and even if there are some minor bugs, the experience is still absolutely enjoyable. Too bad we didn't have the chance to try the "strategy game" part of the project. Still, if you are an FPS player looking for something different, you should give it a shot.