Forge of Empires: The Good & The Bad

Forge of Empires: The Good & The Bad

Forge of Empires is a free to play browser strategy game where players lead their own settlement from the dawns of the Bronze Age up through history into future eras. With combat and city building content players can work alongside each other cooperatively, or face each other as rivals in competitive play.

Extensive PVE Campaign - Advancing across the world map, conquering new provinces, facing new enemies and advancing the storyline is a pretty rewarding element, and the benefits gained help all aspects of a player's settlement and isn't simply a contained feature

Hex Based Combat - The combat system is extremely tactical, using a hex based gridded map players move individual units from their built army around the map and try to out-think the AI controlled enemy

Constant Events & Expansions - The game regularly brings out events to keep players occupied with new ways to progress and new rewards to uncover, as well as constant expansions that add new Tech Era's to the game adding new upgrades, units and buildings

Great Buildings - A feature where players can work with friends/guildmates to construct unique Great Buildings, with two in each technological Age, players must work together to collect blueprint parts to build them

Guild v Guild - The ability to compete against other players as part of a guild is extremely exciting, conquering contested territories and defending your own controlled territories, which are divided up into main Provinces representing different tech eras where only units from that era can fight there

Expensive to be Competitive - Playing casually the game embraces the Free to Play nature, but anyone who wants to try and get world firsts, victories or dominate in Guild v Guild is going to be forced to spend gold on Diamonds to be able to compete against other players already doing so

Slow Progression - Whilst solo play has no time limitations, and so can be played for free, in doing so players are going to be caught up in the progression grind that takes forever to construct buildings and train units

Faux PVP - The game lacks any real PVP where players go up against each other in 1 on 1 combat; any time you attack a player settlement then the defending units you face are controlled by the AI and removes player to player interaction

Artificially Tiered Progression - Players are locked out of progressing in some very artificial ways, to sudden AI enemy power spikes where you face a force that is just impossible to defeat until you've unlocked the next units and...

Tech Tree Bottlenecks - Whilst at first glance the tech tree looks reminiscent of Sid Meier's Civilization with hundreds of techs and routes to victory, in truth periodically through the tree the technologies bottleneck into a single tech that you have to pick up that requires all the other previous techs (and their own pre-req techs) 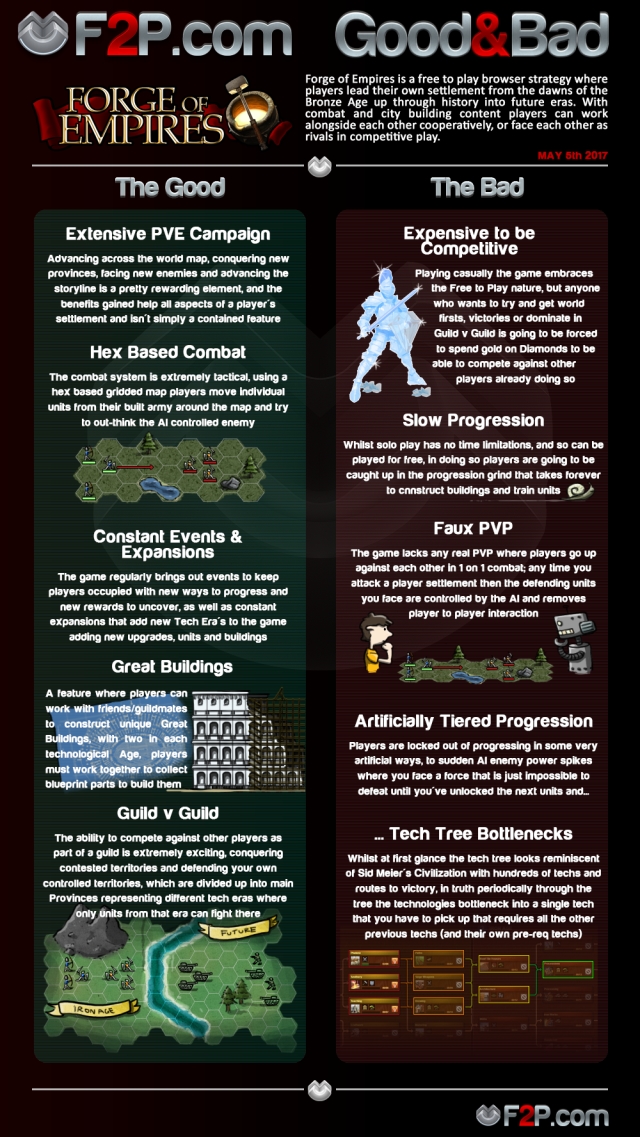