Farmerama: The Good & The Bad

Farmerama is a free to play browser title where players get to build and maintain their own farm. From planting crops, breeding animals, selling produce at the market and helping their fellow farmer, the game is a colourful farming simulator suitable for all ages. The game has plenty of good and bad points, so let’s check them out.

Self-Sufficient Gameplay - Players are able to sustain their own farm planting crops that are used as feed for animals, that use their... poop... as fertilizer to then use on crops to make them grow, to make feed for animals... etc.

No Energy - Unlike a lot of free to play farming style games, Farmerama doesn't have an Energy system, allowing players to play for as long as they like.

Free Expansions - Staying in line with the Free to Play aspects the games main expansion, Bahamarama, is provided for free and players get a whole new tropical island area to farm and new content.

Casual Gameplay - Whilst the game has repetitive grind elements it is done in a way where players can play casually whenever they have some free time, with longer cooldowns on resource replenishment and building times it encourages shorter-frequent sessions.

Premium Membership - The benefits to the game aren't particularly game unbalancing and don't offer so much to subscribers to make free players feel like they are missing out, giving access to some areas earlier or extra free resources to allow a slightly quicker progression.

Chickadee Mentor System - The game encourages cooperative gameplay over competitive, going so far as to offer a mentor system in the game called Chickadee, where veterans get to help out new players and get benefits for doing so.

Farm Supplies Store - A "Barnyard Bills" (premium currency) only shop offers some exclusive Bills-only items, whilst players can earn a handful of Bills through gameplay it is essentially a cash-advantage shop.

Graphically Inferior – When compared to its biggest rival, the ever popular FarmVille from Zynga, the game just doesn't look as good.

Hoarding End-game -There comes a time in the game, where you've collected everything that matters and are effectively just maintaining your farm; the lack of new land added to expand your farm just means items are piled into barn storage with no use; leading to boredom.

Premium Creep - Too many later events start to require spending premium currency to realistically complete them; although the game isn't directly competitive it is a collectors game and to get all the new items it feels like you are simply buying them instead of playing to earn them.

Chickadee Mentor System is Broken - Whilst the system itself is a good idea there were some major issue during its implementation that the developers lack the time or resources to fix; the result is that there are no longer available slots to become mentors and those who are mentors can't quit to free it up for someone else.
Do you have any thoughts with the article? Do you have any of your own Good & Bad points you think should be added? Give us your feedback in the comments! 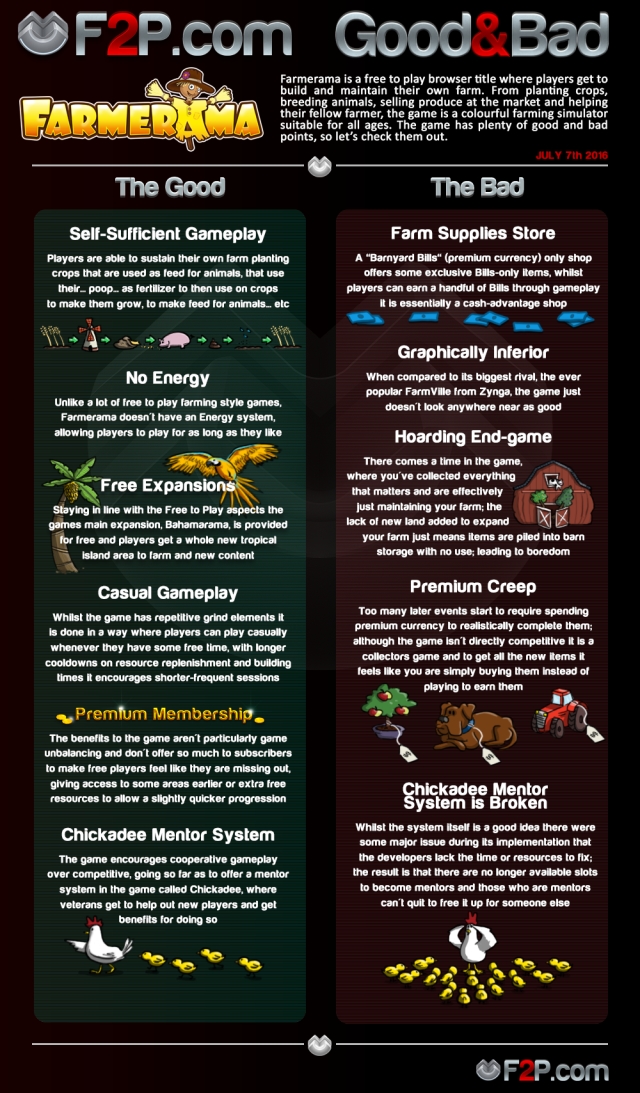