Linear in its progression, the gameplay and new content stays fairly similar throughout.

This past weekend we decided to dip into Farmerama from Bigpoint. Having been aware of the game for a looooong time we thought we’d check it out for a more detailed review and impression; as is typical with our reviews we thought we’d play for quite a few hours to get a firm understanding of the game. Things didn’t exactly go that way with Farmerama, playing constantly for hours is actually quite difficult to do and in all honesty quite unnecessary to get a succinct review of the game; but this isn’t a bad thing and we’ll explain why shortly.

The general gameplay revolved around us running our own farm, as a farm simulator this was hardly a shocker, and the process follow a very straightforward and repetitive design: we would purchase a field, lay it down in our farm plot, click it to plant some seeds, then tend to it over time to harvest crops. Similarly we could do the same with animal pens, breeding chickens, butterflies, squirrels and more, feeding and watering our animals to breed them and then typically sell them. 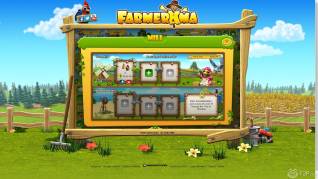 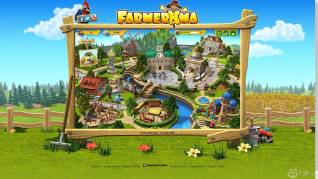 Growing crops was a little different to breeding animals, with the animals you would buy a pen or enclosure and it would take a set amount of time for them to breed, anything from minutes to hours depending on how rare/high a level the animal pen was. By giving the animals water and a specific type of food it would reduce the amount of time it would take for the animals to breed. Simple. With we would start out with as many empty fields as we could purchase and fit into our farm, clicking the field we had the option to plant any of the seeds that we owned, which could be purchased from the farmers market, the types of seeds available to us (as with the animals) was based off our farm level and so to start we had a selection of lettuces, hay, carrots and wheat. Planting these different seeds we could then water them and put fertilizer on them to reduce the growth time, we also had access to a crop dusting and super fertilizer resource that we earned through levelling up as rewards. Each could only be used once on a crop and would give a little sign to show we had used it, but each resource would drastically reduce the time it took to grow.

Once our crops had grown we could simply harvest the product and store it, with the animals we would collect our new animals but also had to clear out the pen, which became our source of fertilizer that we would be able to use on crops. In the same fashion the food that our animals needed was from the crops that we would harvest, specific animals needed a particular type of feed, usually made from one or more combinations of different crops that we could put together and produce in our barn. This self-sustaining nature between the output and use of your animal poop and crops for food was pretty nice, with the super resource buffs (crop dusting and super fertilizer) being a more premium quest reward and an optional purchase with the premium currency. 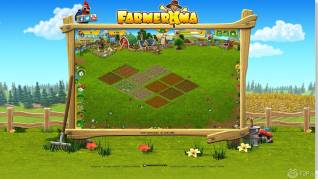 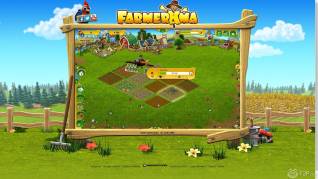 Balancing what we wanted to do with our crops was important, whilst we could use them for feed, we also needed to use them to fulfil orders as part of the continuing quests, a shopping list from a random NPC who would want a certain amount of items from us. We could also buy and sell resources we needed (or didn’t need) on the player’s farmers’ market, so the trading gave us a third option with what to do with our stock. Every time we harvested our crops or animals we gained more XP, which unlocked more options in the shop, which we’d purchase, place, harvest new stuff, get more XP, buy new stuff, place, harvest, etc., etc.

This is why we didn’t need to play the game for hours, it is essentially the same thing forever, the mechanics don’t ever really change from what we could tell, likewise the game is by construction a fairly casual game, one that you dip in and out of through the day periodically at max as the time it takes to grow crops and breed animals was a pretty long affair once you got out of the starter items. 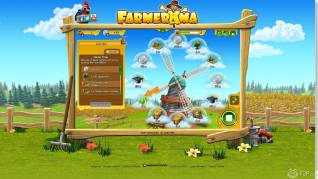 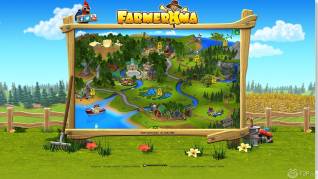 For once we can say we actually didn’t mind too much the repetitive nature, which is usually a big no no for games, but with Farmerama we can see why it makes the game so addictive for people, which is why it’s one of Bigpoint’s most popular titles. To get ahead you really do need to invest time, not at a constant pace but over days and weeks to build up your own little farm, which gives you access to new items that ultimately gives you more to do and requires and even bigger time investment. The thing we like is that really you’re only doing it for yourself, there’s no major competitive nature to the game, if anything it is designed to be more cooperative and encourages the community to support each other, with its Chickadee mentor system where new players can volunteer to get help from veterans, and mechanics in place where creating friends and helping them on their farm in turn helps build up your own.

Farmerama definitely isn’t our type of game, but for everything it is and the way it puts itself across we’d say it’s a good contender in the farm simulator genre, family friendly and simple enough to be played casually, hopping into your farm a couple of times a day. With it being a browser title we can definitely see the casual trend of the game being a little addictive for most, in the same way that Zynga’s Farmville turned a casual game into an obsession for many!