World of Tanks: The Good & The Bad

World of Tanks: The Good & The Bad

In World of Tanks players control their own WW2 tanks and armored vehicles in fast paced brutal battles with multiple game modes across a wide variety of maps covering different environmental battlefields. You can play in fun PVP matches, level up, unlock new tanks and modify them, the game brings a lot of features to the table, but not everything the game has to offer is great and the game still has a number of flaws, so let’s compare the Good & Bad of World of Tanks.

• Wide Variety of Vehicles – Ranging from light tanks to long range artillery, the game has over 400 vehicles to choose from as used by the primary nations that battled during World War 2; each has its own stats, benefits and cons to cover various playstyles

• Quality Graphics – Whilst a little bit older, the graphics still hold up well in the game and alongside the general battlemap design and the textures for vehicles, environments and effects, World of Tanks is an immersive experience

• External Mods – Ranging from voice packs, user interface tweaks, improved assets and generally some things the official devs haven’t got to yet, the game works with mods that the community has done a great job creating

• Arcade Gameplay – World of Tanks is fast and fun arcade action, with the needed MMO elements and customization options, the actual battles themselves are fun shooters with elements of strategy

• Steep Skill Curve – The mechanics are relatively easy to pick up and play, but it isn’t as easy to master and brings with it a steeper learning curve that requires skill to improve and reach the top

• The Clan Wars – Players can battle it out across a global map with their own clans, fighting for regions, influence and gold rewards; the system also has three different fronts lock to certain Tiers of tanks so anyone can contribute to the war effort

• Forcing Purchases – In order to climb the technology tree and unlock new tanks, players actually have to purchase and then upgrade the trees’ previous tanks, meaning that players are constantly being forced to waste their currency and buy tanks and their modules when they don’t even want them

• Limited Maps – There just aren’t enough maps in the game, whilst they are tweaked from time to time, new maps take a long time to come around and being on the same handful of maps all the time gets quite boring

• Tier Matchmaking – The matchmaking system is all over the place, with no skill based matchmaking, or tank Tier matchmaking, it means players in lower tier tanks can end up matched up against high tier tanks giving them little chance to actually win if the opposing players have any competence

• Too Few Game Modes – There’s only 3 game modes, locked to a handful of maps, that all revolve around capturing bases: both teams have to capture the enemy base, one team controls a base and must defend whilst the other attacks, or both teams fight to control a neutral base

• Gold Ammo – You are able to spend real cash on premium “Gold Ammo” which has high penetration stats and can destroy enemy tanks easy, it is the essence of pay to win (though still requires skill to hit) and makes those tanks that depend on their high Armor to be valid pretty redundant

• Spotting System – Tanks can hide in terrain to ambush enemies, when “spotted” tanks will appear on the map, however there’s plenty of “camouflage” skills and modules that essentially make tanks completely invisible, which we think is kind of ridiculous for a WW2 simulator 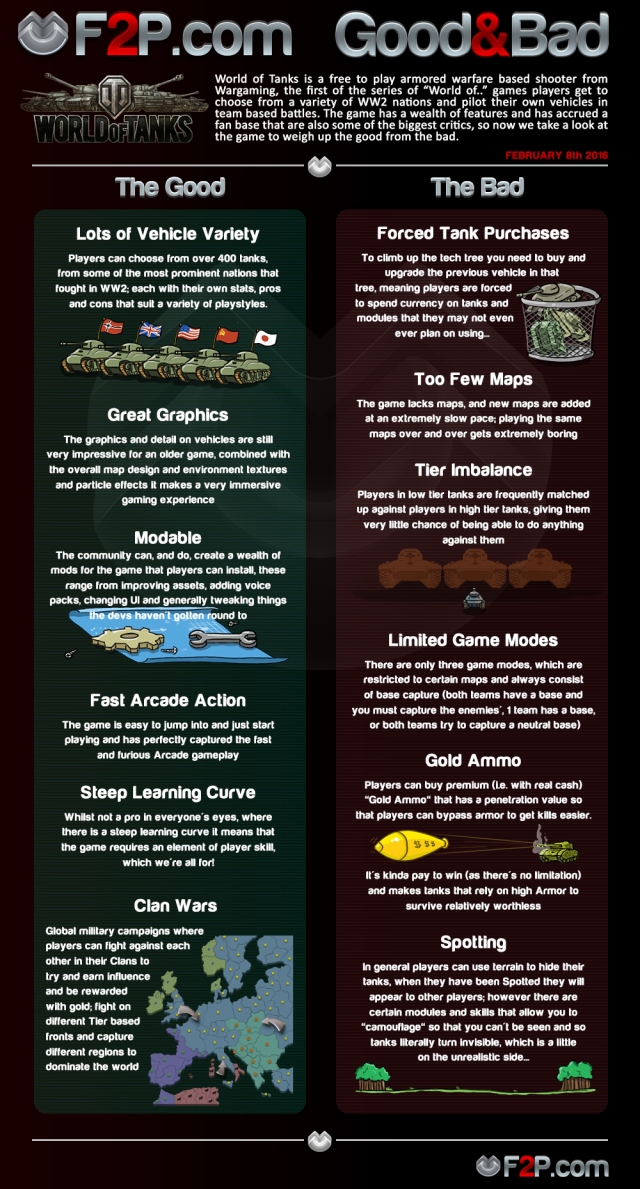