FEEL THE SUPERSONIC RUSH OF GAUSS, THE 41ST WARFRAME, IN THE SAINT OF ALTRA UPDATE COMING THIS WEEK ON PC

Take this Speedy Warframe for a Run, Explore the Expanded Disruption Mode, Exchange Looks and Mods With the New Chat Link Features, and More 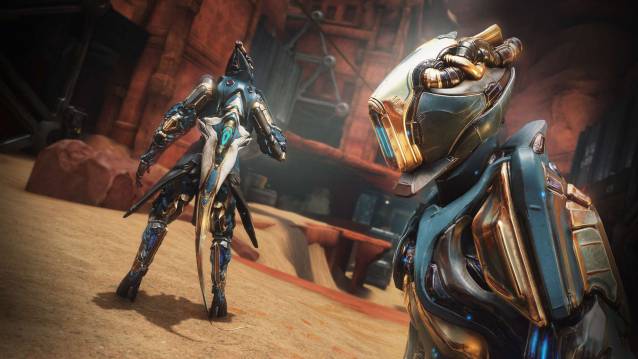 Canadian publisher and developer Digital Extremes is ready to unharness the blazing power and speed of its new WARFRAME's, Gauss, along with a cool collection of enticing updates for Warframe® players in the Saint of Altra update coming this week on PC. The fleet-footed Gauss blindsides the toughest of enemies by generating kinetic energy to wield an assortment of powerful moves and Abilities. The popular, endless Disruption Mode introduced in The Jovian Concord has expanded to new planets, mission types, and factions to truly challenge players across the Origin System. And Digital Extremes will soon grant players the chance to upscale an endless variety of fashion frames and Mods with the new 'Look Link' and 'Mod Link' chat features.

The 41st WARFRAME's offers a suite of Abilities using kinetic movement to build up his unique speed gauge to unleash a diverse arsenal of offensive and defensive Abilities. They include:

• MACH RUSH: Burst into a hyper-sprint to run across water, traverse across large areas faster, bowl over enemies and re-charge his Speed Gauge. Crashing into solid objects generates a powerful shockwave.

• KINETIC PLATING: Generate armor plating that converts a portion of absorbed Kinetic Damage into Energy. Also protects Gauss from being staggered or knocked down. Damage Resistance is relative to battery level.

• REDLINE: Push Gauss' battery beyond the redline, supercharging his Abilities and setting Fire Rate, Attack Speed, Reload Speed, and Holster Rate into overdrive. When past the redline, bolts of arcing electricity dance periodically from Gauss, exploding en masse when the ability is deactivated.

• PASSIVE: Never stop moving. Keeping Gauss in motion generates an electrical current that charges his Speed Gauge, helping Shields recharge up to 80% faster, and decreasing recharge delay up to 80%.

Gauss can be constructed from parts acquired free in-game, purchased in the Marketplace, standalone or as part of a bundle -- which includes the explosive new Missile Launcher, Grenade Pistol and more. Check Warframe.com for more detailed information.

Raising the Stakes With the Expanded Disruption Mode

As a result of the corrupt Alad V's sale of black market technology across the Origin System, the popular Disruption Mode has spread across the Origin system. The stakes have been raised in the expanded mode newly outfitted with some of the toughest enemies and coolest rewards! More Disruption nodes are appearing in unexpected places, including the Corpus Outpost, Grineer Galleon, Grineer Settlement, Grineer Kuva Fortress, and Orokin Moon. Here are the planets:

An assortment of new features, skins and collectibles have been added to round-off the update and to entice the fashion frame artist, reward the collector, and sooth the musician inside all of us.

• With the new Look Link and Mod Link chat features, players can generate a link to their chosen Warframe design or Mod Loadout and post it to share in chat, or import a shared design and loadout from a fellow Tenno with a simple click -- radically simplifying and speeding up the ability to expand one's Warframe "wardrobe."

• Available for purchase in the Marketplace, the Harrow Deluxe Collection features a new Deluxe Skin, a matching Armor Set and Weapon Deluxe Skin for Spearguns.

• Purchase the musically enticing Shawzin Hero Emote and become the Origin's Systems most renowned bard. The guitar-like Shawzin instrument (available in the Marketplace) offers Tenno the chance to serenade fellow players with any song they have the skill and creativity to perform. Let it roll, Tenno!

• Infested Dojo Decoration Set: Decorate your clan Dojo with an aesthetic inspired by the Infection faction.

• Riven Slot Increase: Expand your arsenal of Riven Mods -- players can now increase their collection of Riven Mods from 90 to 120.

Download Warframe's new update this week on PC. Look for the console versions to within the month! WARFRAME's