Warframe: The Good & The Bad

Warframe: The Good & The Bad

In Warframe players take on the role of Tenno, ancient warriors of blade and gun that had mastered the Warframe armor; in stasis until the galaxy needed them they now return as the Grineer seek to control the solar system. A fast paced action combat RPG, players can battle it out in PVE and PVP content on their own or with friends and allies

Space Ninjas - You get to play as Ninjas... in space... we don't need to say anything more, but for the sake of the article we will, but that should be enough

30 Playable Warframes - The game boasts a huge number of playable Warframes, each playing as an independent class with its own unique abilities, as well as 14 of them having an upgraded Prime version

Exciting PVE and PVP - Players can concentrate on solo and co-op PVE missions battling through story driven content and dynamic quests to acquire XP and gear, or face off against other players in PVP arena battles

Acrobatic Combat - Whether running up and along walls, dashing through the air, using laser whips to lasso across the terrain, or even fly in space using Archwings, the game offers mobile and fast paced combat

Randomly Generated Maps - In PVE missions the areas that players will be sent to for their missions are randomly generated using pre-made room/hall, corridor "tiles", creating a unique location every time for maximum replay

Weapon Customization - There is an extremely high level of weapon and gear modification available; each weapon can be independently levelled up from use allowing you to add further mods to improve damage, passive abilities, aiming, and more

Spectres of the Rail - The most recent update was so astronomically bad, buggy and downright broken in near every imaginable way that the ensuing public outcry forced the Game Director to issue a public apology and admit they put the game out way too early...

Low Skill Ceiling - Whilst the shooter aspect does require skill, with no baseline auto-targeting, in general the combat is fairly easy and the PVE RPG aspect lacks the type of challenge that team orientated MMORPGs provide, such as dungeon and raid bosses

Solo Co-op - The game provides the ability to group up in a "cell" of 4 players to complete PVE content, but there's rarely any communication and it just feels like solo mode with 3 NPCs trying to grind missions

"Random" Maps - Whilst in theory the randomly generated maps are great for keeping content fresh, after not too long the maps, whilst different, do start to be all too similar and the rooms/ areas no longer feel quite so unique once you've done them a dozen times

Farming Grind - After a while the tedious nature of playing the same type of content solely to farm loot crates, gear and materials becomes soul crushing

Open “Beta” - The game is still announced as being in open beta, which it has been in for over three years. Now the term just looks like critic armor for any time something negative is said about the game that the developers can say "it's still in beta". It's not. 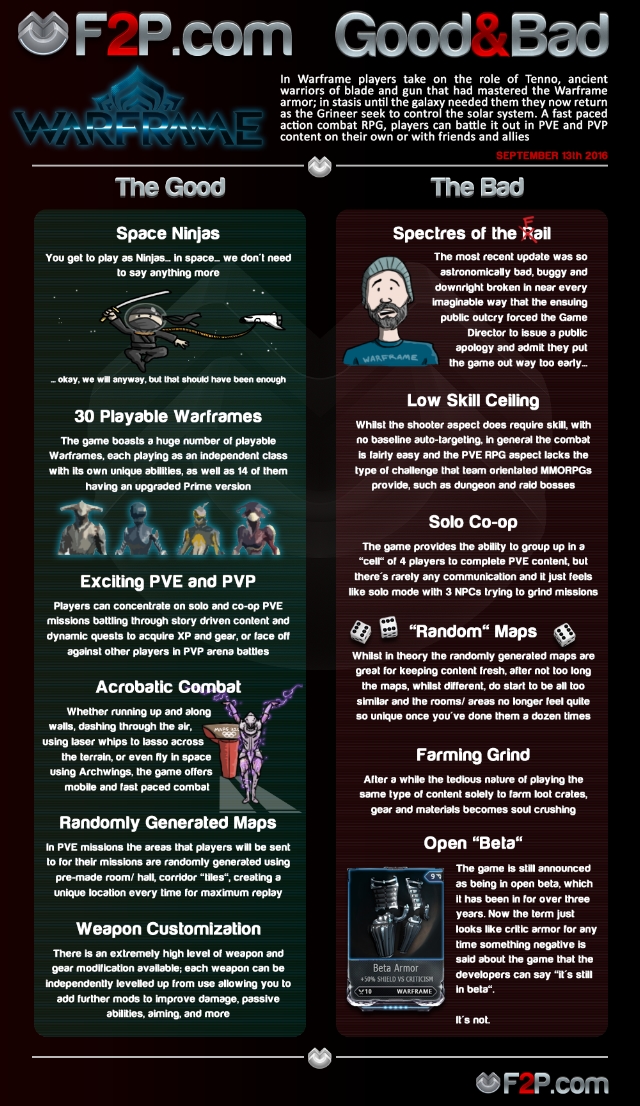