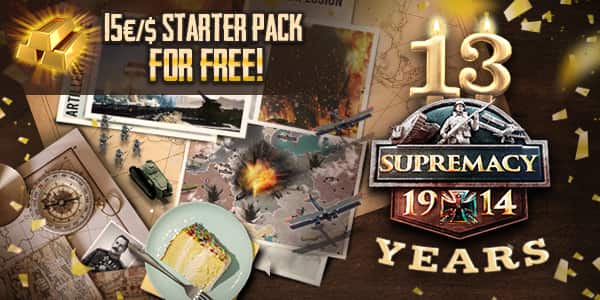 Bytro Labs GmbH publisher of Supremacy 1914 - The Great War collaboration with F2P.com, to bring you this starter pack value 15€/15$ for new users, win two Month Premium account plus 20.000 Goldmark for FREE, valid until June 5th to celebrate the 13th Anniversary for this cross-platfomr Free to Play MMORTS game.

Step 2. Head to Supremacy 1914 for PC, For iOS Supremacy 1914 iOS and for Android users go to Supremacy 1914 Android in order to signup.To redeem your 15 euro / 15$ starter pack, create an account and pass the tutorial. Once you do, you will have two months of premium account + 20.000 Goldmark on your profile. Play for FREE Supremacy 1914 here on F2P.com

Supremacy 1914 is a player real-time strategy cross-platform MMORTS game (play Supramcy1914 on PC, Android and iOS) created and published by German studio Bytro Labs, in which the player manages one of the countries in the world during World War I, is a cross-platform MMO game. Take over the control of one of the mighty nations during the times of World War 1 in this long-term strategy game. Conquer provinces, forge alliances and build up your economy in real-time on persistent maps. Build experimental weapons of World War 1 and become the one true superpower!