Star Conflict: The Good & The Bad

Star Conflict: The Good & The Bad

Star Conflict is a space shooter MMO in which players battle out as a pilot of their very own spaceship, fighting across various locations, completing missions and utilizing various ships and upgrades. Let’s weigh up the Good & Bad and see what’s fully on offer...

Stunning Visuals - With detailed ship models, detailed textures, impressive effects and extravagant environments, the game is fantastic to fly around and when combat does break out it provides an extremely cinematic experience

Extensive Customization - As players level up they gain access to various techs and modules to customize their unlocked ships, the higher players climb the more options they get to really focus their strategy and playstyle

Sector Conquest - The active galaxy is divided up into dozens of sectors that player Corporations (clans) can battle over in a three way faction war; taking and controlling sectors to gain benefits

Extreme Grind - The number of games players need to play in order to acquire parts for constructing high tier ships is insanely high and results in hundreds of hours of gameplay, removing any real chance of more casual players acquiring them (unless they pay real world cash)

Poor PVP Matchmaking - The wait times between matches are pretty long, then they either get filled with higher ranked players who dominate, or terrible AI bots that just don't seem to react but are needed to fill empty slots

Unbalanced Ship Implementation - Initially it was the implementation of Destroyers that were a heavy grind to acquire, or required a lot of cash, more recently it is the Alien ships that really dominate battles way too much...

Heavy Nerfs - ... then when players have spent a ridiculous amount of time and real cash to get these ships, these ships get nerfed into the ground to seemingly pave the way for the next imbalanced ships

Tier Jumps - The jump from one tier of ship to the next is very difficult, players level up a ship by acquiring Synergy (XP) through dealing damage, capturing objectives, etc, which is extremely hard to do when first starting a new tier and you are particularly weaker than all the other higher Synergy ships in that tier

So that's our Good & Bad for Star Conflict, let us know what you agree with and disagree with in the comments below! 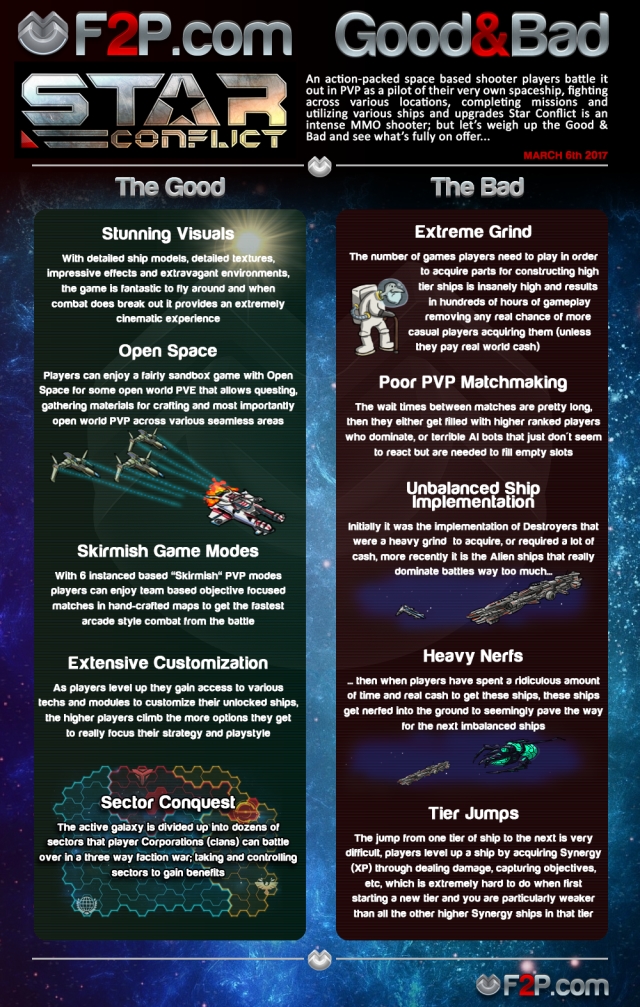