Seafight: The Good & The Bad

Seafight: The Good & The Bad

Seafight is a free to play browser MMO where players can build up their own pirate ship and lay claim to the seven seas. An older game still on the market, players can battle against each other to claim notoriety and plunder riches from each other. Let’s take a look at the game and find out the best and worst of one of developer Bigpoint’s oldest MMOs...

Customization Options - Whilst there are some initial heavy level and cost restrictions when players first start out, there are plenty of ways to customize your own ship choosing from your different ship's castle construction, items and ammo to define your play style

Switch to Client Based MMO - As Adobe have announced they will end support of Flash in 2020 the Bigpoint team have taken steps to ensure Seafight's continuation by creating a new client based game, showing they care about the game and the users that still play

PVP Focus -As you would expect from a game themed around pirates and battles on the ocean waves, Seafight focuses primarily on PVP content with players fighting for control of the seas in one on one duels or in huge guild battles with armadas of ships and boarding parties

Retro Graphics - As Seafight's graphics were pretty good when initially released, they now offer a retro look that does still hold its charm as opposed to simply looking dated as many older games do

No Interesting PVE Content - Without PVP the game really has nothing to offer as the PVE content is the most boring point and click mechanics ever; literally clicking an enemy and then letting it auto attack over and over until it's dead

Completely Pay to Win - Whilst it would be expensive it's not unfeasible for players to purchase the best ships and fully kit them out by spending cash on premium Pearls currency; realistically to be competitive in PVP as the game has been out for so long players have to pay to catch up

Levels of the Same Grind - Whilst there are multiple levels and areas to explore across the ocean, there is very little that separates one zone from the next and the journey to max level is a grind likely to bring on sea sickness

Limited Quests - The quests themselves are pretty dull, getting players to sail back and forth across the ocean and only being able to have one quest active at a time; they are at least a good source for rewards and XP, unfortunately there's generally not enough of them so you are forced to grind kills on AI for hours to level

Dead Low Level Areas - Unsurprisingly as the game is so old, but with few consistent new signups to the game the low level areas are dead and where once the chat was littered with conversation and a much bigger social element to the game to keep people occupied between the XP grind; now it's just a silent solo experience 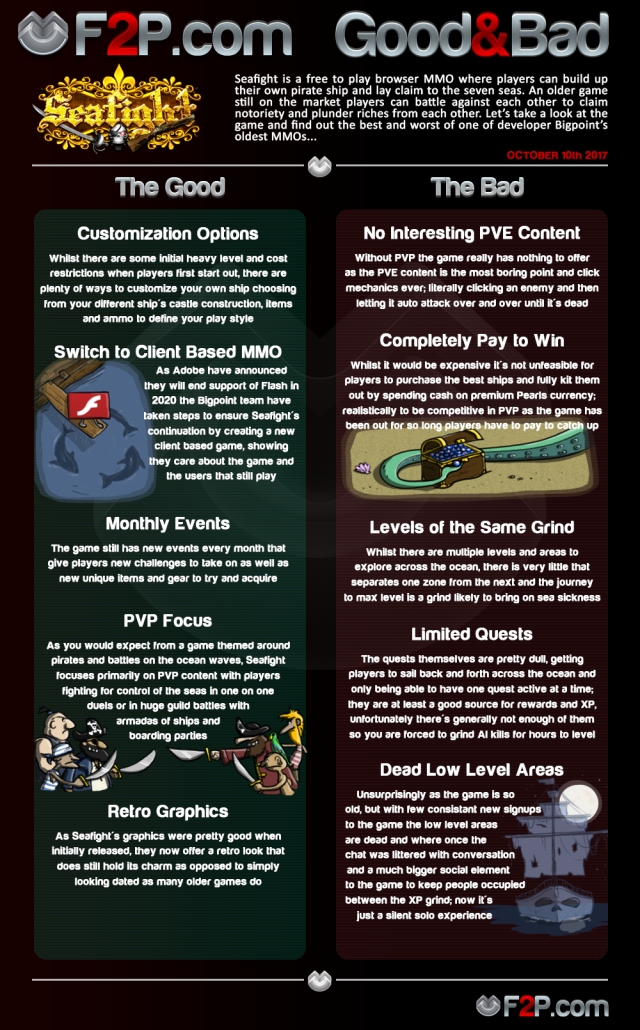