Pirates Tides of Fortune: The Good & The Bad

Pirates Tides of Fortune: The Good & The Bad

Pirates: Tides of Fortune is a browser-based free to play MMO where players build up their own settlement and engage other players in PVP. With its pirate theme, players can build up their fleets of pirate crews and battle across the seven seas, but is the game a real treasure, or a shipwreck? Check out our best and worst elements of the game to find out more!

Free to Play - Love or hate the game, at least you don't have to pay for the experience and players can jump into it with a few clicks and begin playing; whilst paying for premium Rubies is an option (though later in the game it can become a bit more of a necessity) there are at least a few ways to earn Rubies in-game

Pirates! ARRRR! - There's possibly nothing quite as cool as pirates, and so being able to build up your own stronghold and pirate fleet as you dominate the Seven Seas sounds like a good start to us!

Dozens of "Discoveries" - Discoveries are the game’s version of technologies and there’s a huge tree of them to work your way through and build up your pirate Haven as you see it and as best suits your play style; Players get new stuff to play with periodically.

PVP Focused Gameplay - Primarily the game focuses on providing an intense PVP experience where players are constantly attacking or being attacked by other players; these attacks can come at any time so players must constantly be monitoring their pirate strongholds and managing their own attacks

Friends with Benefits - Inviting players to join the game can net some pretty good benefits for your own Haven, providing they stick with the game and get up to level 15. Having a larger network of friends playing the game can also be a good starting place for forming your own Brotherhood (clan)

The Plarium Formula - Though one of the developer's earlier games, it is the constant use of their "formula" to keep publishing the same game with the same features but a different theme that now means the older games are made redundant by the newer ones

Early Game Cycle - Players spend a tedious amount of time building up their pirate hideaway, constructing and upgrading their buildings and completing "quests" (using the term loosely) to keep bringing in resources; for such an exciting theme the developers did a good job of making the early-game boring and un-piratey

"Retro" Graphics - One man's retro is another mans dated, and the graphics for the game do not hold up well against newer titles; rough around the edges, pixelated in places, it tells a tale of a game that once looked good but hasn't held up against time

Premium Power Purchases - The game allows the purchase of premium currency using cash, which in turn can be used to buy pretty much anything in the game from combat units, boosts, resources, shields, and every other advantage you can think of which makes the game very skewed towards pay to win

No Mobile Gameplay - The game doesn't have its own app and is marketed as a browser title, which in itself isn't necessarily a bad thing with plenty of games being browser only. However, as the developers have published a handful of games that are exactly the same as Pirates: Tides of Fortune, but have mobile app access, then it its more worthwhile to play one of their other titles for the convenience 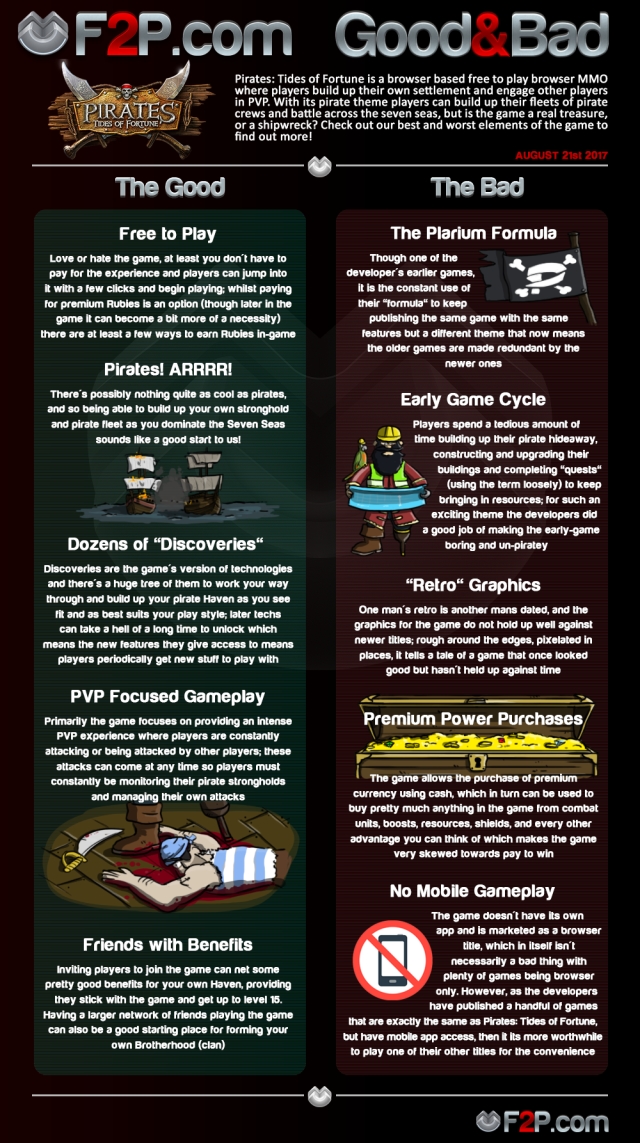