Path of Exile: The Good & The Bad

Path of Exile: The Good & The Bad

Path of Exile is a free to play action RPG where players find themselves abandoned on the grey shores of grim dark continent of Wraeclast, a cursed penal colony filled with horrors that you must now survive. The game focuses on combat focused gameplay and story driven elements, players will improve their character, acquire gear and gems and work together to overcome some of the game’s greatest challenges; but let’s separate the good from the bad!

The Skill Tree – The Skill tree is a huge open network of skill nodes and players can navigate them however they like; your class defining which point on the web you start, so there are thousands of possible builds to create

Actually F2P - Unlike many free to play MMOs Path of Exile does a really good job of staying free without having anything pay to win
Skill Gem System - Gems have different powers such as casting fire, attacking multiple targets, increased damage, etc. and you can link them together in different items to make hundreds of different combos for unique spells and attacks

Leagues - Unique servers with their own rules, each player can only have one character, some leagues even have Hardcore mode activated where if your character dies then they are removed from the League (and put into one of the normal Leagues)

Barter Based Trading - The game has no real staple currency, instead players will have to trade with each other in a supply and demand basis, trading items between each other and negotiating

The Diablo 3 We Wanted - Whilst Diablo 3 has made great strides to improve it's early content, Path of Exile was and still retains the title of the Diablo 2 spiritual successor with its classic ARPG gameplay and for many was the game that D3 should have been

Offline Accessibility - The game has some interesting concepts such as no market/auction so all trade happens in person or no recipes to know what resources you need for crafting. Unfortunately the accessibility to recipes through wikis and the prolific/necessary use of external message boards to trade makes these systems redundant and at times frustrating

Map Grinding - Endgame content pretty much focuses on grinding maps; items that let players fight in instanced dungeon areas for endgame loot. As this is the only real endgame content it all becomes a bit tedious to grind and complete them

Disconnects & Desyncs - The game has, since launch, suffered greatly with a variety of performance issues including random disconnects. Worst of all are desyncs where the player is out of sync with the server (which feels like lag), and really hurts ranged fighters

Action over Story - Whilst the setting is extremely fun and gritty, the general story-arcs aren't the most compelling (with the odd exception) and falls far from the RPG experience we like, with massive emphasis on the Action Combat and hack n' slash

The Lord's Labyrinth - A randomly generated endgame map whose layout changes each day, it has extremely deadly traps and bosses, and is how players unlock their Ascension Class. However, whilst an intriguing new addition in theory, the final product misses the mark in many ways; it's too long, inconsistently difficult, and generally just boring to complete over and over.... 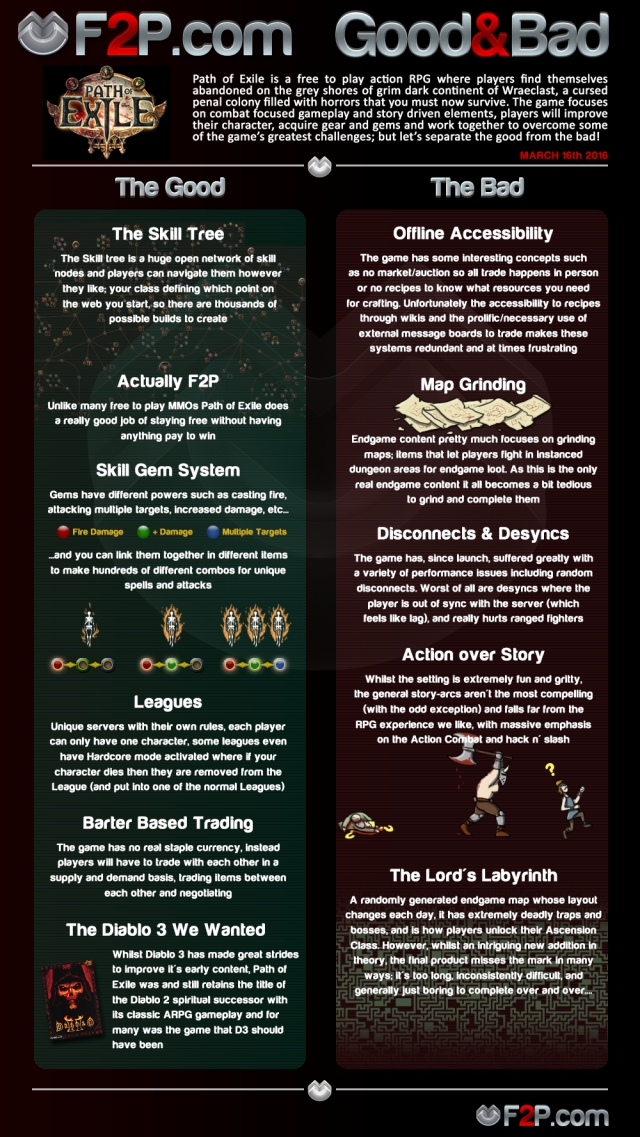