First Impressions on Path of Exile

Combat can be the same thing over and over, gender locked characters

First Impressions on Path of Exile

Recently we put a few hours aside to check out Path of Exile from Grinding Gear Games, a free to play dark-fantasy Action RPG where we stepped into the unfortunate role of a prisoner exiled from the main continent onto the continent of Wraeclast. Thrown from a prisoner ship we wash up on a beach and instantly have to fight to save ourselves in this horrific setting filled with enemies, survivors, creatures and other exiles.

On the prisoner ship we were able to choose our class from a handful of prisoners, some pre-generated characters with their own backstories; generally we're not a fan of not being able to create your own character and choose a gender, but being well aware how the likes of Diablo and Marvel Heroes shape the story around specific characters and give them their own class/character story-arc specific to the character then we're a little more lenient in our expectation. Out of all the back stories of our prospective character's crimes and their justification for why they did it, we went with "The Witch" who up front talked about controlling the dead... sounded cool. 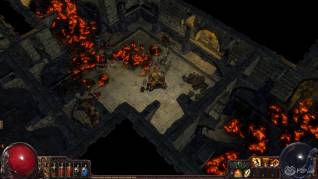 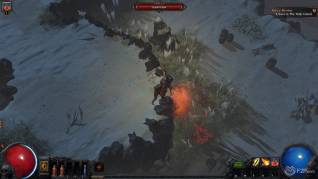 Cue our unfortunate landing on the beach and trying to have a chat with the only other survivor from our ship he was suddenly cut short by some "Drowned" monsters; those dead from the ship that had come back to life as zombies. A couple of zaps from our natural magic and the undead were on their butts and dropped some loot for us to grab. Loot takes up certain shapes in your inventory, broken up into squares, larger items can be a 3x2 chest armor, or a 1x3 wand or sword; the larger and bulkier the item the more room it takes up. Further into the game the amount of gear that drops on the floor made it quickly apparent that we weren't looting everything (not without constantly going back and forth to the quest/town area to sell stuff) and so our looting became a lot more choice and targeting only stuff we needed or "blue" coloured gear that would sell for more currency.

The currency feature is quite novel; there's no coins or gold on Wraeclast and instead characters trade in items such as Scrolls of Wisdom (one of the lowest tradable commodities), or pieces of them that when you gather enough will create a single scroll. These scrolls, however, are also used for identifying the properties on newly found magic items (which practically everything is) giving us a decision on whether to ID something to find out if it's useful or more powerful than we thought, or using scrolls to buy needed items from the town vendors. It's a neat little system and the trading expands to players as well who will trade what they want for what they have, typically exchanging items, weapons, armor and gems.

Gems are a big part of the game and every piece of armor or weapon comes with various gem sockets coloured green (Dex), blue (Int) and red (Str) where you can place a coloured gem in the same corresponding socket, each colour represents the different classifications and types of ability you will unlock such as Blue/Int based gems focusing on magic abilities whereas Red/Str based gems more about physical attacks. We acquired our first Fireball gem early on, which instantly gave us another attack on our hotkey bar, showing the level of spell/ability customization, after killing off a huge zombie and heading into town we were also rewarded a choice of gems and it was here we took a necromancy gem that gave us the ability to summon three zombie minions from fallen corpses. 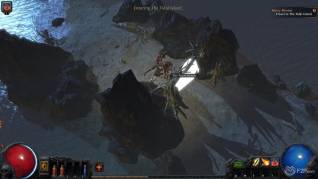 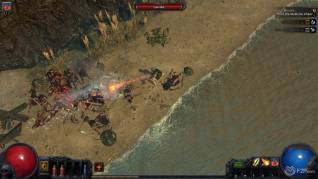 It's only looking back now that we realise how key the decision to pick up the zombie gem was as summoning three minions, that could take quite a bit of damage, long enough to kill at least one enemy and respawn another zombie if one fell. They acted as our tanks as we then focused on attacking at range, any time a single enemy might target us it was generally okay and we could take them on our own; but with the amount of enemies that zerg you at any one time it makes us wonder how difficult the combat would be. For the most part it was very click-fest hack n' slash with us taking on half a dozen enemies or more at any one time, journeying across the instanced area for our quest it held that same Diablo style gameplay where we unlocked portions of the map as we visited them and then when checking the map if we noticed a blank spot that we'd not visited then we'd have a compulsion to travel all the way back across the map just in case there was something cool there!

In general the enemies weren't too tough in the earlier levels, and with mana and health pots that constantly refreshed themselves as we killed monsters we typically had enough to keep us in the action (in fairness we never really needed to use them). The boss enemies, highlighted with a yellow/gold colour and an elaborately framed nameplate, actually give us a lot more trouble and forced us to chug potions as they unleashed some pretty brutal attacks; the first boss (after a lumbering huge zombie) rained down an AoE of fire and the damage was so unexpected that we quickly bit the dust; after that we played with a lot more caution when fighting the bosses and it was good to see that there was a challenge even in early gameplay. The combat itself does get a little repetitive, and at times it would be easy to say grindy, with most enemies this early on being relatively the same and focusing mostly on melee attacks (though we're sure this changes dramatically as the skill/gear curve of players increases and they head into higher level areas). It is the nature of ARPGs for the most part and so you need to enjoy these types of games and that type of combat, whilst it can be a little samey early on it is surprisingly involved and not paying attention can quickly find you face down in the dirt.

We cut out way through a handful of areas, levelled up a few times which gave us access to the Passive Skill Tree where we could spend skill points to unlock skill nodes on an absolutely huge web of skill; hundreds available, that were accessible by every class. The key thing with class selection, other than starting skill and stats, is that you start on the Passive Skill Tree at a different location and have immediate access to a different range of skills, however, as we levelled up we could choose to spend points taking us more towards the Marauder starting class and start gaining access to his skills if we wished to make ourselves a tanky spell caster hybrid. The amount of customization available, from the gear we wore (practically anything is wearable, with certain items having stat requirements) to the socket colours and layout on them, the gems we unlocked and levelled up, the way we spent our skill points; it seemed endless and more power to the developers for giving this amount of individuality to players builds.

The whole atmosphere of the game is extremely well done, from the creepy tones and backstories of the class characters and NPCs, the snippets of lore on Wraeclast and its denizens (which is extensive but always keeps an air of mystery), the shadowy environments which for an older game still look extremely impressive, to the desperation of a lack of civilization that even stretches out to the commerce system and no coin currency. The developers have truly captured the grim hopelessness that Wraeclast is and exploring it in more depth is an exciting prospect. 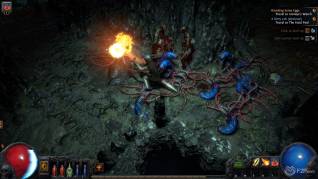 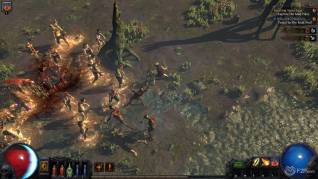 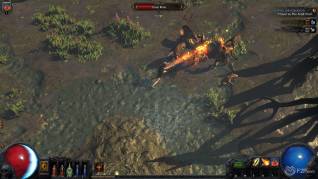 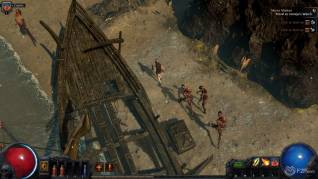