We got the chance to have a one on one meeting with Chris Wilson, Producer and Developer at Grinding Gear Games, for a presentation of “Atlas of Worlds”, the fifth expansion for Path of Exile. Leading the presentation it was explained by Chris that more and more of the game’s players are getting to end game and spending most of their time there, finishing the story of Path of Exile and playing the random areas, with 95% of the playtime in the game being post-storyline. Due to this the main focus for this expansion is to improve this area of the game (whilst still offering a few extra things for new players as you’ll read) and ensuring that the time spent is much more rewarding.

For anyone unfamiliar with the end-game content of Path of Exile the game utilizes a system called Maps; lootable, craftable and tradeable single use items that when used can transport players to a personal, randomly generated area (including environment, items and mobs), with the difficulty being set by the tier of the map (up to Tier 15). Players can upgrade their maps and craft them to be more difficult, in turn giving them better rewards, essentially players craft the difficulty of the content that they want. The maps come in different environments and each map for an area will have a specific map boss, the bosses are generally more beefed up versions of other mobs, but with some unique traits and combat mechanics such as cloning themselves, splitting into two different types of monsters and generally making players think differently about combat and how to defeat them strategically. 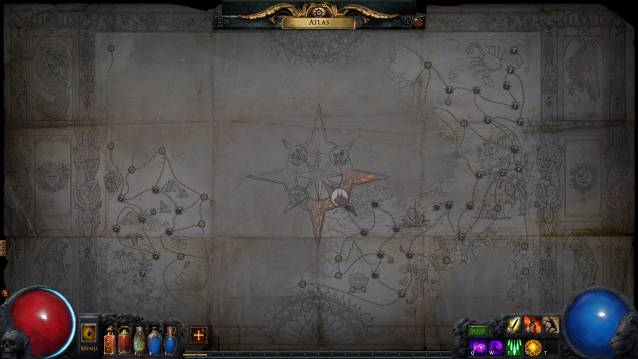 Whilst the fundamental goal of maps is self-driven, in that players complete them to get better gear, get stronger and in turn be able to attempt higher tier maps, there aren’t any actual story-driven goals and the maps themselves are just a rather detached feature. This expansion is here to add story, purpose and new systems without altering too much this core mechanic that players do enjoy. Enter the “Atlas of Worlds”.

The Atlas of Worlds is now an overarching map that illustrates how all the different maps in the game are linked together, instead of them just being random cool areas to fight in they now have a bit more story purpose. The actual Atlas has a fog of war over it until players play maps that reveal these areas, thankfully we got a view of the whole uncovered Atlas revealing the 100 available maps; taking into account there are only 70 maps currently in the game this means the expansion is bringing 30 new maps to players as well as upgrading some of their old maps to improve the quality. We saw some pretty interesting maps including a hybrid indoor-outdoor map (where previously maps were one or the other), an underground spider temple with giant spiders climbing up the walls, a battle where you are fighting outside a city wall and then transitioning later up onto the ramparts themselves, alongside all of this are nineteen new boss fights, each with their own unique mechanics. 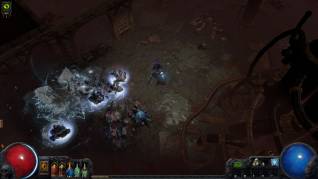 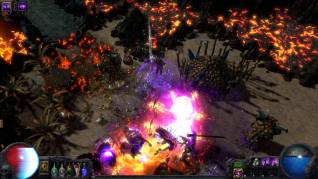 Players can battle their way around the Atlas, each map connected to certain others (kinda like their skill tree), making your way from map to map can lead you to the center of the Atlas where players can try to fight four Guardians, defeating each Guardian gives you a portion of a key and with all four pieces you get to fight the Shaper, the big bad who is responsible for making all these maps. Players can make their way to the center from different locations, fighting through different regions and environment types, or they can just circle around the entire Atlas; ultimately there are multiple routes to get to where you want to go.

So is the game just a rush to the middle and bypassing content? Well, kind of, depending on what you want to do. If you want to drop the Shaper then you can acquire the four key portions, you can even trade them with people who might have access to one side of the map and have defeated the Phoenix Guardian there a few times. However, the developers have now put in place at least 10 new base items that have some pretty impressive pre-crafting stats, such as the Bone Helmet which, whilst low in armor, allows Minion to deal 31% increased damage (ideal for Necromancers). Unlike other items these uniques/legendaries can only be found in a specific region, a cluster of maps that players will have to go and hunt through if they want to get these cool new gear items. These first ten are only the beginning, adding new items and having them bound to certain locations is the first step and now gives players more of an incentive to play over the maps outside of the “top tier” favourites. 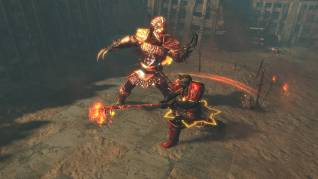 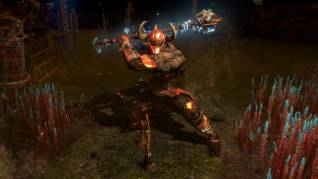 Other map crafting items we’ve seen that should keep players happy are the Shaper’s Orb, acquired as rewards for progressing through the Atlas, which allows you to upgrade one of your Atlas maps by 5 levels. Second to this is the Cartographer’s Sextant, which will add a random mod to an area on the Atlas by selecting a map, marking a circle and affecting all maps that fall in that catchment. The mods from the Sextant can be positive, negative or neutral, everything from doubling your own Critical Strike Chance (positive), doubling Monsters Critical Strike Chance (negative) or both at the same time (neutral), combined with the fact that Sextants can be used on different maps and cross over onto the same catchment area effectively stacking mods, which means players have to work out how to overcome or take advantage of these.

So that’s the core Atlas of Worlds content for the expansion, highly focusing on end-game content, however we were shown a little something for the rest of the player base with a new League. Generally with each expansion a new League is launched, typically lasting three months, where people can start with fresh characters and compete with each other to gain rank, each league has different rules and mechanics associated to it; introducing the Essence Challenge League. 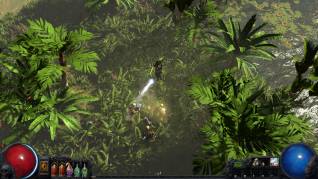 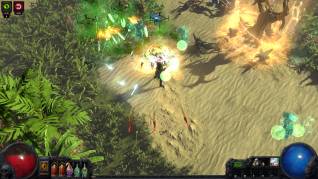 When playing through a map players will find frozen creatures trapped in an Essence, depending on which essence has them trapped players will encounter a different fight (and in turn be rewarded with that essence which can be used in crafting), and there are 105 different essences within 25 categories. One of the features of these essences allow players to get a random item that will be equipped with a guaranteed property, such as Maximum Health (a pretty popular property), as well as this there are new properties that have never before been seen such as “Fire Burst”, with lots of the mods potentially completely changing how players build their characters and their passive skill templates. Furthermore there are 7 tiers of an essence, players can combine three of the same tier essence to try and create a higher tier. Similar to the Cartographer’s Sextant players can use a new Remnant of Corruption item that can change the essence, these can be super positive which benefits the player (yet still increases the difficulty of the battle) or negative that destroys the essence and makes the battle even more difficult.

Clearly there’s a lot that is going to be added to the game, the story and progression mechanics still have the same feel of the core features, but they have been upgraded and tied better to the game with a little more purpose. There’s so much content for old players, which in turn makes a near unprecedented amount for new players, we loved everything we saw from the presentation and the randomness of both good and bad effects that can be inflicted on your gameplay (which I’m sure possibly frustrating at times) definitely extends the shelf-life of the content for the better. Combined with a new performance overhaul players on lower end systems should now have every opportunity to play the game just like everyone else! Overall a very positive step for Path of Exile and we look forward to hearing what you all think about it from the 2nd September when Atlas of Worlds goes live! 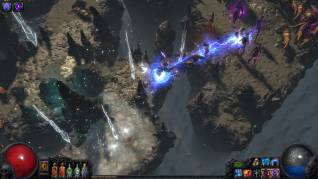 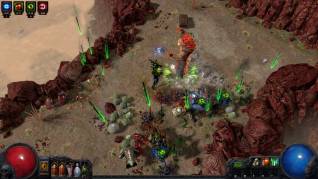