This week we got to jump into the closed beta of fast action first person shooter Quake Champions, developed by ID Software who released the original Quake game in 1996 (successor to their popular DOOM series) the developers have tried to once again capture that all too familiar high-speed intense gameplay with their newest FPS. Putting a few hours into the game to get a feel of the new player experience and beyond we begin this article by saying that, in general, FPS games are no longer our particular forte and, as someone who remembers avidly playing the original DOOM and Quake games, we’re now longer as quick off the draw or have the fast twitch skills as some of our gaming peers. This is very important information going into Quake Champions.

Loading up the game took about 5 minutes of a loading screen, not the best start and did prompt us to head to the forums only to find that a lot of people had already queried it and the main responses were “just wait” as it does appear like it’s just hanging and crashed; so performance wise a bit of a shaky start. The game isn’t huge, it doesn’t have a magnitude of maps, modes or playable Champions; however it does have an unlocked framerate and runs at 120hz, as well as having some pretty high graphical settings, all of which contributed to the load time. The graphics themselves look pretty great, and that was even with us being forced to play them on Medium settings; much like me it would appear that my gaming rig is starting to slip behind the curve and isn’t quite keeping up to speed with the younger generation! 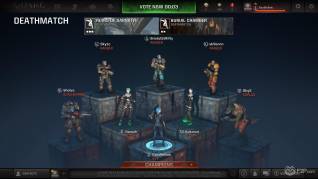 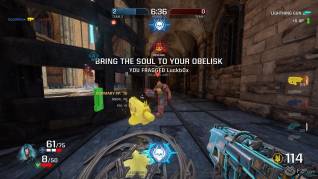 Starting out our only available character was “Ranger”, some lost soldier from another dimension who is in fact the main character from the Quake series (and was the original “DOOM Guy” marine character). The other eight available characters are locked and can be purchased for 5000 favor points which gives access to the character for 24 hours the moment they are purchased; 5000 favor isn’t exactly a lot and is earned through playing the game and winning matches; we started with 10,000 favor to try out other characters already and after a few hours we’d already earned a couple of thousand more. Players do have the option of paying cash for the Champion’s Pack, which gives full access to the roster of Champions and meaning players can spend their earned favor solely on the Backpack loot bags that have all types of aesthetics for the characters.

Before we started spending our favor we tried a few games out first, currently there are three to play with the standard Deathmatch and Team Deathmatch, a 1v1 duel where you choose three Champions for the battle and have to defeat your opponent with them. The new mode that has been added is called Sacrifice and is a combination of capture flag trying to pick up a “Soul” that spawns, then bringing it to one of two obelisks and defending it for a period of time whilst the enemy tries to retake it. There are two blank slots for future modes, as the game is still under development.

The four modes are played upon the current three available maps, each map itself is pretty huge, has a number of unique areas, and they are vastly different from each other with a huge Cathedral like building, a sunken Aztec style temple and an underground tomb filled with lava. Dotted across the maps are spawn locations for various weapons such as the power shotgun, lightning gun, rocket launcher and railgun, as well as different powerups such as health and armor, and the infamous “Quad Damage” multiplier powerup. To start with it is pretty difficult to remember where everything is, the maps were so large and you’re running around them at such speed, leaping around on jump pads or running through teleporters, that it was quite hard to remember where all bar a few powerups and weapons were. Combined with this that there’s no tutorial area for learning a map, learning the mechanics, where the powerful stuff actually is, everything is learning in a live battle against other players including how to use your Champions special abilities. 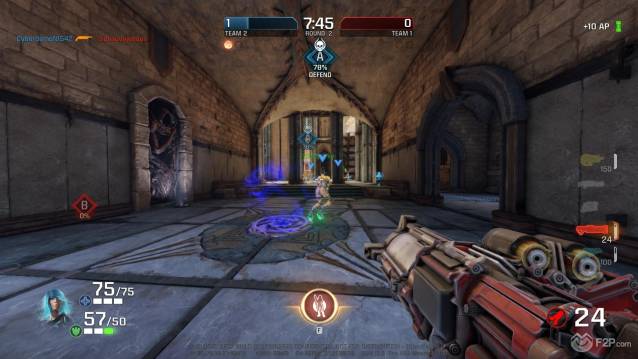 This is something new to the Quake games where each character has a single unique skill, in the case of Ranger he can throw out some orb that keeps traveling at speed until it hits a surface where it will explode, a useful but fairly inaccurate weapon, however it has the added utility of allow players to teleport at any point whilst the orb is traveling making it a great tool for reaching upper levels, gap closing on distant enemies, or simply confusing your enemies. We also tried out Nyx, by spending some cash, and her ability allowed her to enter a different dimension and turn invisible for a period of time and take no damage; when the timer expired after about four seconds you returned to your dimension. This was a great escape tool and an interesting way to get the drop on someone, but it’s main feature was that once your reappeared if you were in the same space as an enemy player then they were instantly killed. It sounds awesome, but it was practically impossible to pull off simply because no one stands still and they move ridiculously quick… the result was always triggering the ability, trying to get a kill, then finding us next to an enemy who had a hell of a lot more health than Nyx does. Until the game has some game modes or elements that promote static players; such as some amazing snipe points (most people run and snipe instead of camping) or an objective where you have to stay around a very small location, then this ability felt useless.

The speed of the game was one of the things we struggled with the most; as none of the heroes have any auto-locking or large AOE attacks outside of the rocket launcher (which anyone can use) then you are relying on twitch based skills where you can aim and pull of headshots like a pro whilst jumping through the air and everyone zipping around you like some blue hedgehog off his face on gold rings. If you don’t have fast reactions then Quake Champions just is not the game for you, regardless of the hero you choose there are none that can be used as a crutch (unlike Blizzard’s Overwatch where some heroes require a lot less pinpoint accuracy to play).

Playing for a few hours and learning the map definitely helps, knowing where health packs and the best weapons are gives you an edge, but with only three maps it doesn’t take that long for everyone else to know where they are either and so the game constantly falls to a skill matchup; for better or worse. The high skill requirement is going to put off a lot of casual FPS players, the currently low-map pool and choice of Champions that in all honesty don’t feel that different from each other (the single ability each one has doesn’t seem that noticeable or impactful in combat) and everyone can use all the available weapons, the biggest problem with Quake Champions is the lack of variety. It is a game that will succeed or die on its maps and modes, and if it manages to pull them off then we can see a very promising eSports scene coming from the game as it will only attract the most talents FPS players, for the rest of us then it’s a pretty unforgiving game where your deaths generally outnumber your frags. 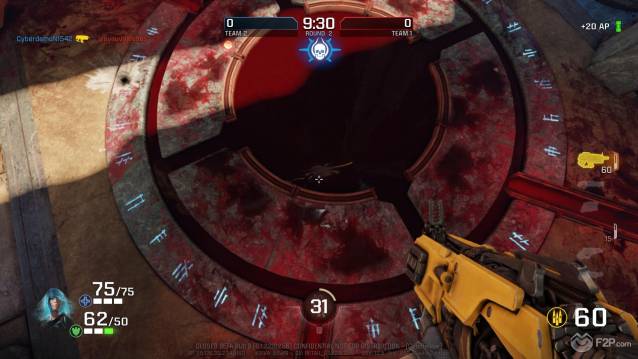 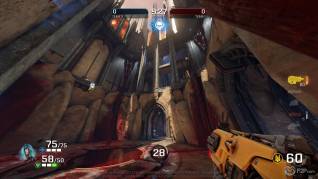 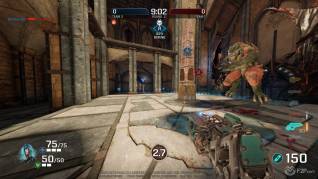