First Impressions on Arena of Fate

First Impressions on Arena of Fate

This weekend we tested Arena of Fate (probably you already watched our first look video), so here we are with our first impressions on the game, currently still in its “Technical Alpha” (though probably not for much longer). As a new player it was a bit of a different experience to having a dev at your shoulder like we had at this year’s Gamescom, pointing you through things, giving you tips along the way, but we know our way around MOBA games (who doesn’t these days?), so it was alright.

When we first logged in we got the chance to pick three heroes from a small handful of free heroes, these would be the ones we get to start out with, though in all honesty there was a brief bit of information about what they did but no details on their skill until you actually got into the game. For our experience we went with Baron Samedi, the voodoo witch doctor, Hong Gildong, a wuxia style nomad martial arts assassin and Sullivan “The Boston Strong Boy”, hopefully giving us a bit of a varied gameplay experience. After that there are three different “Clubs” you can join, though again there’s very little information up front as to what they do, but it seems like they are essentially factions where you can compete against other clubs… though you do have the option to unlock the other two clubs or switch between them it would seem. 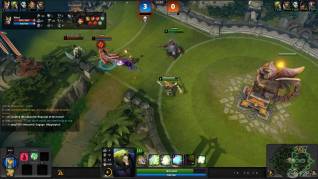 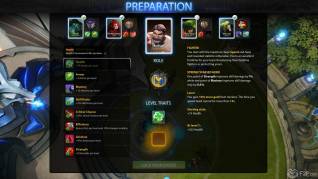 Stepping in the GUI and graphics look pretty good, which as the game is developed by Crytek you would at least expect that much, and the same can be said when in game with a real AAA polish to the overall look and feel. In comparison to other MOBA we’d say that the special effects from the moves are actually quite understated and even a little disappointing; with one title in particular that we’re considerably more familiar with there is just a general feeling of more explosions and general wow factor than I think Arena of Fate delivers.

Getting into a game is relatively easy; unfortunately the “Practice” mode is currently locked and “Custom Game” is the only available mode, which was a bit of an issue as it meant stepping into the game completely green and trying to learn as we played with relatively unfamiliar mechanics and completely new characters. So much so that in one of our games we got a rather nice “F*** top. Not even one charm”, charm being a pretty tough skill shot that lures the enemy towards you that we had successfully missed… well… pretty much every time it was needed. He was a little more sheepish when we explained that we’d literally just started playing the character for the first time and that there is no AI mode or Tutorial, but it emphasized the sort of crappy community you can get with MOBA. 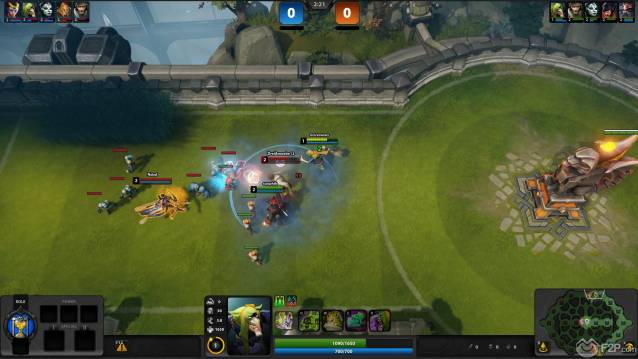 So how does it play? Well we took Hong Gildong for a spin first, hoping to make the most out of his invisibility skill and quick takedowns, but it would seem our aggressive nature and style from other MOBA really wasn’t going to pay off in a game that we were completely unfamiliar with and so we spent a lot of time dying. Dying has the double setback of meaning you aren’t able to get XP and so can’t level up in lane, and also for every seven deaths the enemy team earn 1 point, points are also earned for dropping towers and are an alternate route to victory; destroy the core building at the enemy base or have the most points when the game time ends at 20 minutes. In all honesty it never got to that in any of our games as there’s also a surrender feature, so after a few towers were dropped you had half of the team already wanting to forfeit instead of trying to make a comeback. Whether this is just because it is Alpha and there’s no ranking, or whether it is the defeatist mentality bred by MOBA that have this option, we’re not sure… but we don’t like it, as soon as the “Surrender?” popup hits the screen you already feel like the team has given up.

The in-lane levelling up and choosing new talents or abilities helps out a lot, we really don’t like the need for jumping back to base all the time to buy new gear, and combined with the healing up at your towers then it’s clear to see where the game is pushing to keep players in the field fighting. Dying it a pain as you spawn back at the base and it does feel like it takes an age to get back to the middle of the battlefield, though the res timer doesn’t seem to go up so later deaths are much more forgiving; it did feel like due to the wide lanes and big map that it took a long time to get anywhere though. 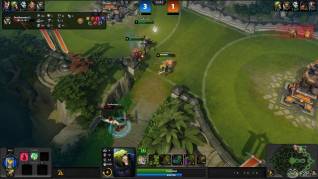 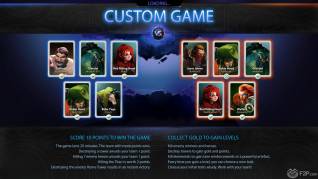 The game currently (and seemingly for the future) sticks with the traditional three lane tower pushing, but with an attempt to bring the match length down (a big issue for a lot of DOTA2 and LoL players), and whilst it has its own niche features it still doesn’t feel drastically different to either of those titles. Each battle we had FELT like it was the same thing for twenty minutes (or less as was the case), a constant poke until someone over extends and gets ripped apart (normally us..) or an accidental run in as the teams roam through the jungle and the occasional team fight erupts. For LoL and DOTA2 players this will no doubt be just fine, but it just doesn’t feel like Crytek have done enough to change the game from being very similar to two games that already completely dominate the market; enough to steal some players away who want quicker match lengths, but we’re not sure if it is different enough to make a huge impact in the MOBA genre overall.

For those, like us, who never got into LoL’s MOBA style and are far bigger fans of Blizzard’s Heroes of the Storm, the pace, characters and gameplay just felt extremely boring and tedious; but if you like LoL and DOTA2 then we don’t doubt that the game ticks all the boxes you could want.

First Look at Arena of Fate