Last week we got the chance to check out the current open beta test of action RPG HeroWarz from KOG Games, the publishers currently bringing this title to the western market. It’s a free to play PVE focused isometric brawler style game where you can choose from a handful of different characters and fight your way through dozens of action packed stages. The game has been released for the Asian market for a while and so whilst the game isn’t yet in it its final form (only 7 out of the dozens of playable characters, no PVP mode enabled yet) we played through it for a few hours to see what was currently available.

As an RPG the story element is one of the most important things, at least it should be (and yet so often isn’t with many free to play RPGs), thankfully HeroWarz has it covered, opening with a pretty awesome cinematic showing how in 2016 the world was wiped out by a cataclysmic tsunami that washed away civilization almost completely, this Tsunami was dreamed into existence by a young Dream Shifter named Ibrahim. Skip forward 500 years and it looks like what was left of the world is now under threat again as a girl, Maya, is now trapped in a dream and it is only a matter of time before something bad goes down.

We’re pretty sure that’s the story. 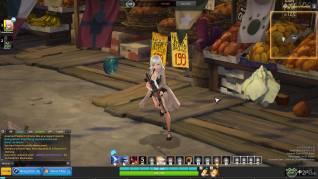 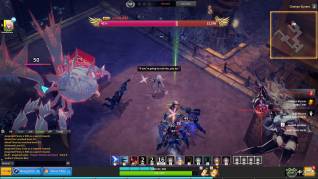 Whilst the cinematics are great, the NPC dialogue fairly on point and not too badly translated, the story is at times quite disjointed and a bit of a struggle to follow, but we can tell that what is there is pretty involved if just not always delivered clearly. The story continues throughout as you meet new NPCs, get new quests and get sent out to find some dark shards in the possession of a load of bad guys that give them some pretty brutal powers.

The characters that are available are extremely varied in their abilities, having checked out a few of them we will say that they all play very differently and so whilst making alt characters will still mean going through the same linear content, the experience itself is quite a bit different due to these individual character playstyles. For our main playthrough we went with the machinegun toting femme fatale Audrey, a ranged DPS she could put out some pretty good damage with her assault rifle but also comes equipped with some acrobatic flips and slides to help reposition, rocket launchers and explosives to do big AOE damage and a skill based sniper shot for high single target damage. As we gained XP in combat and levelled up we’d slowly unlock her range of skills, an extremely linear form of progression that whilst it wasn’t the worst thing it did seem a bit pointless. There are around a dozen skills available to pick up and from as late as level 70 the ability to customize your characters skills to add a bit more personal flavour.

With our character at the ready we jumped into the first few quests which are instanced based PVE encounters with fairly simple “clear the stage” objectives, fighting through hundreds of mobs, a handful of sub-bosses, and then a main stage boss at the end. When we first joined before we could enter into the stage area we had to hit the ready button, there was also another player there who also had to ready up, and then we entered the stage together after being informed that as there were more people the stage difficulty had been increased, which we thought was cool. Without saying a word to each other the player and I fought alongside each other clearing the content and fighting the boss together, which when complete gave us a score for clearing the stage and some rewards. 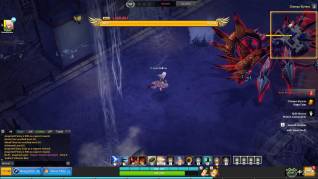 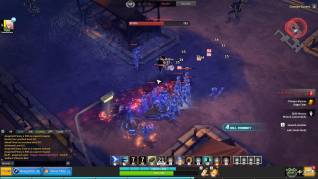 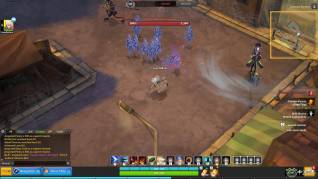 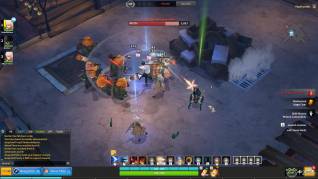 Our grouped battles continued in later stages, ending up with three of us fighting the level it made for a much more exciting battle and at times the content (even though it was early) felt relatively challenging and some of the enemies hit really hard. We were happy to see some different mechanics and attacks from the elite, sub-boss and boss characters, such as whilst fighting you would suddenly get a sniper target floating over your character and after a few seconds it would lock into position and a second later fire, meaning you had to move the moment it locked in or take some serious damage. Other mechanics revolved around dodging area of attack reticules, or getting inside non targeting areas, dodging explosives thrown around the battlefield and more. The combat is very action packed and has that beat-em-up console feel about it that honestly kept the battles extremely fun and engaging.

Unfortunately the PVP isn’t available for testing in the OBT yet, but from the Asian version it appears to be a MOBA based 3 lane team based battle, a classic format where players push waves of minions to the enemies core to try and destroy it, fighting past towers and other players. Whilst we didn’t get to test it we do think that the combat style and mechanics will lend itself extremely well to PVP, and will feel very familiar particularly in a MOBA environment. 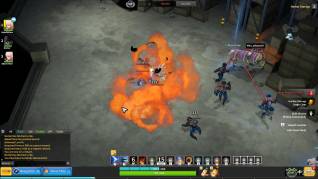 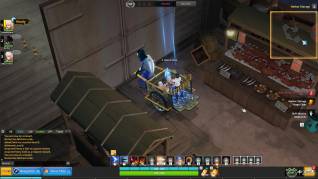 So what don’t we like? Well we’d say that the game isn’t all that feature heavy, it’s fairly streamlined to the point where other than doing the story quests there’s not much else to do (which isn’t a terrible thing, but options are nice). At later stages, far later than we got to experience, other content is locked behind a “Depth” system, where each piece of gear that you have equipped has a “Depth” value and you need to meet a Depth pre-requisite for some areas meaning players need to grind for epic gear… which can be a bit tedious. Whilst the game has quite a lot of items, with equippable gear even giving new abilities or increases on certain skills, there isn’t any form of crafting system which we feel is a bit of a loss given the priority on gear it makes acquire high epic/Depth gear even more difficult.

Overall though the game is a pretty strong title, with the future addition of PVP it’ll definitely be a fun game to pick up and play either solo or for some co-op battles.