Meeting with Blizzard at GamesCom is always an interesting experience, with BlizzCon usually only a few months away you do often end up in a position where the things you have to report on and check out are already pretty publicly known. When you get to sit down and talk with the Dev team they’re usually pretty forthcoming with a lot of question and answers, particularly if that has been the nature of the meeting that has been set up.

In previous years we’ve been ushered into a private area Blizzard typically have, one of the larger business areas that they have just to themselves, and they usually take up half of the show floor in some of public halls as anyone who has been to GamesCom can tell you. This year our “meeting” was down on the show floor to check out Hearthstone’s Curse of Naxxramas expansion, it’s a noisy and extremely busy area and we showed up just as every dev, PR and crew member were bustling around as the dozens of press descended on the area at the same time.

We were escorted to a PC set up with Hearthstone already loaded and whilst we are somewhat familiar with the game from previous testing the fact that the default language was set to German didn’t help us much. This being GamesCom (based in Köln, Germany) was hardly a big surprise, the majority of the stuff on the public floor is in German as are the public presentations and shows, so we had to get one of the PR ladies to help us switch language. After 5 minutes of messing about, changing the settings in Battle.net we called over someone else who informed us that the PCs were all locked to German and we had to play on the tablets.

We were asked if we’d played before, we had, and so we were left to our own devices. Honestly, there wasn’t that much that hasn’t already been published on the Hearthstone site, forums and blog that most people wouldn’t already know about. In the expansion players have to fight through various AI monsters and bosses to complete Naxxramas, in this play we got to check out the Construct Quarter which was headed off by “Patchwerk”, the only unlocked wing that we could check out. 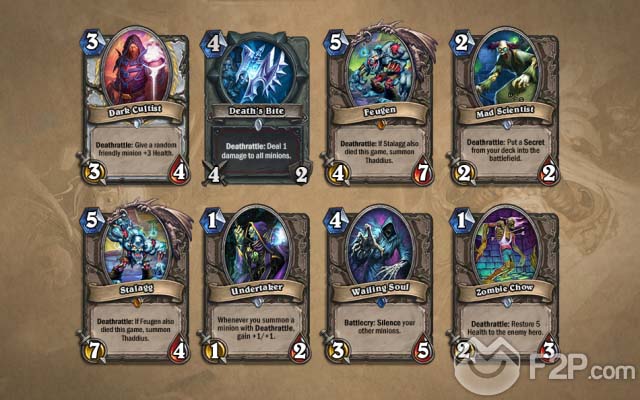 Now we had been told that all the new cards were unlocked and available for us to see, but unless you’re a hardcore Hearthstone player that doesn’t mean too much. With no cameras allowed we had a glimpse over what was available, nodded unwittingly and just fought the construct abomination.

Now I’m no pro so for a casual player with only a handful of games under their belt it was impossible for me to beat him without sitting down and maxing down a great deck (which I really don’t know how to do) so I simply used the deck that had been made by whoever was playing before me. Pathwerk hits HARD, 5 damage per turn and a hero power that could outright destroy a minion. Yeh.. we really didn’t last too long.

Beating your way through the various bosses puts new cards into your deck and for those who manage to complete the full Quarter and destroy all five bosses they’re rewarded with some Legendary cards. Players are also able to take on the Construct Quarter in Heroic Mode as well as featuring two Class Challenges that are also made available once all the bosses are defeated on Normal mode.

Needless to say we won’t be unlocking these any time soon.. because we suck. If you want to know more about Hearthstone, feel free to click on the "info" button below.