Grepolis: The Good & The Bad

Grepolis: The Good & The Bad

Grepolis is a free to play online strategy game where players rule over their own Ancient Greek polis settlement. Building up their town they will expand their borders and conquer new settlements, creating an Empire and an army to defend it in PVP against other players. Does the game match the glory of Ancient Greece, or is it just another crumbling ruin? Let’s find out!

Graphics Style - Whilst perhaps a little dated and could definitely benefit from a facelift, the graphical style of Grepolis isn't half bad and suits the game's tone

Queued Automation - Buildings and Units can only be created one at a time, however, instead of waiting around players can queue their constructions and go offline and they will be completed in order whilst AFK

Free Quick Rushing - When a building has under five minutes until it is completed then players are able to rush completion for free, which would otherwise cost premium currency, allowing players to quickly get some early ranks in their buildings

Polytheism - There are multiple Greek deities to give worship to, which grant different benefits to an Empire, allowing them to gain military, resource gathering and economy based boosts

Unengaging Combat - Whilst the "strategy" focuses on building up a viable offensive and defensive force, there are no actual mechanics to combat outside of picking the troops you want to attack with and then clicking the "Attack" button

Tedious Early Game - There is nothing to do in the early game aside from hours spent upgrading up your buildings to the next rank and attacking the odd AI bandit camp, doing the same content over and over and over

Long Build Times - To make the early game content even more dull it doesn't take long before the long build times start ramping up, meaning there's a lot of waiting around for things to complete, plus by default you can only upgrade one building at a time

Low in Features - In comparison to other online strategy games there just isn't that much to do in Grepolis, whilst it has a novel idea or two it is in general quite dated and less popular than even the developers other titles

Reliance of Premium - Premium bought currency is no longer about pay for convenience and nowadays more and more players rely on premium currency to get the edge needed for victory, forcing other competitive players to do the same or be unable to keep up 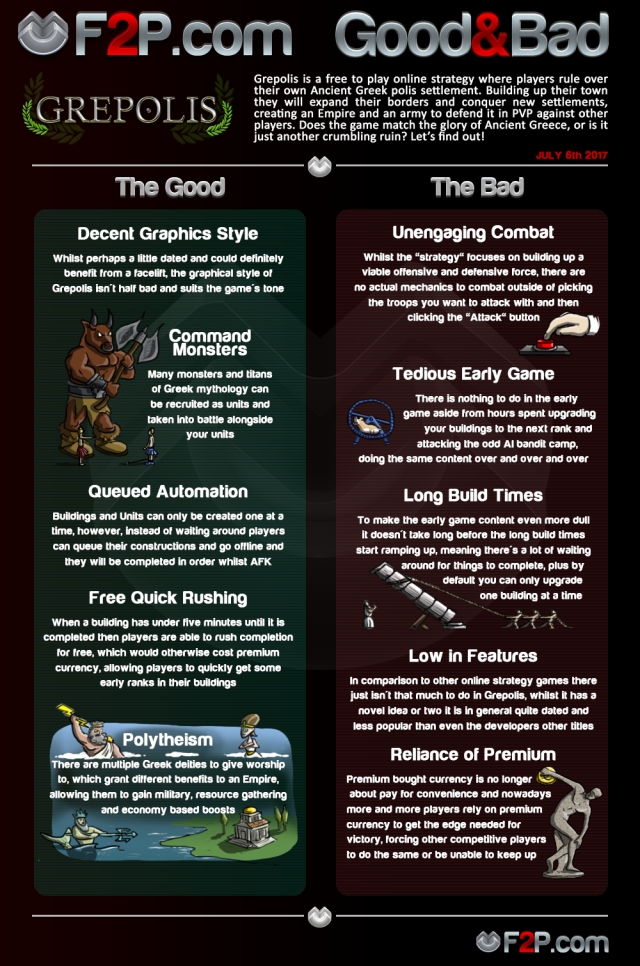