InnoGames, Germany's leading developer and publisher of mobile and online games, celebrates the tenth anniversary of the successful online strategy game, Grepolis. Since its release in 2009, millions of players from all over the world have journeyed to ancient Greece to build cities, forge alliances and expand their rule over the island kingdom. For the anniversary in September, players will benefit from special bonus weekends, during which they will have more resources, faster construction, or more battle points at their disposal.

Armin Busen, Chief Product Officer at InnoGames, explains "The success of Grepolis is further proof of the longevity of our portfolio. One of our great strengths is the constant development of games and the creation of new incentives for our players. Grepolis is our third game that has been on the market for over ten years. In addition to the regular content updates, the mobile version of our classic game contributes significantly to our success. We would like to thank all loyal players and look forward to many more exciting events and updates in the coming years."

Over the past ten years, the players have been hard at work, founding a total of 4,992,092 poleis. Not only was there a lot of planning during construction, but also during battle. A full 86,073893,153 units were trained during this time. Going into battle alone is only half as much fun, which is why players have formed 627,336 alliances to date and fought a total of 307,155,465 battles together. The diligence of the players can also be seen from the number of completed quests, with 438,822,256 successfully completed.

To turn one’s modest polis into a powerful metropolis, it's not enough to gather resources and coordinate attacks alone. Players must also earn the favour of the gods in order to enjoy decisive advantages in the quest for power and glory. Only with the support of Zeus, Hera, Athena, Hades, Poseidon or Artemis can one become a powerful ruler in ancient Greece. The poleis continue to grow with no end in sight. Courageous city founders can access the world of Grepolis on their computer’s browser and, thanks to cross-platform availability, on their mobile devices as well. Grepolis is available on both the iTunes Store and the Google Play Store. 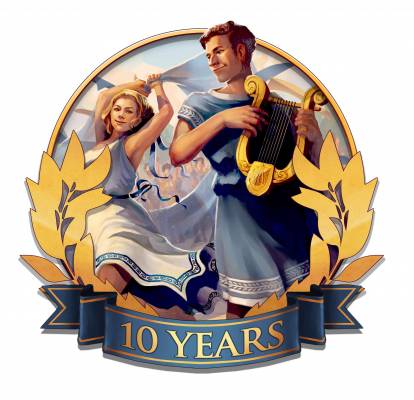 In 2009, Grepolis became InnoGames’ third game released on the market. Grepolis sends players into the world of ancient Greece: Starting with a small polis, which they build into a metropolis over the course of time, they forge powerful alliances with other players and draw on the powers of the Greek gods. In 2012, Grepolis won the award as “Best Classic Browser MMO“ at MMO of the Year. Celebrating its 10th anniversary in 2019, Grepolis is still highly acclaimed by players around the globe.