During this Gamescom we had the chance to sit down with Dennis Heinert, head of PR at InnoGames, who gave us a nice overview on what we can expect from some of their games in the future, in particular for Grepolis and Forge of Empires.

The most important thing he showed us is probably the incredible effort they are doing for bringing the games to mobile devices as well. He had a laptop, a tablet and a smartphone, and showed us how the game runs perfectly on these devices, and how you can now manage and play with your account everywhere.

The chosen game for this presentation was Grepolis. He started the game on the laptop, not without problems we have to say, as he wasn’t able to connect to the game world with the advanced city he wanted to show us, so we had to fall back on a less advanced account. Even after that, though, we had some loading problems, this time due to the Gamescom’s bad Internet connection.

However, once he managed to actually load the city in the browser, he started building a mine and then suddenly switched to the tablet, logging in with the same account and showing us how the mine was under construction on the tablet as well. Actually, the tablet version was extremely quick and smooth, running much better than the PC version even with the Gamescom’s horrible connection. Even moving the map around, zooming in and out, is extremely responsive and without traces of any lag. Heinert told us that they are going to further improve the mobile versions in order to have a perfectly optimized game experience that will follow you wherever you are. 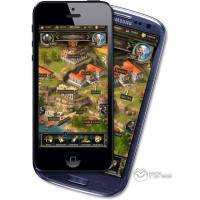 He also told us that InnoGames has two more “secret games” in development right now, and at our questions about them he could only say that one will be a strategic and management title, and the other one a more “action” one.