Last week we knew that Firefall will finally launch on July 29 and today we bring you a new video, some screenshots and more information about the Open World PvP combat.

Primarily intended to be end-game content, Firefall’s Open World Player vs. Player combat takes place in its own zone, separate from the rest of the broken, battered future earth. This zone is known as Broken Peninsula, a resource-rich area that numerous corporations vie for control, each sponsoring their own ARES teams. Players will join one of these teams to battle for control of territory and resources throughout Broken Peninsula.

Players who join an instance will automatically be placed on one of a number of teams which each represent one of the game’s major corporations. The size and number of teams will depend on the amount of players present in the remnant, but each team will have up to 20 players, and there will be between three and 10 teams in an area at any given time.

Broken Peninsula contains six large outposts and nine watchtowers, each of which has its own SIN network and each of which can be captured by any of the participating teams. Once players have control, they gain access to a number of benefits including deployable turrets, repair kits and a variety of weaponized vehicles. 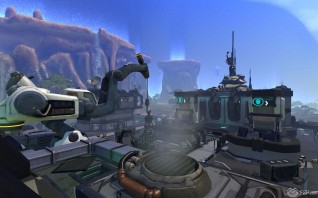 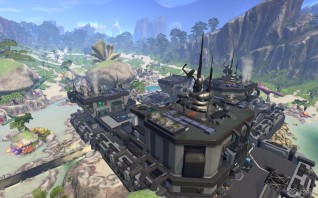 Although capturing outposts is a key part of a successful strategy, the primary goal in Firefall’s Open-world PvP is for players to gather as many resources as you can. However, resource collection in Broken Peninsula works somewhat differently. Gathered resources are not automatically credited to players. Instead, these resources are stored inside the base. What this means is if players have gathered a large amount of resources inside a base, but then another team comes and takes over the base before a successful transfer of resources takes place, the other team will get all of those resources.

When playing in Broken Peninsula, competing players are not your only opposition. By far the biggest non-player threats are the Chosen. The Chosen know of the value of the area, and they know that the Accord cannot afford the resources to properly secure it. As such, they will do anything in their power to prevent humans from transporting resources back to New Eden. This means that squads of Chosen will drop in and attack bases or thumpers in the area. On occasion, players may even run into Chosen Incursions or Death Squads.