Elvenar: The Good & The Bad

Elvenar: The Good & The Bad

Elvenar is a free to play browser-based fantasy city-builder where players explore a world of magic, seek out powerful relics to advance their people and battle against enemies through a tactical turn based combat system. Developed by InnoGames this title has seen its share of success and failure over the course of its lifetime, and so now we take a look at the best and worst aspects of the game...

Strategic Combat
With a hex based grid battlemap players move their units around a map in turn based combat, offering a more hands on combat experience where players’ decisions on the composition of the units in their army to their tactical thinking during a battle can sway combat in their favour

Diplomacy
The game offers a nice alternative to conquest through combat with a diplomacy system, allowing players to purchase land and relics from possible enemies and instead Negotiating with them and spending gold to get what you need

Open Research Tree
With dozens of available technologies to explore the research tree provides players a deep way to personally customize their civilization and focus on areas and technologies that specifically suit their goals and their play style. Periodically through the game's development new technological eras have been introduced allowing players to further expand their advancement

Repetitive Early Content
With only a few buildings available in the early game players find themselves constantly cycling through the same structures, tasks and content with very little variety to early gameplay

No Player vs Player
Elvenar focuses specifically on PVE content and, even to the cries of the community, has completely avoided PVP content where players can battle against each other directly; which feels like such a waste considering the fun tactical hex combat

A.I. Difficulty Changes
More recently the patch changes changed the way combat against AI works and made it much harder, excruciatingly harder and feels like a drive towards players having to pay for premium content in order to compete with the much more difficulty AI

Build Times
Building stuff takes forever, from early game and later content; the early game build times result in players being locked out of the game where there's nothing they can do, and the late game build times are designed in a way to be so boring/frustrating that only premium rushing will get you through it

Constant Balancing
Balancing your game is good, but the developers seem to do it with such regularity and at such a scale that everything constantly changes massively leaving players floundering and unable to plan for the future as they don't know what changes will negate all their decisions

Fellowships
A private group of players that allows them to trade with each other, provide small boosts to each other and have a private chat channel; that's the extent of Fellowships (Guilds) and so they're pretty pointless and lacking in cooperative guild content 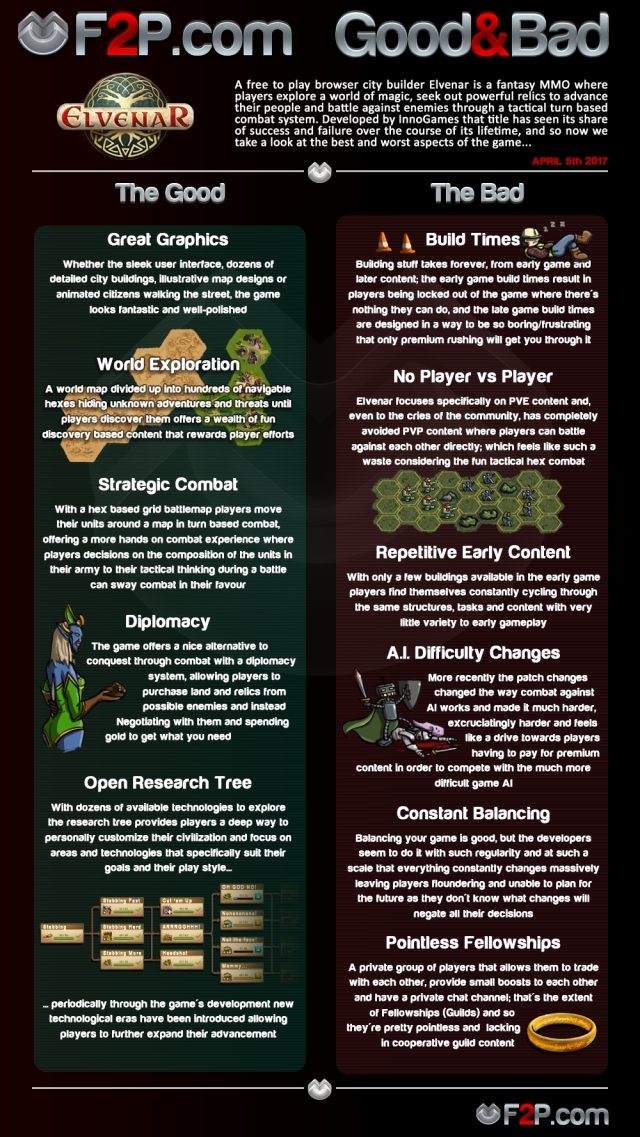