DC Universe Online is a free to play MMORPG where players step into the comic book world of DC starring the likes of Batman, The Joker, Superman, Wonder Woman and more. With PVE and PVP content, players can jump into an iconic world and create their own superhero or villain for solo or group based content. So let’s have a look at the pros and cons of DCUO...

Cinematics - The cinematics for the game (developed by the legendary Blur Studios) is one of the best cinematics we've ever seen, truly setting the tone of the games' story arc and creating a lot of hype going into the game for the first time.

Action Based Combat - The combat in the game feels like a beat em' up game, chaining together powers in combos, dodging attacks, and with so many powers and builds that gives a lot of variation so that combat is at least never boring.

You Can Be The Bad Guy - So many games focus on playing the good guy, or even in games where you are the "bad guy" this is usually brushed over with the "bad guys" not being that bad but just having a different culture and view of life that conflicts with the "good" faction that want to end you... in DCUO you can just be a Villain plain and simple; and sometimes it's good to be bad!

Iconic Setting - The DC Universe is fantastic and with the age of the superhero well upon us with all the current TV shows and movies it's great to see a lot of crossover in DCUO showing that despite the age of the game it's still trying to stay current.

Legends PVP - You can fight as your favourite superheroes and villains in the game; whilst the main portion of the game consists of building up your own character you do get the chance to play as some famous comic book characters in PVP and using their unique powers.

You Get a Sidekick - Nothing says "I'm the Superhero" like having your own personal helper running around after you in the form of a sidekick, which you can customize yourself so that your outfits match.

Boring Mentors - The most significant heroes and villains in the game are the mentors for the players who get to choose one as their personal mentor. They unfortunately barely have an impact in the story or the players training, even more so that any player (regardless of choosing them as their mentor) can still complete each mentors quests.

PS3 Version - Whilst the game being cross-platform is great, the game can only be as good as its weakest platform, in this case the PS3. The dated hardware severely limits the game development in terms of graphical upgrades and resource hungry features so the PC, Xbox One and PS4 are held back.

Too Easy - The game content and the mobs you face are just way too easy, from the moment you log in and up to max level there's very little overwhelming challenge that requires much in the way of tactics.

Beyond Level 30 is P2P - The game is advertised as free to play, but the reality is that there is essentially nothing to do once you reach level 30 as content is locked behind a paywall or requires subscription; this makes the "free to play" more like a trial version of the game.

Repetitive End Game - If you do buy end game content DLC, or pay for subs then you get access to the end game content, which whilst initially fun just becomes a HUGE gear grind where you have to keep repeating the same content over and over an immense number of times for tiered gear.

Huge Empty World - Just run around the streets of Metropolis and you'll quickly see that the open world feels like a ghost town; huge open streets with a sprinkling of NPCs walking around is just a real immersion breaking sight to see. 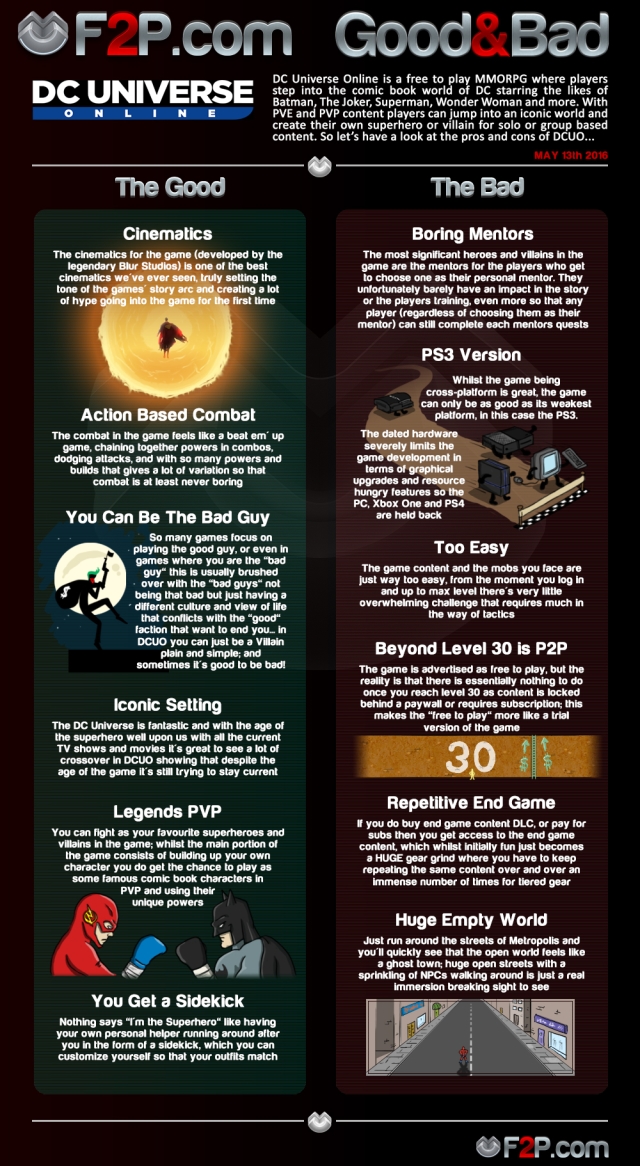