In Conflict of Nations Modern War 3 After much anticipation, we are very excited to see these special, unique characters in every players conquest for world domination. Without further ado, let's dig into the features and changes this update introduces. Please keep in mind that all balancing changes are versioned and will only appear for players in the new games they join. 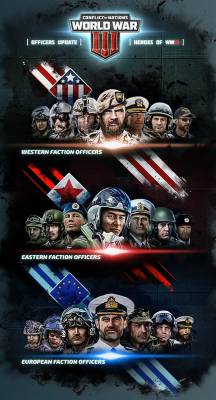 ● Officers will be graphically visible in your stack as they will always precede the units contained within said stack. This will make it easier to identify them on the field
● These characters will have a slight dependency on the player rank with regards to Research
● There is an officer for each Unit Type: Infantry, Airborne, Tank, Helicopter, Naval, Fighter & Submarine
● Only 1 Officer at a time (per unit type) can be used on the field. If an officer dies, the player can mobilise him again without any limit.
● The provided bonuses by Officers are visible in the description section
● Officers are renamable, names are visible for all other players in the match
● Graphical portraits for each doctrine giving a personal flavour to player armies
● New Sound effects for each officer and each order they may be tasked with