Bytro Labs GmbH publisher of Call of War World War II collaboration with F2P.com, to bring you this special Starter Pack for all the new players for Call of War. 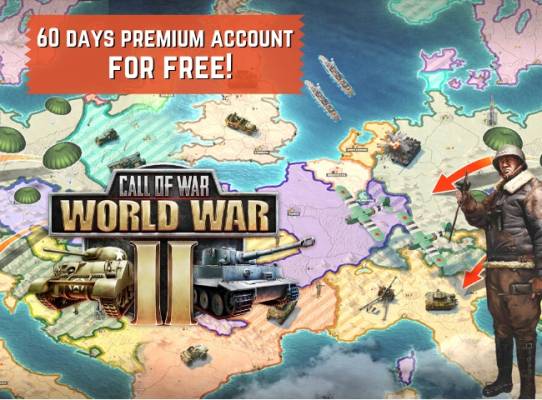 60 days of high Command premium account for every newly registered player for Call of War.

It will be available starting today until May 12th end of the day.

Step 2. Register to the game use this link Call of War for PC, Android devices Call of War or iOS here Call of War only the new users who use these links will win the Starter Pack for 15 Euros / dollars.

Step 3. To redeem your 15 euro starter pack, create an account and pass the tutorial. Once you do, you will have 25,000 gold coins and one month of High Command premium account on your profile on Call of War.

Event for all the players for Call of War The WW2, English Channel event, from today since May 12.

France is occupied and war is raging across the continent. British and German forces are concentrated on both sides of the English Channel, preparing to invade! Who will make the first move? Will Germany bring the Blitz to the British Isles or will British forces plant the seed of freedom to rid Europe from German occupation?

In our “English Channel” event, you become the leader of the United Kingdom or Germany in a battle between you and your opponent. No allies. No external interferences.
Just you, the enemy, and history!

For this special event we will frequently update you about the community's progress during the event on Facebook and Twitter. These updates will include stats and infos of all players playing as Germany vs all players playing as the United Kingdom. You may fight this battle all by yourself, but the war is fought by all of you!

During the sign-up period the event maps can be found at the top of the games list. Join these event maps to participate. We wish you good luck and much fun!


Call of War, also known as 1942: Call of War, is a free-to-play cross-platform multiplayer strategy game developed by Bytro Labs where players can command forces and fight in battles of World War II. In Call of War it is the year 1942 and the world is full of conflict. The most powerful nations in the world are warring with each other and need a leader, which is where you come in, you can play on PC, iOS, Android and Steam for FREE