Call of War is a free to player MMO strategy, Call of War puts players in the command seat as they are leaders of their country at the beginning of WW2, able to rewrite history as they choose who they shall fight and who they shall become allies of in exciting PVP real time combat. 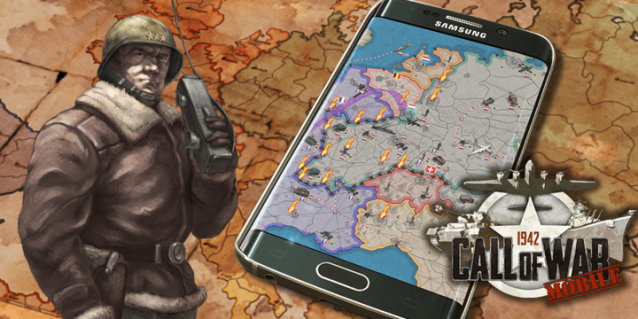 - WW2 Themed Strategy
- Control your own country
- Train up your own army
- Fight in PVP against other players
- Conquer, Trade or use Diplomacy
- Earn Victory Points to win the game
- Free to play
- Browser Gameplay

The core of the games revolves around access resources, training military units and controlling territory from the realistic map of North America and Europe, the entire map broken up into various province territories as controlled by specific countries. A player rules over one of these countries when they start out, owning certain provinces and their respective bonuses, and must build up a military to defend them and also expand their borders.

Each world/map can hold a set number of players, each controlling one of the countries, and will start at Day 1 of the round. Key provinces around the map have a number of Victory Points associated with them, by controlling these key locations players will add the provinces’ Victory Points to their total; have enough Victory Points and the player will be declared the winner of the game and the round ends.

There are various resources in the game such as Food, Money, Goods, etc. that players must acquire in order to construct buildings and train up units for their army, as well as an initial cost of resources players also need to pay an ongoing maintenance for each unity they have in their army. Resources are primarily earned through controlling provinces, all provinces give out Manpower and Money, but some also have access to key resources making them extremely valuable and key targets in an attack.

One of the key aspects to the game is managing time, whether spent researching technologies, upgrading buildings in a province or producing a particular unit, everything takes time to perform. Similarly units moving across the map can take hours or days depending on how far they must travel, so planning ahead is key to success. Players can only construct one building, or produce one unit, at a time in each province and are unable to queue building/producing by default; however, with the Higher Circle premium account purchased with Gold, players have the ability to queue so that they can manage their affairs when offline.

To unlock different units then players must research corresponding technologies in the 5 main research trees for each unity type: Armor, Naval, Air and Infantry, as well as the Secret tree that unlocks all manner of powerful units. Technologies can only be researched after a certain number of days have passed in the round, each technology having its own pre-requisite day, and players must also unlock pre-requisite technologies to get access to higher tier units. 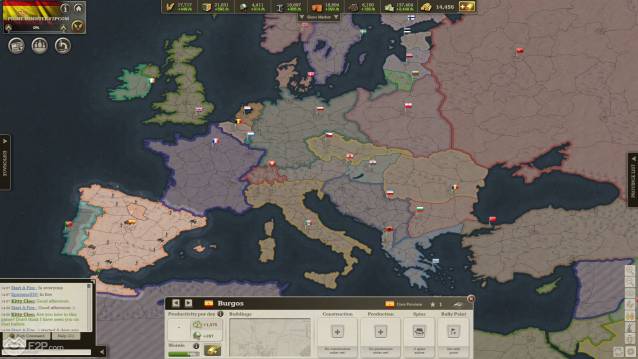 Players are able to train up a variety of spies and put them into their employ, either having them monitor their own territories conducting counter surveillance to stop rival spies, or conducting a variety of missions of their own. Spies can be used to find out important intel on rival players, pinpoint the location of their armies, hinder their resource production and more.

Each day the worlds newspaper is updated to show people what key events have happened, generally shortly after they have taken place, giving players a constant stream of information as to how the world is progressing, who has declared war on who, and which rivals are now working together!

Gold is a premium currency in the game that must be purchased with real world money, with it players can part rush the majority of building upgrades or unit productions and also research unlocking to get them to finish quicker. When a player finds himself short on resources they can also use Gold to purchase an upgrade or unit with gold, the cost being equivalent to the resources normally required to create it.