Aion: The Good & The Bad

Aion: The Good & The Bad

Aion is a free to play fantasy themed MMORPG from NCSoft where players choose to align themselves to one of two powerful factions; the angelic Elyos or the devilish Asmodian. Featuring quest-based progression and multiple expansions, classes and content, let’s examine what is Good and Bad about the game...

Player Flight - No need for flying mounts in this game as all characters will ultimately earn their wings; more than just the aesthetics that other RPGs provide, in Aion players are actually able to fly around in order to explore, travel and even fight!

World Design - Exploration is a must in the game, whilst it doesn't necessarily reward you with any system, it is a fantastically designed world and well worth taking a look around and different regions capture a different tone perfectly

Deep Character Creation - With a whole host of sliders, shaders and options players can make truly original and unique looking characters; from the stunning to the grotesque, it is a very in-depth system available to players to make characters

Less Grind - Previously the game was notorious for being a classic "Korean Grinder" where players had to kill the same things over and over to level up; over the years the amount of grind needed has been severely reduced and creates an overall much more fun game to play

PVP Focused - There are lots of options when it comes to combat, players can battle in arenas or world PVP, and the conflict between the two factions is so central to the game that combat isn't really something that players can fully opt out of and only provides a small handful of "safe zones"

Dated - From graphics to mechanics and systems, Aion is very much starting to look it's age (coming up on 9 years old) and even with the odd revamp and touch up here and there it's still easy to see that it's an MMORPG of a previous generation of gamer

No PVP "Off Switch" - Whilst we love the PVP-centric focus of the game, it just isn't for everybody, and a lot of players would love to experience the game but be able to PVE or gather resources in peace without constantly watching their backs for ganking PKers

Gear Breaking - When failing an enchantment to improve a piece of gear's stats, then the item itself will be destroyed; this means that players who put cash into the game, or even just a hell of a lot of time, to acquire powerful items can lose them in a second

Tab-Target Combat - Whilst the flow of combat is fun, tab targeting is behind in the times and action aim based combat is where it's at, unfortunately Aion's combat still clings to a less mechanically challenging and lower skill requirement system

Pay 2 Win - It's impossible for new players to catch up, and older players to keep up, with those at the top ranks without spending some cash. The disparity between F2P and P2W players is disheartening 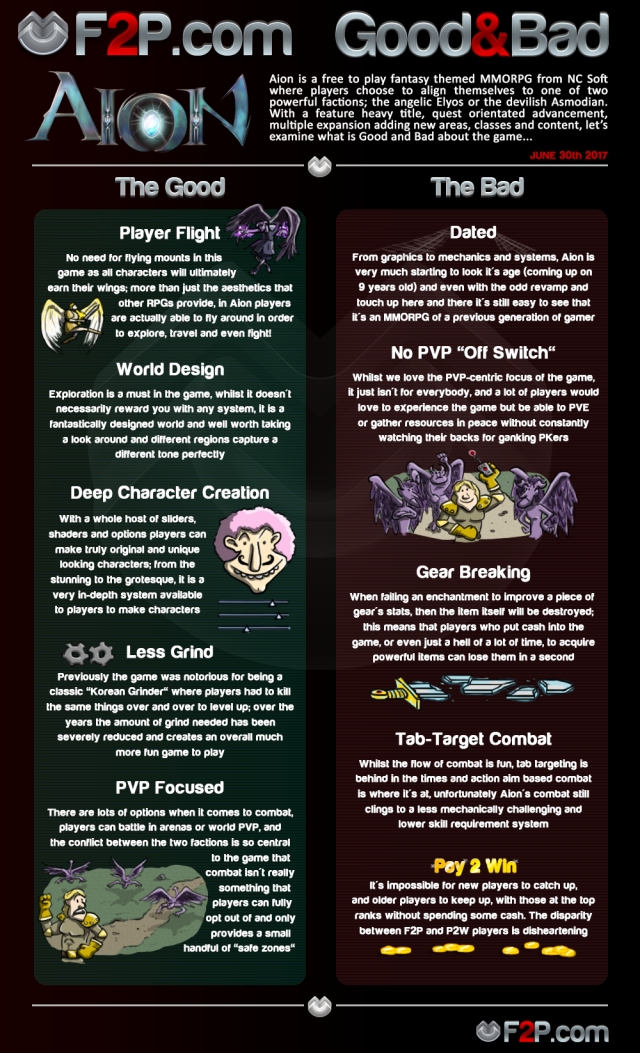