World of Warships: The Good & The Bad

World of Warships: The Good & The Bad

World of Warships is a free to play naval combat simulator from Wargaming and part of the “World of” series of games; in it players will captain their own huge battleships in the iconic events of WW2 battling in team based objective focused matches. Let's look over some of the Good & Bad points of the game and see whether the title stays afloat or sinks to the bottom of the ocean!

Gun Control - No not left-wing democrats trying take your AK-47 away from you, we mean the controllable turrets on each ship. The game has a cool locking on system where all the turrets on your ship will slowly turn to aim where your cursor is pointing, providing it is within their individual firing arc, making a players positioning even more important

Slower Combat Strategy - Unlike other team based "shooters" World of Warships has stayed true to the concept of large naval battles where forward thinking, planning and positioning are extremely important and the pace of combat is much more realistic

Mix of Frantic Engagements - It's not all smooth sailing on the ocean, when fights do break out and more close quarters skirmishes happen then the fighting is intense and atmospheric with shells exploding, fires to put out, torpedoes to dodge and more

Huge Number of Ships - There are hundreds of available ships in the game divided up into different nations and classes, everything from battleships to aircraft carriers, as well as a number of notable ships from WW2, all of which can be extensively customized

Number of Maps - There are currently 28 different maps in the game for players to choose from, set in different locations with different land and island layouts; the wide choice of maps offers some variation with the game

The Maps - Whilst the number of maps is great, the problem is that a lot of them are locked to certain Tier of ships, so they're not all freely accessibly, plus, whilst different island/land layouts are fine... the maps do feel similar given that you're just ships on the sea

Forced Ship Purchases - A system throughout all the "World of..." titles is in order for players to unlock higher tier ships they have to play and level up in lower tier ones; forcing players to spend their currency (or cash) to buy and then play with ships they might not enjoy

Limited Game Modes - Whilst there are different variations of the game modes, and the possibility to play as a co-op, team or clan, there is essentially only three game modes: Standard, Encounter and Domination, with so few modes (which are all quite similar) it can get a little boring after a while

Steep Learning Curve - Whilst a high skill cap/high strategy is far from a bad thing and picking up how to play the game is relatively easy; it is a lack of knowledge in the small nuances and subtleties of the game's strategy that can easily make or break players and often make it difficult to find a good team

Repair Costs - An absolute money sink that really starts to put on the pressure in late game/higher tier ships; with ships taking damage in battle and always needing cash spending on them it becomes difficult to save that money to put towards mods, ammo and even new ships, it's an even more expensive time for F2P Players

So there's what we think is the best and worst about World of Warships, let us know what you love and hate about the game in the comments below! 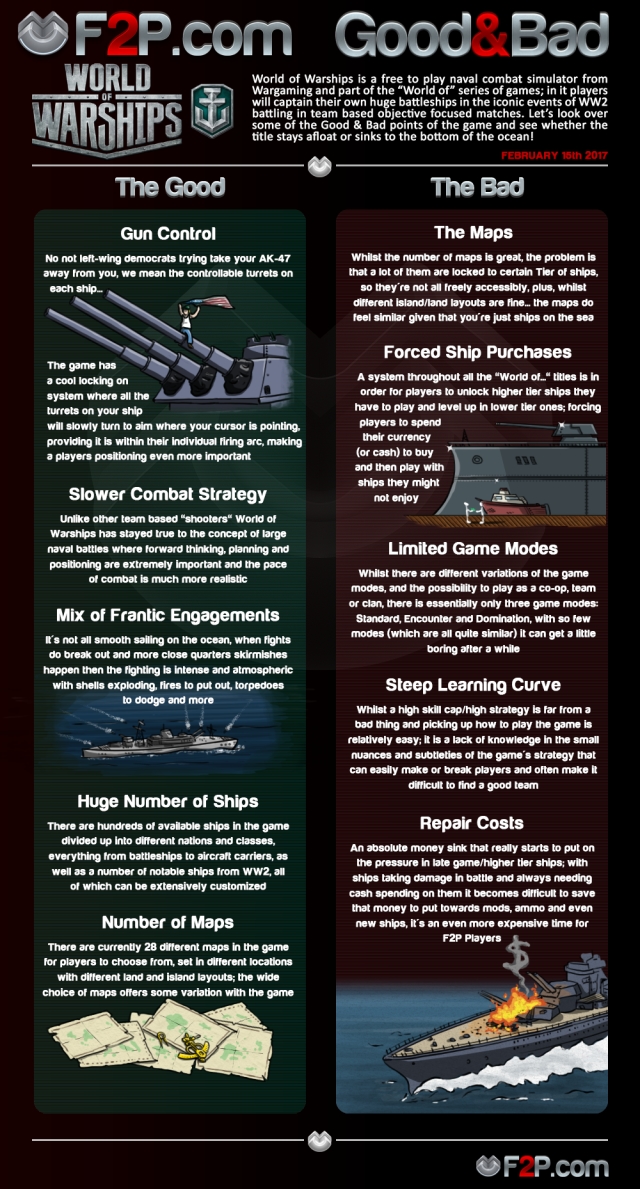