Battles can be very intense and exciting, wide choice of ships, positioning and planning adds high levels of strategy.

Movement can be slow and reaching objectives can take a while if there’s no combat, the various maps don’t impact the match that much.

World of Warships has cropped back up on our radar, having not played the game since its closed beta back in March we got the chance to take another look over the game now that release is in full swing and included the new German and Soviet warships. In all honesty as we’ve not been playing the game constantly it’s pretty hard to see what (if any) changed have really taken place and we’re not so familiar with the game that we can even tell the difference between the new battleships all that well, but as ever we endeavour to do what we can.

The account we had been provided was at level 8 with, as far as we could tell, a full complement of Japanese and USA ships to choose from, but for the German ships we only had the starter Hermelin cruiser, and for the Soviets we had the starter Orlan cruiser along with the Aurora (Tier III) and Murmansk (Tier V) Premium Cruisers. However, we had enough Doubloons that we could have probably bought the entire fleets over once more with full upgrades, unfortunately as we have already said it wasn’t overly obvious from one ship to the next what the nuances of each one was with improved accuracy, maneuverability or survivability, etc. 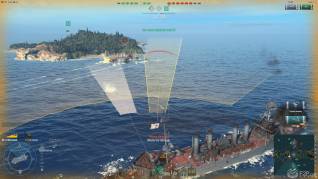 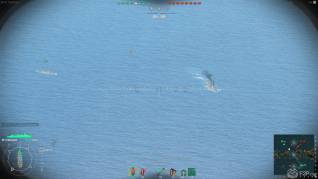 For us the biggest differences were the available Ammunition & Consumables available between the different ships, with the Murmansk seemingly giving us more options such as torpedoes and Spotting consumables for sending up planes to give you a great range for your gun attacks. Whilst we focused our attention primarily on the Murmansk we were as often not turned to rubble relatively early in our matches and so would have to switch to one of our other dozens of ships until that match ended.

We were dropped into the game at level 8, which whilst not putting us head to head with the elite of the game it did mean we were fighting alongside players who had a much firmer knowledge of the game than we did. The game isn’t exactly difficult to pick up, but it does have some finer points that take a little longer to work out and perfect, for us we had to learn the hard way that going deep and guns blazing meant very short match times indeed.

Positioning plays an interesting but vital role in the game, and for a number of reasons. Firstly when being attacked by a ship if your are positioned so that you are side on to the enemy then you make yourself a much larger target to hit, as well as the potential of having multiple vital areas damaged at the same time. Secondly the location of side firing (broadside) torpedoes once again means as a players we had to be conscious of how we were positioned in relation to the many enemies we were going up against. These tactics are all relatively simple and easy to work out, what took a little more time was getting used to the many targeting reticules that showed where our various gun turrets were pointing, all guns would try to line up on you main gun cursor, but depending on the position of your ship and the angle you were trying to fire at then sometimes it was impossible for certain turrets to turn in that direction. 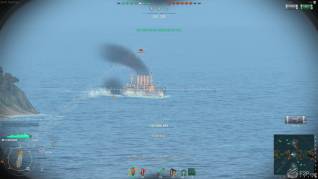 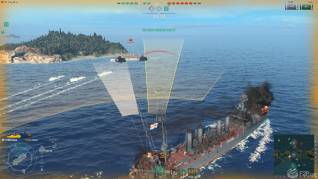 Ship positioning most definitely turns the game into a strategy based shooter as bad positioning could, and did, make or break our attacks on the enemy. In line with this, and requiring much more forward planning, was having good map awareness and keeping an eye out where the red enemy ship markers were popping up in relation to us. In comparison aiming and steering feels extremely simple and so we didn’t have to think too much about controlling our ships, even without a tutorial (as we started at level 8) we were managing to bag plenty of hits and destroying enemies as ribbon after ribbon of our achievement would pop up on our screen for the battle.

Although our first few games were a little shaky, persistence is key as we started to get more to grips with the flow of the game, going solo is very much a hit or miss play; if you catch the enemy out when they’re engaged then you can snipe them from relative safety. However, more often than not when we tried this we’d be outnumbered and outgunned before quickly taking a trip to the bottom of the ocean.

The game is definitely in a polished state and offers the type of gameplay experience I believe it intends; movement is far faster the its original conception and the battles are faster, fun and more high adrenaline than you might expect from a more strategy focused shooter. The detail of graphics and precision damage physics makes you feel every impact, hold your breath with each shot fired as you watch the arc slowly descend and awaiting impact, it’s a fun game that sits in a relatively unique position in the MMO genre. 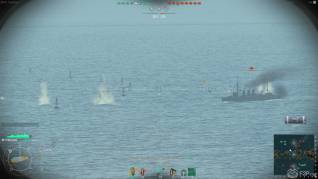 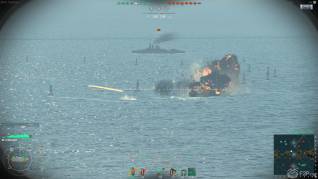 If you want to know more about this title click on the info button below to visit our profile.