SWTOR: The Good & The Bad

Star Wars: The Old Republic (SWTOR) is a free to play MMORPG from EA/BioWare set in the epic scifi Star Wars franchise long before the rise of Darth Vader, Luke Skywalker and other iconic figures, in a time where both Sith and Jedi were known across the galaxy. A feature packed MMORPG that saw some difficulties during its initial release, the game has gone from strength to strength, but not everything about the game is ideal.

Dark/Light Side Choices - Most of your actions in the game have a dark side or light side result, which is tracked with your own personal Force rating; play as a "light side" Sith and perform good actions, or a falling Jedi performing dark side actions

Class Storylines - Each class has a unique storyline that takes players through near the full range of levels, the quests are hand crafted around the class and put the player specifically in the lead role

Exploration Content - There is lots of content to cater towards players who love exploration; finding datacrons hidden in hard to find/reach locations, unlocking data entries in your Codex and lots of achievements

Choose Companion Class - You can now choose the class of your companion characters; as they are so interactive there was nothing worse than having to choose an annoying companion you hated being with just so you could use their abilities in combat

Character & Spaceship PVP - Players can fight in traditional character PVP Warzones with their class, or get in their star fighters and battle from the cockpit in space based PVP battles!

Range of Classes - Whilst there are 8 classes there are really only 4 with an altered mirrored version for the opposing faction, also they haven't added any new classes since the initial release... four years ago...

F2P Restrictions - The limitations on Free to Play accounts are extremely heavy, instead of focusing on giving more advantages to subscribers EA/BioWare have focused more on restricting F2P Accounts including a credit cap, limited crew skills, limited number of Flashpoint attempts, no trading, and only allowing them to pick Sprint up at level 10...

Game is Too Easy - With update 4.0 the game shifted to allow players to get to level 60 through pretty much just doing their class quests; the result is that this levelling process is now extremely easy and content really lacks a challenge

No Faction Switching - Given that a large part of the game and character decisions are based on the Light/Dark side choices, it seems like it's a missed opportunity to allow players to switch factions after finishing their class quests, e.g. a Sith Warrior getting enough light side points and joining the Republic!

No Chat Bubbles - Talking with players in busy areas is almost impossible due to only having window chat, text speeds by so fast that you can barely keep up with any conversations, making roleplaying in large groups particularly difficult 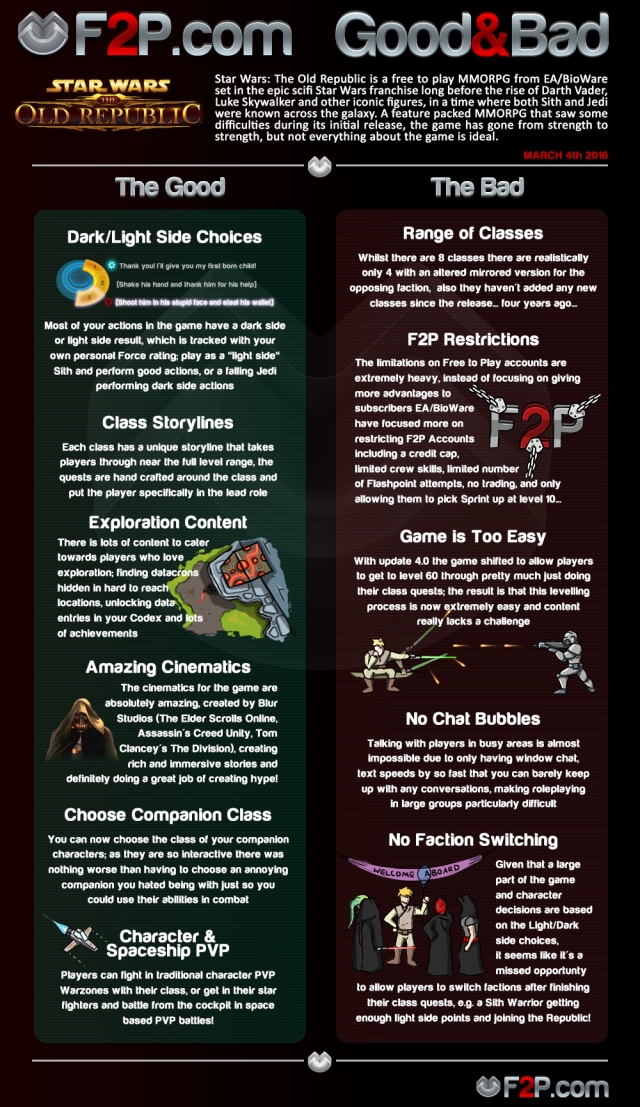