In 2019 we will celebrate the 10th anniversary of Supremacy 1914! What better time than now to talk about the future of the game that many of you have been playing for almost a decade now.

In order to prepare for the big anniversary next year, we have something special planned which will boost Supremacy 1914 to a whole new level - especially in terms of its general look and feel. 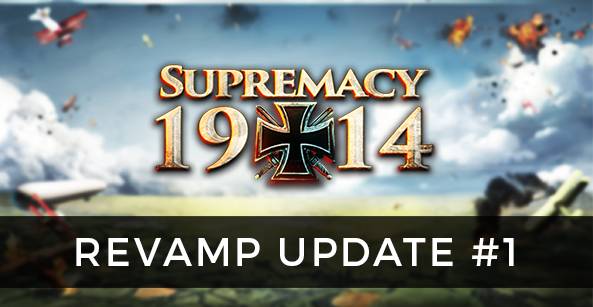 ● With the upcoming revamp we will take a technological leap forward and combine it with a general design update.

● By introducing WebGL as a state-of-the-art rendering technology we will bring a whole new level of detail to the map - while still allowing for precise controls at different zoom levels.

● We will introduce a more up-to-date map view to the game which will become the default for new users (while the ‘classic’ view will remain a selectable option for existing players for some time).

● This will include more map and unit details, nicer colors and an overall more realistic appearance.

● The user interface (menus, dialogues etc.) will get a new design, giving it a bit more polish but staying true to the Supremacy 1914 legacy.

● Units and buildings, on the other hand, will feature a level of detail that does not compare to any previous versions of S1914.

● Our approach is to capture the 'grittiness' and seriousness of World War I in those details and mix it with a 'modern' feeling that is reminiscent of the fact that it is today considered the first ‘modern’ war in history.

Remeber Supremacy 1914 is a free-to-play browser MMORPG, you can read more about Supremacy1914 in F2P.com