Bytro Labs GmbH publisher of Supremacy 1914 - The Great War collaboration with F2P.com, to bring you this special Giveaway for all the new users for Supremacy 1914 The World War I and for all the users new's ones and actuals a nice event on the game. 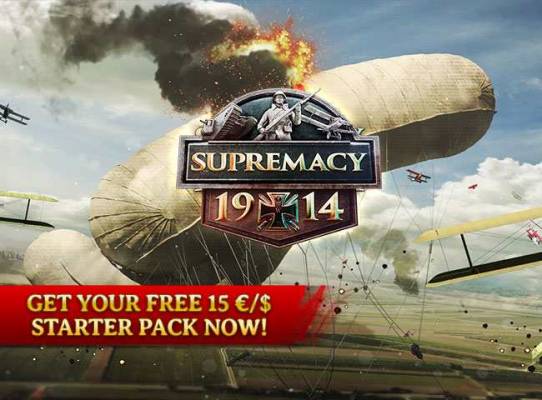 It will be available starting today until July 26th end of the day.

Step 3. To redeem your 15 euro starter pack, create an account and pass the tutorial. Once you do, you will have three months of High Command premium account on your profile.

Supremacy 1914 The World War I is a Cross-platform MMO real-time strategy game for PC (browser-based MMORTS), iOS and Android devices and Steam. The game is developed and published by Bytro Labs.

In Supremacy 1914, you become head of a mighty nation in precarious Europe after the turn of the century. You face the challenge to become the undisputed sovereign leader of the whole continent using smart diplomacy or simply the brute force of your glorious armies. Strategists can play private rounds with friends or against competitors from all around the world, completely free of charge. Already more than 4.5 million players have registered for this strategy game by Bytro. Supremacy 1914 won the Audience-Award in the Browser Game of the Year-election.

Veteran grand strategy players will see their strategic skills be put to use on the battlefields in this huge World War I game, battling with economy, armies and the ever growing threat presented by opponents. Players can play as Wilhelm II or change history however they like. In Supremacy the imagination and skill are the only limits! Up to 500 players can compete in real time on historical and fictional scenarios.