Skyforge: The Good & The Bad

Skyforge: The Good & The Bad

Play as a God in Skyforge, a free to play sci-fantasy MMORPG, working your way up from an immortal protector you will answer the prayers of the people and earn your own worshippers. With lots of PVP, PVE and end-game focused content this beautifully designed game seems to have it all... or does it?

Cinematic Gameplay - Quality graphics and seamless cinematics that drift into gameplay, the game plays like an interactive movie at times.

The Ascension Atlas  - An extensive ability tree for each individual class allows players to customize their preferred classes in more detail.

Accessible Features - From mail, crafting, selling junk loot to vendors, players can do all of this in the field without having to return to base; as well as this quests update without the need of constantly going back and forth to quest givers.

Class Switching - Players can switch between all the available classes in the game depending on the situation at hand and their opponents.

Pantheon Wars - For guilds (Pantheons) with at least 100 players they fight in simultaneous mass scale PVP and PVE battles against other Pantheons to battle in a final fight and win exclusive rewards.

Takes A Long Time to Customize Classes - Whilst the Ascension Atlas opens some extensive customization options at later stages, early on it is very linear and there's very little in the way of choice when choosing what areas to improve.

Highbies in Lowbie Areas - High level players constantly farming bosses in low level regions takes away a lot of the fun from those lower level players who like a challenge.

Mid-Late Game Repetition - Towards the mid of the game you find yourself repeating the same grind focused content over and over and over... and over.

Sparks Cap - Sparks are needed to progress your classes on the Ascension Atlas, however the game has a built in limit to how many sparks you can earn each week essentially stopping progression.

Accessing Classes - To access some of the cooler classes you often have to grind some of the less fun/interesting classes before you can play them.

Pay 2 Win - An expanding cap where players can pay to skip content and advance faster than those playing the game leads to some fairly obvious pay to win, and unscaled end-game leads to some particularly bad P2W in the PVP domain . 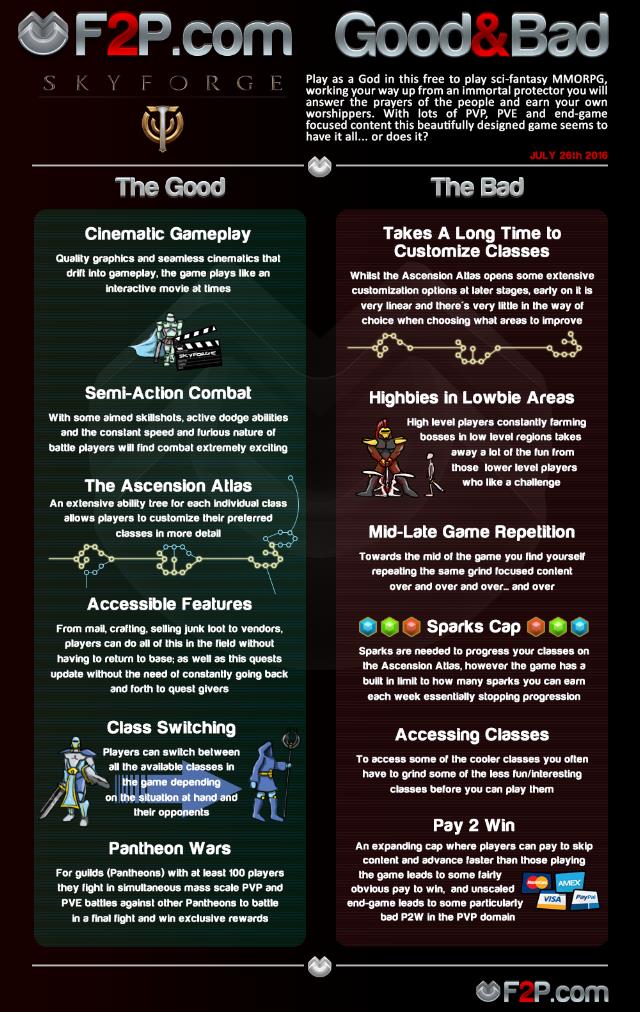