A couple of weeks ago, Trion Worlds, the software house behind Rift and Defiance, announced a brand new interesting project called Trove. They released some details, a bunch of screenshots and a trailer highlighting the main features and the general feeling of the game. But what is Trove, why has it showed up on our radar and what has it done to deserve a whole article about it?

If you know Minecraft (who doesn't?!?) and Cube World (you should check this one out asap), the first thing that will come to your head once you have taken a look at Trove's trailer and screenshots is probably going to be "Wow, this is basically Minecraft meets Cube World!". Actually, the procedurally generated world from Trove are extremely similar to the ones already seen in Cube World (too similar, someone would dare to say?) with the only evident difference being the character style, much more humorous and funny and less JRPG-esque in Trove compared to the latter. 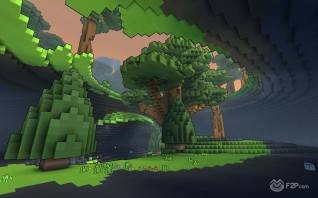 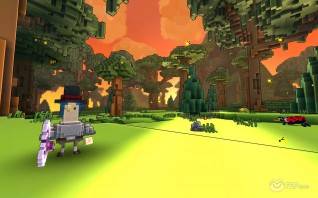 However, Trove's intention seems to be to take inspiration from the best parts of these games, for example the construction/destruction and crafting from Minecraft, the voxel world style and combat from Cube World, the choice of the cube as the basic unit (of course), and to bring all this stuff online in a new MMO experience.

The game promises to offer a unique mix of random procedurally generated content and handcrafted elements with fully buildable/destructible worlds, randomly generated worlds and dungeons, action combat, switchable classes, bosses, story-driven quests, character customization, loot and even the chance to build your very own personal space which will persist across servers. As you can see there are a lot of possibilities here, and it seems TOO good to be true. Can you imagine exploring a destructible seamless voxel-based world with your friends, ready to build your own headquarters in a pure Minecraft style and fight bosses with a fast paced action combat system? Sounds amazing, right? 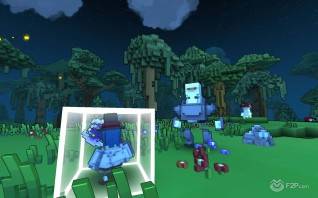 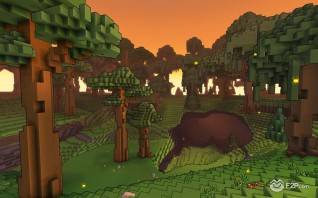 Moreover, from what we have read, you will also be able to participate in the game development by creating new weapons, creatures and environments which will appear in your world and in other players' worlds; however, right now, it's not entirely clear how del this process is going to work, if it is going to be somewhat automatic, or using a system like the one already seen in Neverwinter with its Foundry, where players can vote and promote the best creations, or something entirely different. Nothing is also known - for now - about any PvP system, the instanced or non-instanced nature of the housing system, if there will be private servers, private games and so on. All this lack of information is just increasing the sense of mystery and hype around the game, and we can't wait to know more details and see more gameplay action!

We have to say that we've always wanted to play an MMO version of the still incomplete Cube World, as it is amazing to explore an ever-changing world where unexpected threats and adventures lurk behind every corner, and it would be even more enjoyable to do it with friends and strangers, meeting new adventurers during our journeys. Hopefully, this is exactly what Trove is going to offer, with the addition of the chance to do amazing things such as blow up a part of a mountain and discover a randomly generated underground cave (you have been a good teacher, Minecraft, thank you). The guys at Trion Worlds seem to have understood the importance of the sense of exploration and discovery which is rarely seen as a main feature today in the MMO market. Sure, you can explore a new world, but how long can it last? Usually once you reach the level cap (and it is a quick race these days) you are stuck with repeating the same content and the same patterns of monsters over and over again, with the death of exploration. So let's hope to see something truly new, and let's keep our fingers crossed for Trove and its random generation content, where, exploration and sense of discovery seem to be the main keywords.