Neverwinter: The Good & The Bad

Neverwinter: The Good & The Bad

A free to play fantasy MMORPG from Cryptic/Perfect World Entertainment, Neverwinter transports players to Ed Greenwood’s land of elves, dwarves, magic and more; the Forgotten Realms. Rise as a hero of the realm and follow an epic story-driven campaign complete with PVE quests, PVP, crafting and more.

THE GOOD
• Dungeons & Dragons - Not only does the game adopt one of the biggest tabletops of all time as its core mechanics, but the game is set in one of the most iconic fantasy worlds of all me: The Forgotten Realms
• Expansion Heavy - Players will constantly see lots of updates punctuated with larger expansions with huge features, changes and classes added to the game
• 8* Classes - There are 8 core classes available to play adding completely unique combat styles and core mechanics; each class also has 2 Paragon paths which further deviates them essentially making 16 different classes!
• Action Combat - Players can't rely on tab-targeting and require an element of skill with their aiming when fighting in PVE or PVP
• Multi-Platform - Released on the PC and then later released on the XBox One, players will now be able to experience their fantastic journey on the PS4
• The Foundry - Create your own instanced based dungeons from thousands of terrain features, decorations, items then fill them with NPC quest givers and enemy NPCs that you must defeat

THE BAD
• Instanced World Areas - The playerbase is divided up into multiple instances of exactly the same area to increase performance, but it makes world feel empty in questing areas especially
• PVE Difficulty Scaling - PVE for the most part ranges from being extremely easy and quite dull with the lack of challenge, or ridiculously difficult and near impossible to compete even with high gear/stats/buffs, with rarely any middle ground of something simply challenging
• Worthless Professions - The majority of professions just aren't worth picking up as they cost too much to increase the skill or simply offer very little financial return after the money/time investment
• PVP Imbalanced - High level PVP is far too gear dependent with the power creep gained from top tier weapons that can be gained with Astral Diamonds/Zen (the games premium currency) making end-game PVP feel like a real money sink
• Lootbox RNG - The Lootbox business model is based on RNG (Random Number Generator), making it totally random what players get (essentially Gambling). A lot of the really decent stuff is put in the RNG lootboxes making it a bit of a powerful money grab
• The Foundry - We have a love-hate relationship with the Foundry, for everything it can do and its potential, it has some frustrating restrictions: missing creatures, item limits, no branching quests, low number of players can access it together (ie. no Guild Foundry quests) 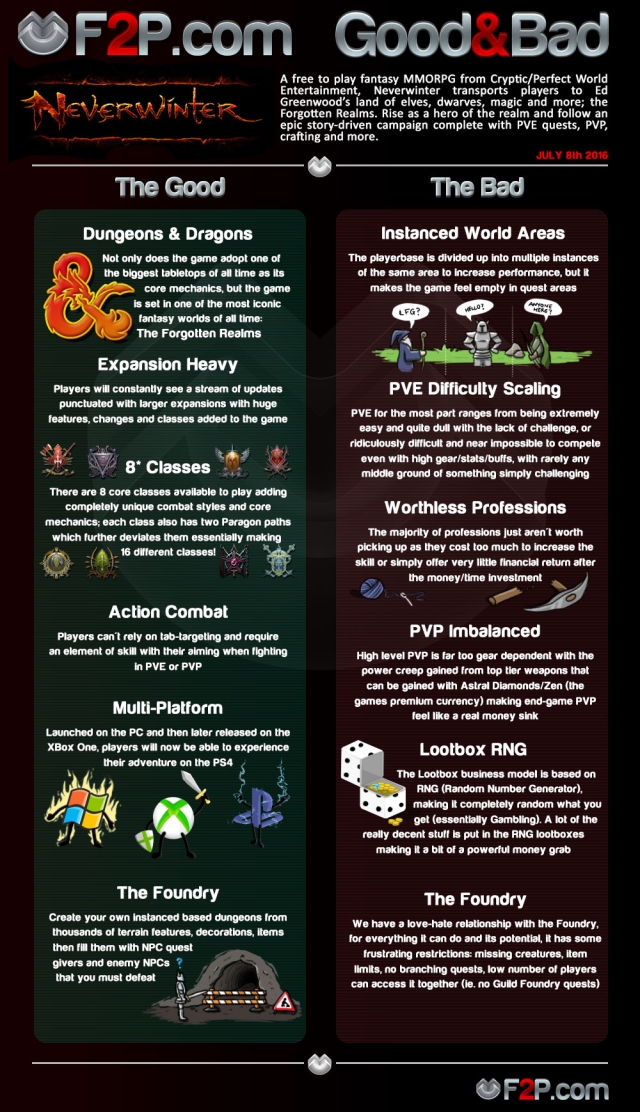