Interesting fishing mechanics, wiki links for all fish in the game.

Recently we took out a little time to give a little more time and attention to World of Fishing from developers Masangsoft, their latest free to play fishing simulator available where players can get together and compete with each other or just fish for fun. Straight up we’ll say if you’re not into fishing, or like the idea of fishing, skip the game because it is an extremely mild paced casual MMO that isn’t going to appeal to the masses, but for trying it out for a few hours and getting a first impression whilst it might have had the mild nature of a calm ocean it definitely lacked its depth.

Character creation is fairly basic, a couple of base character to choose from with some elements of appearance customization left us with a handsome grey haired father figure that probably loves to take his son and grandson fishing down at the bend every weekend. The customization element only really comes into play when you start buying clothing to dress your toon up, everything from fedoras to sandles, more appearance geared than anything but they do offer some stat boosts. Gear is mostly for the fishing equipment you can buy; rods, reels, lines and all that tackle, level locked and purchasable with in game credits or real world cash, it’s a fairly linear setup purchasing items directly from the shop, though some items can be picked up through quests. The questing itself is an attempt at a story driven element and a way to hand out consumables and extra cash, completely unnecessary given the theme and genre, but doesn’t detract from the game.

The games consist of two modes to participate in, Freestyle or Team play, the first just being a casual fishing mode to sail around and catch fish for fun, currency and XP, or Team play where you compete against other players trying to catch… well.. fish obviously. The bigger and rarer the fish or the sheer number all give players XP and show a running total of who is in the lead so creating a fun element to an otherwise pretty laid back game. 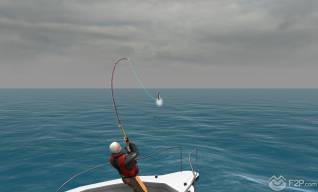 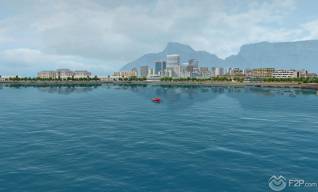 Onto the fishing itself; the tutorial is pretty succinct and tells you everything you need to know and it’s not a bad little system all told. The idea is that you can drive around in your very own speedboat (starting as an inflatable but you can get some nice boats later on) and go sailing around different areas, following your minimap and then picking your perfect spot. Casting into the water is a case of clicking and target where you want the line to go, but we’ve no idea what difference it makes where you cast it, by using an underwater camera you can see that usually there’s no fish there to begin with anyway and then suddenly from the depths a hungry fish will appear and try to snag your bait, providing you’re using a bait that that particular fish likes.

When you get a bite a window pops up showing the float bobbing, with a quick mouse drag the idea is to hook the fish when the float under at the right time to land the best hook, though we still always hooked them even with bad timing but that could be because it was still early game. From here it’s a wrestling match trying to run down the fish’s stamina by keeping tension on the fishing line, to do this we needed to reel in to keep the line tight, in doing so a gauge on the Tension Bar filled up and the idea was to balance the gauge between two point so that it wasn’t so slack that it didn’t exhaust the fish but wasn’t so tight as it would snap the line. With tension in the bar we could do another mouse maneuver to swing, which would sap the fish’s strength a little more and stun it, then we had to continue winding in until the fish had no stamina left, which results in a catch. Particularly difficult fish can pull really strongly on your line and make it tense very quickly forcing you to have quick reactions and let off the slack, combined with the bigger fish having more than one level of their stamina bar the game definitely does get more challenging as you level up.

Leveling up is a steady progress done by earning XP from a good catch, each fish has a score and quality and ultimately worth different amount of XP, combined with completing quests levelling up gives you access to new gear and new fishing locations around the world. In the various locations there are different types of fish to try and catch, each requiring more unique (and expensive) bait, but by catching them players are able to add them to their personal collection.

Overall the game isn’t bad, it’s nothing amazing and seems generally a little bare bones truth be told and a little too on the linear side where content doesn’t really change all that much; you fish, get currency and XP, buy new gear and go to the next fishing spot, fish, get currency and XP… etc. Other than the different clothing items and prospect of driving around in a cool boat there’s not much glamor to levelling up and other than playing casually or using the game as a chat room to talk to people whilst doing an interactive game we’re not fully sure if the game is realistic or fun enough to keep fishing fans into it. 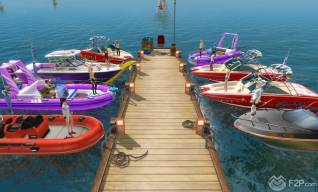 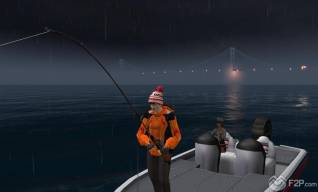 First Look at World of Fishing