The combat system has some tactical elements

Gameplay is grindy, features we’ve seen so many times in other games, mediocre graphics

As you know, recently we checked out Seas of Gold, the new browser based free to play RPG from R2Games where we get to captain our own ship in an age of sail and pirates. Following from many other Asian style RPGs the game has many similarities and a classic gameplay style of building up your character in various ways to make them more powerful and competitive in PVE and PVP.

Our first impressions weren’t the greatest, starting with character selection we had a choice of four pre-made characters (2 males and 2 females) that were seemingly from different factions; however, with no information whatsoever on any of the characters we had no idea whether they were different classes, what the different factions might have meant; there’s was no text whatsoever. With that in mind we just picked the hot looking female because if we have to look at someone then rather that than the bad Captain Jack Sparrow knock-off.

Jumping into the first portions of the game we were greeting by some fairly mediocre graphics, dated to say the least insofar as what we’ve come to expect of more modern day browsers, but definitely in line with the Asian RPG style. Early content was some linear quests talking to NPCs, being told that the nearby enemy mobs were a threat and that we had to kill them (only to complete it and then be told that the other mobs are also a threat, and the others, and so on). The quest text was about as bog standard as you could get and the RPG element definitely didn’t shine and lacked effort. Having played our character for a little while, and curiosity about the other characters, we can confirm that they all start in the same place and have the same quest chain; unsurprising but disappointing. 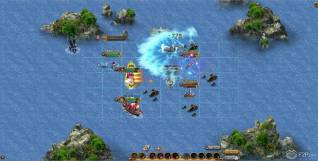 Combat was a big improvement, so often these Asian RPGs have pure automated combat, especially when it is hero/team buildings RPGs such as Seas of Gold is, however the combat is a huge step up. Consisting of an instanced turn based battle the battles take place on a 5x8 grid where you are positioned at one end and the enemy at the other; taking it in turns you can move around and make attacks based off the attack range and movement speed of your ship. Typically the objective was simply to kill the enemy opponents, but occasionally we were met with some alternate objectives such as capturing and holding a certain square on the map. As you can move around it makes positioning extremely important, trying to flank enemies, stop yourself getting pinned in, avoid terrain obstacles, it seemed promising overall.

Outside of combat though there was a distinct lack of innovation and way too much familiarity; it is the same gear grind we’ve seen so often, where the features in the game are nothing more than ways to build up your “Power” score. Features such as enhancing your ship and enhancing pets to improve your character are all too familiar and once more smacked of unoriginality and lack of effort; we would gather materials to build a new ship and then fill its equipment slots with various improvements to make ourselves stronger over and over and over. That is the core of gameplay; get strong, and the features just float around that in and endless loop of upgrading.

Upgrades did enhance your ship in ways that would affect how you could maneuver in battle, allowing for more attack options, more squares of movement, and longer ranged attacks. Unlocking skills was another means of becoming more powerful in battle, but rather than focus on the more realistic options such as improved cannon fire it was taken to the extreme with Poseidon’s trident smashing up enemies, which was kind of out of place.

Where in other RPGs you build up your team/squad of adventurers in Seas of Gold we hired Captains (still from a “Tavern” of course, which is a staple of these games), who we would have to keep upgraded with new ships and gear similar to our own Captain. We could summon these Captains into battle, particularly useful when we were outnumbered, however they were controlled by the AI which we thought was a shame because it would have added a lot more strategy to combat. Without it the combat was essentially an AI vs AI battle with you in the middle doing whatever you want (unless you click auto-fight and the AI controls your own ship as well).

PVP didn’t hold much more in its favour and played out like every other battle; unfortunately you don’t even get to fight against another player and testing your tactics against each other, instead the player you challenge is controlled by the AI. Pretty boring. You can fight for rank and rewards, but the combat is so meaningless when it’s against AI we were extremely disappointed with it; we see no reason why you can’t rank players on an match ranking basis with their wins and losses, not simply allowing players to fight offline players and forcing an AI system.

We played the game for a few hours and honestly, other than the mild strategic combat elements, the game offers very little that is new to the RPG genre. It’s actually even a struggle to call the game an RPG and the quests, as mentioned, were extremely shallow and the game seemed to have no problem with forgetting what type of setting it was supposed to be. The biggest indicator was that some of the later “pirate” ships were steel battleships and a submarine type ship that looked like something out of the television series Stingray.

We didn’t really enjoy the game as once more it is simply using all the exact same mechanics and features as ever other RPG out there with very little attempt to do anything original, and even offering up less than other games. The combat could be fun but the focus on AI involvement takes away the strategy too much and it becomes more about building a strong team, like every Asian RPG. 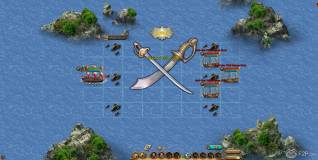 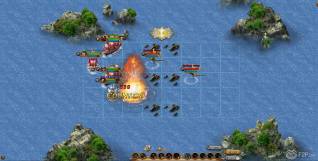 First Look at Seas of Gold