Fairly run of the mill and not much new to the genre, tedious and grindy questing

We took some time to check out Suba Games’ newest title, Luna Online: Reborn; a 2009 title that was cancelled after a poor NA launch and now has been picked up by the Canadian publisher trying to make another go at launching the title in the west again. We were given an account to check out this free to play 3D MMORPG and the chance to pick it up again where it left off at its final state before being cancelled, albeit with a few tweaks and improvements.

It is a fairly typical MMORPG with all the features you would expect, but most definitely falling into the more casual side of things insofar that whilst all the features are there, they’re fairly bog standard and minimalist with very little depth to them. It is a casual title that is geared towards being all encompassing to young players and tweens that enjoy the 3D chibi anime graphics, more social orientated gameplay, and the general lack of focus you need to actually play.

The game does have some more predominant features such as PvP, which is introduced at character creation where you have to pick the Blue Camp or the Red Camp and then are tied to that faction forever and open yourself up to open world PVP in certain areas. There’s zero story behind the two factions, there’s nothing compelling you to choose one over the other, again, it is a feature that is there because faction PVP is fun as opposed to it being a game encompassing feature such as the likes of World of Warcraft or Star Wars: The Old Republic. 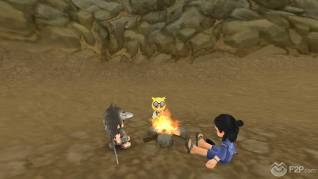 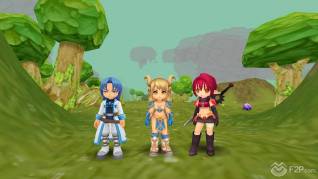 Character creation is a selection of pre-designed character faces, hairstyles and other small customization options, as well as choosing your race, which is the most defining aspect of your character that will shape your gameplay experience. Players can choose from the Elves or the Humans, who are allies in game but both are effectively the same race with the same three base classes (Mage, Fighter or Rogue) albeit they have slight changes based off their racial traits (extra crit chance for humans and extra dodge for elves). The third race, and one that was added later in the original game, is the Majin, what appears to be some sort of dark elf type race, they are the less than favourable race that the Elf and Human allies have been forced to join up with to defeat… some… evil (details were scarce).

Unlike the Elves and Humans Majin don’t actually have a class, which we thought was an interesting option, instead they are more versatile and have aspects of all of the three Elf/Human classes (that are enhanced with different self-buffs). Looking further into it, as it’s not that obvious in the game nor is the website particularly forthcoming with information, but the Elves and Humans at different key levels get a chance to evolve their class, there’s six tiers and generally players have multiple options at each tier based on their starting race and initial class, which overall gives 116 classes in the game… which sounds fairly impressive. Things aren’t quite so customizable for the Majin as they don’t have a class, nor do they pick up extra classes, but they do evolve and pick up new abilities; they seemed the most interesting in this otherwise cutesy game and so we made them our go to pick.

We regret that decision.

They felt particularly underpowered, which in itself isn’t a major issue for us, the problem came down to the sheer mechanics of fighting monsters for our quests. We would get a quest that tasked us with killing a “boss” style mob in an area, we would attack it and do a good 20% of its damage, which was a fairly slow and steady process because our class wasn’t super strong, and then other people in the fairly crowded areas would come and jump on the mob and kill it pretty quickly. Our issue was that it didn’t work on a first to tag basis, or even combining it with doing a significant amount of damage first (so as to stop someone simply tagging it with one hit), it was literally whoever did the most damage got the kill. Regardless of the fact that we’d be the first to start fighting one of these mobs (and it wasn’t just boss mobs that we faced this problem), other players could simply kill stuff way quicker than we could so trying to finish a quest was hard. 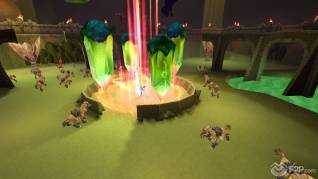 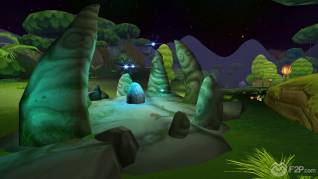 This was all further exacerbated by the fact the none of the loot drops we got could be used by our race, whereas they all seemed to be labelled “Elf/Human” (so they could both use them) and even the vendor didn’t seem to sell stuff for us (unless there was another hidden one for Majin) and we had to rely on our quest rewards to get stronger. Furthermore the quests we had were the same “Kill 10/12/15/20 <monsters> and then kill its boss version” seven times in a row, changing from killing slimes (and boss), plants (and boss), mushrooms (..), turtles and more slimes…. So for three hours of questing we had pretty much the same frustratingly hard to complete grind quests.

Combat in itself was simple, and for PVP we think it would be more fun (albeit we didn’t get high enough in level to experience it) as the lack of tab targeting is always a plus, notifications on the screen kept us informed about attacks happening between the two camps; we just weren’t able to see it for ourselves. The game has features, they just feel like they are all there for the sake of being there, they’re not particularly well done, but not bad enough that they shouldn’t be there, but instead feel like they are extra things to do outside of collecting costumes and pets and socializing with other players in between decorating your house and other more social aspects of the game.

For the casual player, particularly the younger player, the game is a decent enough stepping stone into the world of MMORPGs if you’re not discouraged by the PVE grind. It looks okay, given the age of the game, and whilst it’s not a game this reporter is all too eager to jump back into, it did feel like the areas were bustling with people and so there’s already a growing community even though it’s only in closed beta. 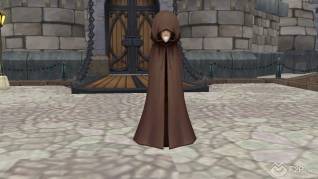 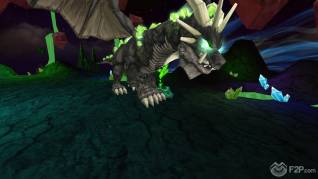