We took some time to try the closed beta of EndWar Online, the recent MMO version of the popular franchise from Ubisoft set in a fractured future after a global war that has left a handful of super factions to fight over the remains of Earth’s fallen cities. The game itself is a real time strategy where players must try to push lanes with their units and destroy the enemy base, having checked out the game two years ago at an Ubisoft press event in Paris it was nice to get a more hands on play of the game.

When starting out we got to choose between two primary player factions; the European Federation Enforcer Corps or the Russian Spetnaz Guard Brigades (I think we can agree both are quite the mouthful). Always one to go with the bad guys (they wear read and have accents, so clearly they must be the bad guys right?) we of course took up arms alongside the Spetznaz to retake mother Russia. The faction choices define a couple of mechanics, though in general it focuses mainly on the direction of the single player storyline, which also acts as a tutorial and a way to build up your own HQ, earn some easy resources and generally give you a simple transition into the game. The actual story content is quite lacking and is generally only seen with little dialogue popups in between battles, not that games like this are generally narrative driven, but games like Command and Conquer did a much better job in bringing a little story to the action. 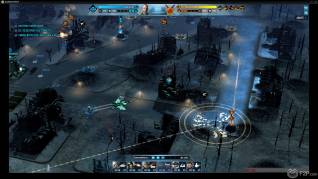 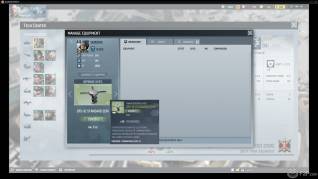 As far as action goes the game does deliver, combat is in real time and consists of two teams (either two players or versus the AI) positioned at opposing ends of a map and linked by two or three lanes depending on the map. Players are able to send their units down these lanes by spending Command Points, a resource that depletes when spent and replenishes over time, units are then pretty much automated and will make their way down that lane and fight any enemy units, defenses or structures that they come across with players having the option of spending Command Points to use a units individual skills. The mechanics follow a classic rock-paper-scissors setup, or in this case a Tank – Anti-Air – Gunship, where each can dominate one unit and be dominated by the other, as well as this there are other units such as Airstrikes that will bombard an area, Infantry that can be used to take strategic points to give bonuses, Artillery that will position at defensive locations off-lane to fire at enemies long range. The objective is to push the lane to the enemy base and destroy it, though in the single player Campaign there are alternate sub-objectives such as destroying the base within a certain time, or retaining more than 60% of your army.

The units you take into battle depend on the Commanders that you bring into your team, unlocked by acquiring and spending Fame these Commanders have their own skills and units that they can employ in battle, as well as being able to level up themselves for stat boosts and their skills (as well as acquiring new ones). Furthermore by acquiring blueprints you are able craft components to equip to your units, so overall there is a very wide scope for customization and individuality when it comes to how you want your team to be set up and what type of tactics you want to employ. 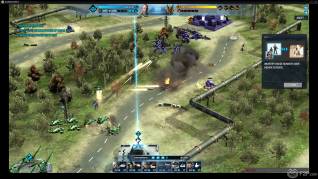 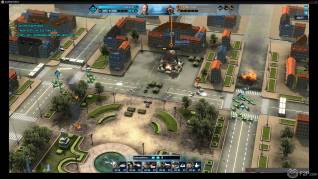 The game does offer both PVE and PVP, the PVE being the main single player story-arc that focuses on players capturing new regions on their journey for total domination, each region captured gives rewards as well as ongoing Energy resources used to upgrade your main headquarters that will by default upgrade your weapons. The AI combat is extremely reactionary for the most part, as you can see which units the enemy are sending down the different lanes then it is easy enough to simply send the direct counter each time and as often as not you will destroy all their units before even firing a shot on their base. PVP is different, primarily that you can’t see the enemy units until they are within range of one of your own units or controlled structures, so here we had to balance out being aggressive and focusing on a strategy and trying to change it on the fly depending on what we encountered. With Infantry and Artillery capture points it pays to be aggressive and get these points early, getting a strong map foothold, but it also means taking a chance with which units you initially send down a lane blind.

There are two different primary PVP modes in the game; Fortress and Skirmish. Fortress has players fight against each other’s teams, but not the actual player themselves, each player will determine which of their Commanders and their respective units they want to act as their Defenders, and if a player attacks you then they will play a game against your team with the AI controlling them. When attacking you are in control, but similarly will be facing an AI opponent. Skirmish is the actual PVP and playing against another player, which is unlocked at level 25 and would take quite a few days for casual players to unlock (something we weren’t exactly thrilled about), though 1 v 1 PVP is also available in Friend mode which is unlocked a lot sooner. It does seem like an unnecessary barrier to a portion of the game that, realistically, the majority of players I imagine are going to want to play, but instead are forced into AI matches for some time. 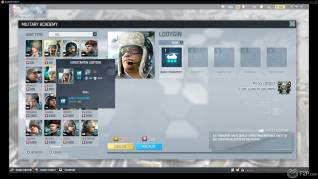 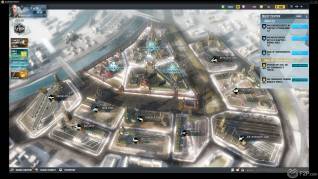 Our “pet peeves” don’t stop there, there’s a lot of little things that annoy us such as the slightly poor graphics in some areas, you can see it particularly when the game zooms in at certain points with really blocky jagged edges on shadows and low textures. It’s just not acceptable of a browser game coming from a studio/publisher as big as Ubisoft and part of such a reputable franchise (Tom Clancy). Another peeve is how many “Asian MMO” features seem to be in place, all the icons, bells and whistles trying to get you to buy gold and get VIP status, or the “Auto Battle” feature in the single-player Campaign where you can auto complete the battles for regions you already control to get the rewards. As the game gets on players will be spending a lot of Energy, and the fact that there’s a “Refresh” option to spend real cash to replenish it… again… there’s very few Asian MMOs with these features that we’ve enjoyed and so it just puts a bit of a bad taste in our mouth.

Aside from that the game is actually enjoyable, for its negatives overall the game comes out on top and the strategy element is definitely interesting with team compositions, on map strategies and the requirement for offensive and defensive play. PVP is going to be the driving factor for most players ultimately, yet even with the amount of customization it’s hard to say whether there is longevity in the title or whether it may grow stale after a while; we definitely hope not.

We love about EndWar Online