A bit of a grind building up your collection of components, quick matches make quick rotations on maps so they can get a little old very quickly

This past weekend we played Crossout (developed by Targem Games and published by Gaijin Entertainment), a post-apocalypse themed vehicle shooter where players get to battle in team-based matches across a variety of maps and modes driving weaponized vehicles that they get to design and build. For our playthrough we were provided a promo account complete with a bunch of components, epic purple items, currency and everything we would need to build up some different vehicles. What we didn’t have was the experience, so being given the tools to make some crazy powerful vehicles, but having no real idea what we were doing… it’s a dangerous combination.

Jumping into the “Build” option we had a free slot to experiment with the crafting side of things, an open garage and some accessible tab menus allowed us to build a vehicle from the chassis upwards; choosing our frame, what types of wheels, cab, weapons, engine and armor. With our promo account (and like 500 loot crates to open if we wanted to) we were spoilt for choice on what to go with as there are an absolute ton of options, again here is where our experience would let us down as whilst we could make anything, that didn’t mean we could necessarily make anything good. We spent a little while going through the different items but in all honesty we just wanted to make something that looked badass and we were attracted to an automated turret and flamethrower to mount on our vehicle. The crafting system alone is a hell of a lot of fun, being able to clamp together different parts, rotate them around, it offers a lot of flexibility and customization whilst still confining players to certain parameters. Vehicles are limited by the number of parts, amount of energy used, and mass, which means you can’t have a vehicle made of hundreds of pieces (think of the load times in game as each of those pieces has to be accounted for as its blown off your vehicle) you can only have so many components (such as a certain number of powerful weapons) and your vehicle can only be so big; all good things. 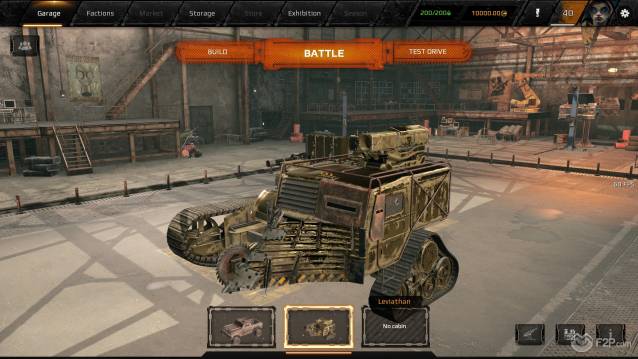 In battle our experience showed in two ways: firstly our vehicle sucked in combat, which wasn’t that obvious after doing the test drive, but once we were against real players and seeing their creations it was clear they might have spent a little more time or had a little more experience crafting. We were a little on the slow side, so always the last one to get into battle, which was poor given that we were a fairly close quarters vehicle with our weapon choices. The second issue was that, well, we just weren’t that good at the game. Whether it was controlling our vehicle (which in fairness our unusual yet cool looking design played a big part in) or simply having no idea of the map layout or where the enemy might come from, we spent more time being blown up than we did playing. This resulted in a kamikaze approach of just getting into the middle of battle and setting everyone on fire, which was at least a lot of fun. From the death screen we could cycle through our teammates and watch them fight, as we were joined by a lot of other promo accounts (and due to naming uses it’s hard to tell if we had a few bots playing as well) which whilst it didn’t necessarily show off any noticeable amounts of skill it did demonstrate how completely different you can make your vehicles.

After a few victories (that we were totally carried through) we went back to the drawing board. Taking a closer look at the weapons we opted for a couple of rocket launchers, including an aim and fire launcher but also a guided missile that when we shot it our camera switch to the point of view of the missile and we could steer it for up to six seconds. In theory this was amazing, and it was responsible for a kill or two, but as often as not we’d miss our target and it’d go flying off into some rocks. It was a purple epic weapon so presumable not one that everyone gets easy access to, but with a little more map awareness and a better aim than us, we’re sure it could be pretty devastating in the right hands. A few games with this bad boy, which we’d decided to give a metallic gold spray job making it look super-pimped, and we were at least having a larger impact on the battle (albeit our timing was pretty poor as switching to our missile camera left our vehicle vulnerable and so often after those six seconds of steering we’d switch back to a destroyed vehicle…). 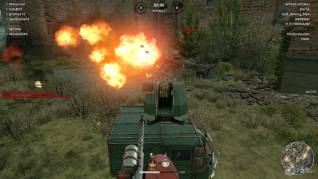 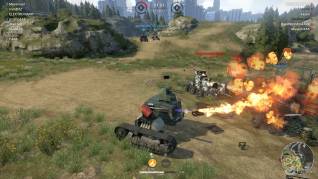 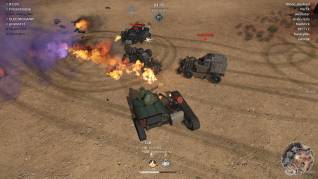 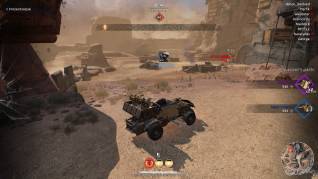 Trying our hand at the Raid modes provided a lot of fun, PVE centric co-ops where we had to battle a lot of bots, we tried out two of the missions one of which was a convoy escort across a map as raiders came rallying out of the woods, the other was defending some oil dump platform in a bowl canyon. Again it was here that our design let us down, we just weren’t mobile enough and our teammates had opted for faster buggy vehicles, able to dash around the map and often get to the raiders way in advance before we even reached them, which meant firing off our rockets was difficult given that our teammates were always bunched up with the enemy. Still, they are a very cool concept, albeit the escort felt ridiculously easy and the platform defend ridiculously hard.

What Targem have provided in Crossout is a really fun vehicle shooter, the stumbling blocks we felt were more to do with our own inexperience than anything to do with the development of the game; everything was simple in approach but complex in design. The graphics were smooth and the environment design was impressive offering up a nice array of maps and accompanying modes. The games are extremely quick, with only a few minutes for each matches time limit, meaning that dying early and having to spectate isn’t that big a problem, but it does mean cycling through the same maps quite often and we’re not sure if this would feel a little too repetitive after a while. 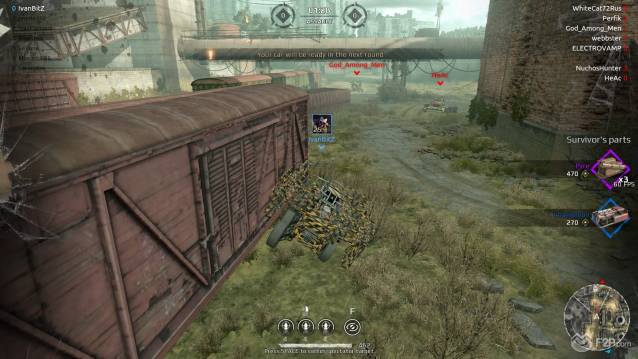 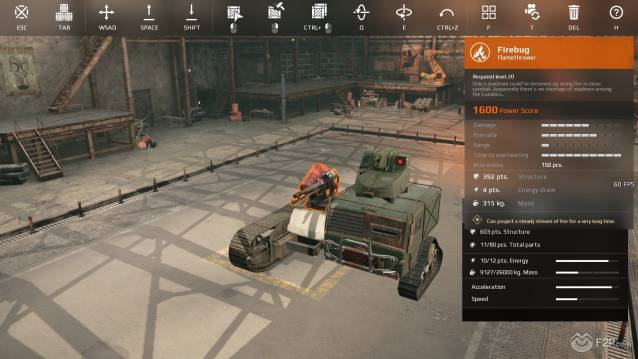